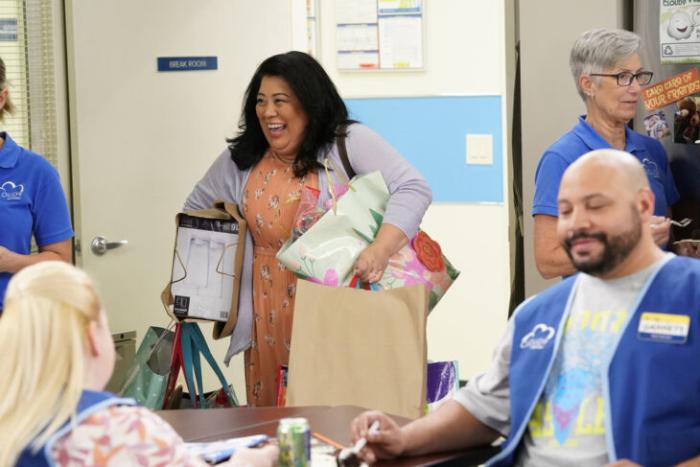 There’s something about a network television sitcom that I respect. Every week, the writers have to fit a three-act story into 22 minutes, try and make it funny while also appealing to an audience in both red and blue states, of different educational backgrounds, and to a broad spectrum of ages. That’s hard to do, which is why I often continue to watch even bad sitcoms. The worst this week was still Sunnyside, which is also getting abysmal ratings (1.3 million total viewers compared to the already low 2.1 million viewers for its lead-in, The Good Place, which at least grows exponentially with delayed viewing and Hulu).

In its second episode, Sunnyside continues to be an all-around fail, made only marginally better by John Michael Higgins, who guest stars as a lawyer who scams immigrants out of their money. Kal Penn is still decent given what little he has to work with, but the supporting cast here is dreadful — dumb immigrant stereotypes who are sometimes smarter than they appear. It’s not a great basis for a sitcom to begin with.

There are no Mateos on Sunnyside, but there is one on Superstore, which reliably delivered another great episode this week, one in which Mateo is released from ICE after it was discovered that he was picked up as part of a union-busting scheme (he’s out, but still faces deportation). Superstore is as good as it is because of a terrific ensemble of supporting characters who are each given personalities beyond, “Wealthy entitled brother and sister” and “woman who works multiple jobs.” I genuinely love each and every character on Superstore, and how it can deploy any one of them for the A-story on any given week.

Bless This Mess has kind of the opposite problem. It has a terrific supporting cast, but the focus is too much on its leads, Lake Bell and Dax Shepard. On the one hand, I like that they use the scene-stealing Ed Begley Jr. character sparingly, so as not to wear out his welcome, but the series would be wise to incorporate Lennon Parham, David Koechner, Pam Grier and Jim O’Heir more into each episode, and maybe bring Susie Essman — who plays Lake Bell’s mother — in for an extended visit.

The second episode of Mixed-ish, meanwhile, was much improved upon the pilot. It expanded its focus beyond Bow’s issues with being mixed-race and not fitting in with either white or black students to the microaggressions that her mother, Alicia, is subjected to at work in a law firm as well as her father’s issues with being a stay-at-home dad in the 1980s. I think this sitcom is gonna be around a long time.

Perfect Harmony is already embracing a formula in its second episode: Bradley Whitford’s grumpy “Yankee” character doesn’t fit in, he’s alienated for it, and he finds a way to ingratiate himself to the locals, this week by trying to catch a pig in the mud. It’s silly but amusing, and Bradley Whitford continues to be a stellar lead, although those supporting characters beyond Anna Camp still need some work. Her ex-husband, Wayne (Will Greenberg), is growing on me, and I am a sucker for the gospel versions of pop songs.

The Unicorn over on CBS, meanwhile, is finding a rhythm, too. It’s clearly going to be a weekly series about Wade (Walton Goggins) re-entering the dating world, juggling that with fatherhood, and soliciting advice from his friends (which this week included Nicole Byer very much playing to type). It’s nice seeing Goggins play someone who is neither a villain nor a kook, not that he’s not amazing in those roles. But I love seeing him as a warm father who is hopelessly naive about dating, as well as his equally naive friends trying to help out. It’s still the best new network sitcom of the fall, so far.

The Goldbergs and Schooled continue to remain exactly what they have always been, although in this week’s episode of The Goldbergs in which Barry and Erica go off to college, it was nice to see Murray take on the Beverly role for once. In its first two episodes, Schooled has brought in a new teacher who is a hard-ass, played by Haneefah Wood, to shake things up, but it has fallen hard into a formulaic rut. Brett Dier is probably the best supporting character on this show, but he’s falling by the wayside now that he’s no longer a potential love interest for Lainey, who seems to be solidly with Barry now.

Black-ish, meanwhile, remains reliably excellent, even though the series is working double-time to find ways to keep Junior at home. They have already lost Yara Shahidi to Grown-ish and it’s only a matter of time before they lose Marsai Martin to Hollywood, so they gotta keep Marcus Scribner around as long as possible.

← What if Smash Mouth's 'All Star' Was a Harboiled Noir | Spoilers: Netflix's Time-Travel Crime Drama 'In the Shadow of the Moon' →