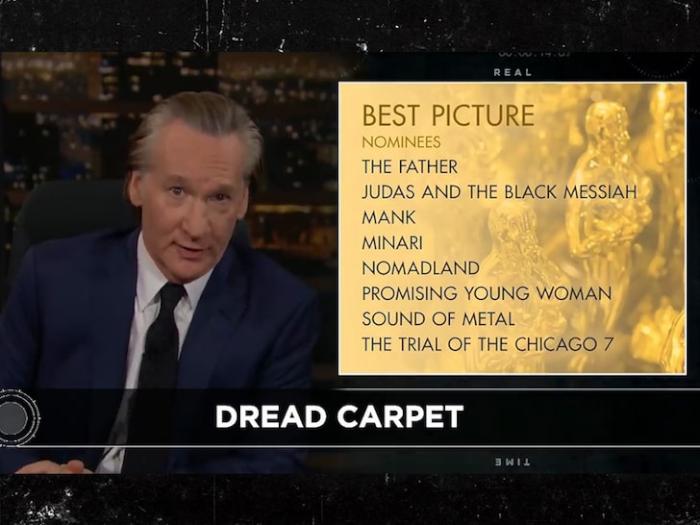 Whatever Bill Maher is these days — the anti-woke police? — I don’t pay much attention to it anymore. Like a lot of older comedians, Maher’s comedic sensibilities got stuck in 2011 when someone called him out for a tone-deaf misstatement, and instead of listening and acknowledging, Maher has continued to double-down exponentially for the last decade until he became the old guy yelling about how depressing Oscar movies are.

Yes, Bill Maher, who suggested this weekend that “you couldn’t have a worse time at the movies if there was an active shooter in the theater,” has decided to return to Hollywood’s oldest tradition: Sh*tting on how depressing Oscar movies are. The twist, however, is that Bill Maher believes this is a new trend, because he’s apparently never seen an Oscar nominee before, never mind that he includes images of crowd-pleasers like 12 Years a Slave, Milk, and Schindler’s List in a montage of movies that are meant to reflect the good-old-days when Oscar nominees featured a lot more … escapist movies.

Look, Bill: There’s plenty of “comfort food” out there, and a lot of escapism, but, you know, there was that whole pandemic, so they didn’t all go to theaters. Maher, meanwhile, dismisses this year’s nominees by reducing them to their loglines (which is particularly unfair to legitimately inspirational films like Minari and Sound of Metal) and claims that “virtue signaling” has ruined Hollywood like it has ruined most of the Internet and the New York Times.

I guess I just find it interesting that — despite Hollywood’s decades-long obsession with depressing movies — you know Harvey Milk was assassinated in the end, right? and that The Piano was about a mute Scotswoman, and that Erin Brockovich was a single mom who goes after a power company for its role in causing cancer? — that Maher has decided to take this year’s nominees to task. You know, the year in which two female directors have finally been nominated in the same year, including the first Asian woman! Or the year in which the immigrant experience is highlighted, or the year in which rape-culture is exposed, or the year in which the first Muslim was nominated for Best Actor, but then again, I suppose, calling attention to the successes of anyone who is not Clint Eastwood or Steven Spielberg is apparently “virtue signaling.”

Shut up, Bill. Just shut up.

← Mid-Morning Briefing: Vaccines Work, Trump Won't Meet with Gaetz, and White Replacement Theory | Amber Ruffin Has A Style All Her Own And That Deserves To Be Celebrated →