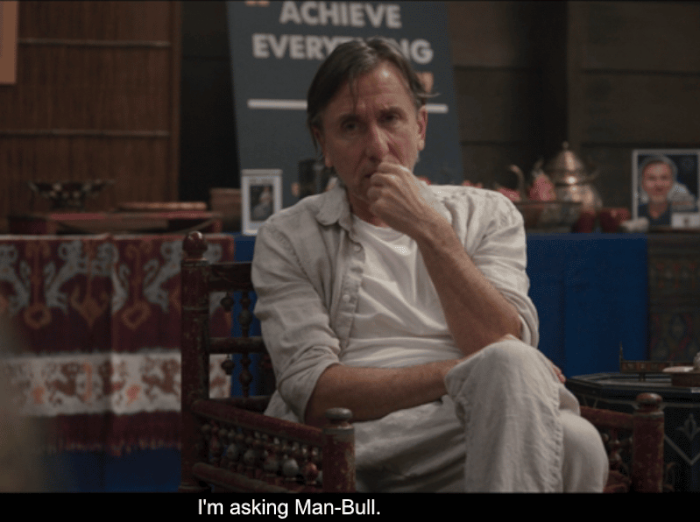 'She-Hulk' Sits In With Guru Emil Blonsky And His Very Real Comic Clients (No, Not Daredevil)

Last week She-Hulk stepped away from the courtroom (and from the promised appearance of Daredevil) to attend a wedding, and guess what? This week the show doubled down on its diversionary tactics by heading over to Emil Blonsky’s spiritual compound to have a big ol’ Murdock-less therapy session. Personally, I’m all for this bait and switch (and switch) and hope the show keeps it up. Has Jen ever broken the fourth wall at Disneyland? Has she taken Nikki on a wine tour in Napa? What’s stopping her? There’s only two episodes left to go this season anyway — just drop Charlie Cox in an end-credit gag and be done with it.

Just so long as I never have to hear the phrase “hurtin’ for a yurtin’” again.

Episode 7 picks up where we left off last week: Contemplating the central mystery of “Is Josh a prick?” Josh, you’ll recall, is the very handsome man who flirted with Jen at the wedding. Josh may or may not have a secret, and that secret may or may not involve him being the groom (a theory, per Mike Redmond, that I’m still clinging to by my fingernails). Turns out Jen and Josh exchanged numbers because this week they start going on some disgustingly cute dates together. They take things slow, have fun, and after the third date they finally spend the night together.

And then Josh ghosts her. He ghosts goddamn She-Hulk.

Jen spends days glued to her phone, obsessing over the silent treatment, until a worthwhile distraction arises in the form of her client Emil Blonsky. His parole officer asks Jen to accompany him to Emil’s compound, to check on a glitch with his ankle monitor (just in case he’s, you know, gone all Abomination-y) and while she’s there, her Prius gets totaled by a dude called Man-Bull (“a weird lab experiment, don’t ask”). Man-Bull is just one of several super-clients staying at the compound — called Summer Twilights — and getting help from Brother Blonsky and his on-site yurt. She-Hulk may not always deliver the A-lister you want, but it always manages to find a Z-lister from the comics that you’ve never heard of to compensate. Last week it was Mr. Immortal, and this week it’s (checks notes): The Spanish swashbuckler-not-matador El Aguila, the ancient vampire Saracen, the supersuited Porcupine, and yes, Man-Bull. If you wanna read too much into these character selections, then sure, it might be worth noting that Porcupine has a history of tangling with Hank Pym’s Ant-Man, and El Aguila is a mutant who has helped Luke Cage and Iron Fist, and Saracen was introduced in a “Blade” comic, and Man-Bull is an enemy of… dammit… Daredevil. All of that could be hinting at things to come I suppose, but none of that backstory matters here. What matters is they all have identity issues they’re struggling with, and you know what? So does Jen. She just doesn’t realize it until Wrecker shows up.

If you don’t remember Wrecker, don’t worry. Jen demands the episode cue up an additional “Previously On” segment to remind you that he was one of the goons that jumped her to steal her blood a few episodes back. She transforms into She-Hulk and tosses him across the room, but violence is a big no-no in Guru Emil’s sessions so instead she… joins the circle to talk.

She-Hulk has toyed with the Jen vs. Shulky identity crisis all season, but this week’s episode lays the cards on the table in a really beautiful way. While Bruce was always dealing with Hulk as a separate entity inside his body, Jen really IS She-Hulk internally. Instead, she’s struggling with the external perception of her two selves and the way She-Hulk’s popularity overshadows her. That’s why she became so invested in her relationship with Josh, because he liked her as Jen first and accepted her green side in stride — and being ghosted felt like an even larger rejection of her because of how much she’d projected onto him. Wrecker and the rest of her therapy buddies help her arrive at this realization and encourage her to delete Josh’s number, then embrace her for both sides of herself.

The thing is, Wrecker does really seem like he went to the compound to improve himself… which is why I’m a little confounded that he didn’t spill the beans about why he attacked Jen in the first place. She needs that information now more than ever, as the episode reveals in its final moments. Turns out, Josh didn’t just ghost Jen like a normal prick. He slept with her, then copied her phone data and TOOK A SAMPLE OF HER BLOOD while she snoozed. He even took a pic of her sleeping with the flash on, which truly is big creep behavior. No flash, my dude!

And he did it all for the “HulkKing”: 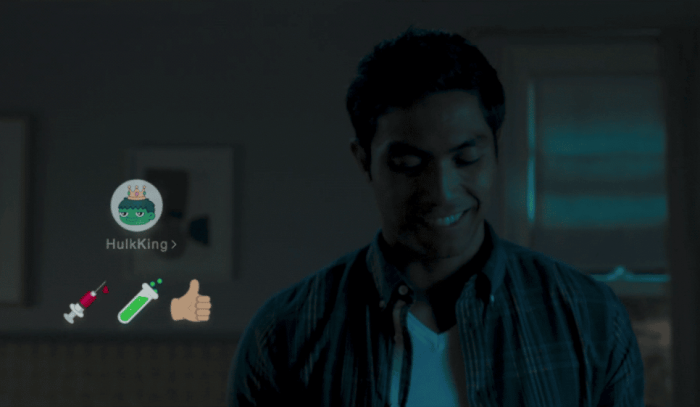 Look at that prickish smile. Pure evil. And you know what? He could still be the groom! We never saw who Lulu married! I mean, presumably, Jen saw the groom during the ceremony, but… Look, just because we know one of Josh’s secrets doesn’t mean we know them all, that’s all I’m saying. He could be married to somebody.

— Tim Roth is absolutely eating New Age Emil, and it’s so much fun to watch. His reprisal in She-Hulk is very similar to Wong’s, in that their first appearance is pretty true to the character’s established MCU identity while their second reveals a delightfully unexpected home life. I can’t say any of Emil’s clients had the immediate impact of Madisynn, but I do hope his little retreat pops up in other corners of the MCU pipeline. There’s certainly plenty of characters who could use some help.

— Jen watching Miss Piggy rip prison bars apart reminded me that Disney owns the Muppets and goddammit, She-Hulk vs. Miss Piggy is a crossover I’d watch in a heartbeat.

— No end credit scene for the third week in a row, though the credit artwork does a lot to fill in the gaps (Porcupine dropping his suit off at the cleaners was at least worth a chuckle).

— I have struggled all season with not calling Jen “Jessica Walter” in these recaps FOR OBVIOUS REASONS, and this week I finally got through the whole thing without a single mistake… only to call Man-Bull “ManBearPig”. Anyway, I’m great at my job.


← Review: 'Bros' Is A Good Top In Search Of A Decent Bottom | Netflix's 'Kleo' Is the Darkly Comic (East) German 'Killing Eve' →