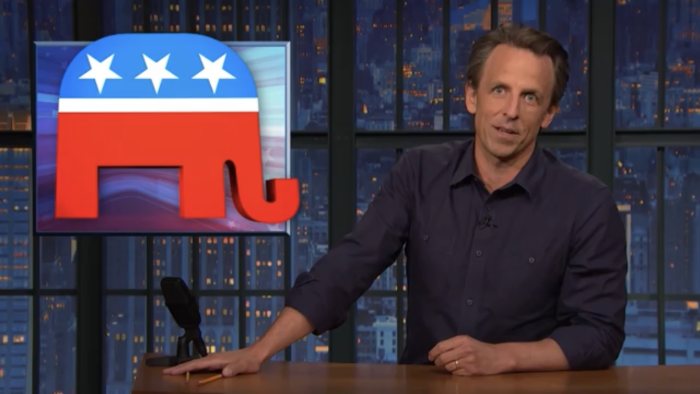 Seth Meyers’s Closer Looks (segments where he dives deep into current issues) are quickly becoming one of my favorite things to watch. When it’s early, and I’m trying to drink coffee while attempting to calm down one of my newborn twins and feed the other so my wife can get at least 45 more minutes of sleep, Meyers has become my pacifier. The segments are funny, insightful, and delivered with expert precision. Last night, that precision was aimed at the Republican Party.

If you’ve been fortunate enough to not be aware of the GOP’s current squawking points, I’ll give you a quick rundown. They claim Joe Biden wants to ban hamburgers and that the president is willfully trying to alienate them. It’s a blatant attempt to get voters against him before the next round of elections. But don’t just take it from me, listen to Seth Meyers.

Isn’t he great? Don’t you feel calm and relaxed? Do you understand everything a little bit better and feel like you could get two babies to bottle feed at the same time if you needed to? Welcome to my world!

Everything about these Closer Looks is effective. They’re a perfect blend of political commentary, sharp jokes, silly jokes, and personality. They will be tied to Meyers’s legacy whenever he decides to throw in the towel, and that’s not a bad legacy to leave.