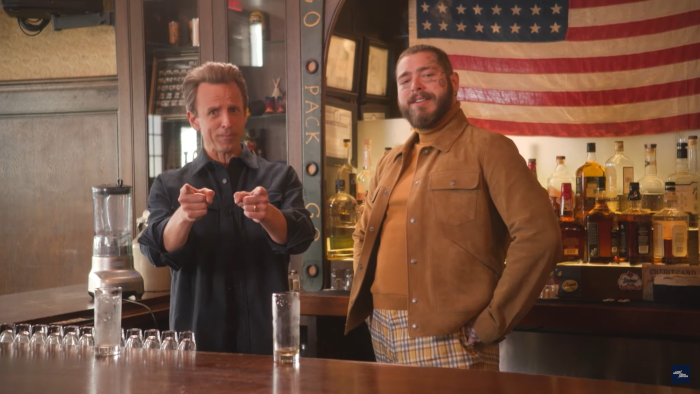 I don’t drink much anymore. My alcoholic abstinence started during the first COVID lockdown. I had two glasses of red wine while watching Mr. Holland’s Opus, got an enormous headache, and decided that drinking would make my time indoors worse. I got to the point where the thought of drinking made me nauseated. That changed today. Watching Seth Meyers go day-drinking with Post Malone made drinking look fun again. That’s what we’re all after, right?!

Seth Meyers day-drinking with celebs is always a highlight-worthy segment. You get to see a different side of them and a more enhanced version of him. The walls come down and it feels less like a stodgy late-night interview and more like a fun first date. There are drinking games, custom cocktails, and laughter! Lots and lots of laughter.

This may be the drunkest that I have seen Seth get, and it starts almost immediately. The two are in a bar on 10th avenue and 50th street and Seth says they are on 10th street. This may seem like a tiny mistake, but as a New Yorker, I practically turned into the pointing Leo gif when Seth messed up. He also misreads the name of a drink, razzes his staff, and tries to play piano, all while fighting back a slur. It’s fantastic.

Most of my familiarity with Post Malone comes from the song ‘Sunflower’ he did with Swae Lee for one of my favorite movies Spider-Man: Into The Spiderverse. That said, I may need to expand my knowledge because he is delightful in this bit. He’s personable, funny, and has a “yes and” mentality that feels genuine. Also, I’m super jealous of his ability to wear a turtle neck.

I may not go mix coffee and RedBull and Four Loco tomorrow (like they do in this segment). That said, day-drinking with a new friend looks like the perfect thing to do right now. The weather’s nice and the world is burning. Time for some shots!