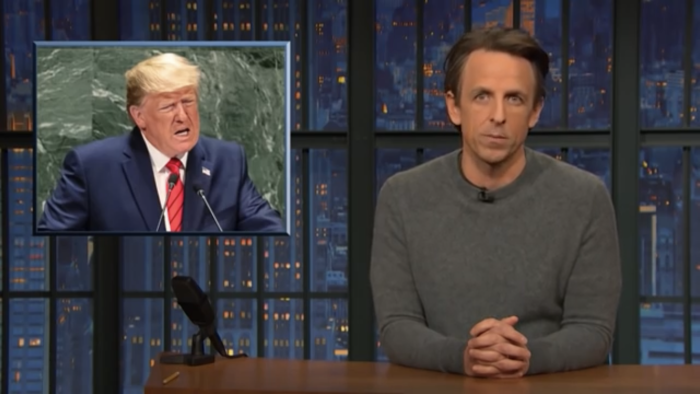 Remember when you were absolutely mortified at the prospect of a comedian or late-night show offering an in-depth look/critique of a President’s actions? Of course you do, because, I’m assuming, if you’re reading this then you were probably alive over the last four years. Or at least three of those years. Shout out to my toddler fans! Anyway, that nightmare is over (albeit still lingering) and now we have a new President for comedians and late-night hosts to joke about!

Yesterday, Seth Meyers offered a “Closer Look” at Joe Biden’s first days in office. While he joked about forgetting the outgoing president’s name (“the guy with the hair”) it was pretty much impossible for Seth to go the whole twelve-minute segment without mentioning T**** and the mess he left behind. If I had to wager a guess, it will be that way for a while. However, it was easier to hear about that bloated, belligerent, bile-based, bucket of bacteria when coupled with Biden just, ya know, doing his job. Even when T**** is out of the picture, we’ll still have people like Ted Cruz to worry about but … more on him in a minute.

While I expected Meyers to be funny, what I didn’t expect was my sincere and emotional joy at seeing clips of Biden working. When Meyers said “the President signed executive orders,” I felt my stomach clench. Despite my tension, I soon felt great relief at seeing which President he was referring to. As I said, T**** is still lingering, like a forced shot of Jägermeister. It will be quite some time until we talk about the President without thinking of him. But it will be worth the wait.

F*** you, Ted Cruz, you slowly congealing pile of coleslaw pretending to be human so that someone, ANYone, will like you because you can’t make friends on your own because no one wants to be around a feckless, spineless, quivering pile of seditious mayonnaise, carrots, and cabbage that defends its wife and father by kissing the ass of the person who insulted them.