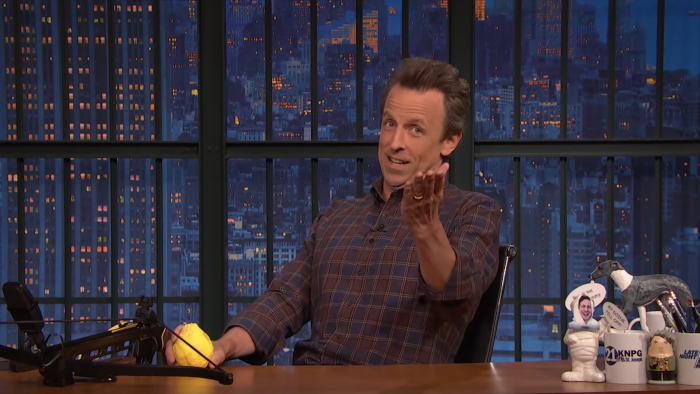 Seasonal Foods are something that people who are not farmers just accept. We don’t know for sure why something is seasonal. For all we know, the farmers could be lying to us. Do you want a navel orange? Well, you have to wait until Oliver Wendell Douglas says it’s OK! It’s bologna, but finally, someone is speaking out against it! Seth Meyers devoted a whole segment to the insult that is Seasonal Foods. Of course, the farmer-backed censors at NBC took issue. Classic corporate cover-up!

All Seth wanted was a nice fig. Is that too much to ask? Are you trying to tell me that my cousin Seamus can grow weed in his mom’s hall closet, but Big Farmer can’t figure out a way to grow figs year-round? I’m sorry, I thought we were living in a technologically advanced age of innovation. It just seems odd to me that I can watch Netflix on my phone, but farmers can’t collect a few fig wasps and start fertilizing.

It’s also sickening that people will just accept corporate censorship like this. NBC takes one of their brightest stars, who they put on the air after midnight, and they act like they have no faith in him! They find his common sense ideas too “radical.” Well, if wanting figs any time of year makes you radical, then call me radical.

Seth is trying to open your third eye! Don’t let NBC stop him!