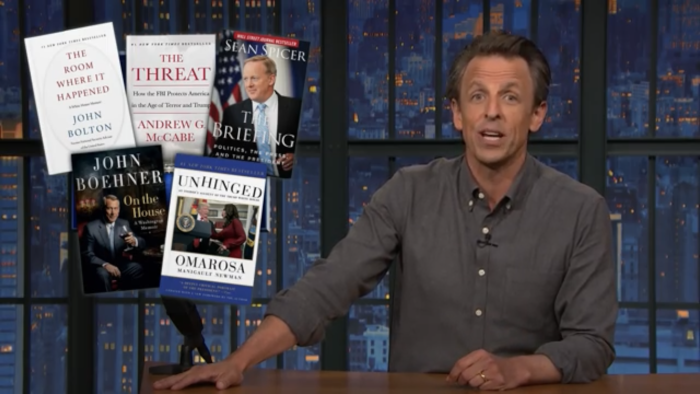 One of my favorite Mike Birbiglia jokes involves him moving a mattress into a new apartment building. A woman opens the door for him and says, “I’m not worried because a rapist wouldn’t have a bed like that.” This leads Birbiglia to remark, “What I should have said was nothing … what I did say was, ‘You’d be surprised.’” This is what it feels like when Republicans, especially those who worked in the Trump administration, decide to release books based on their experiences. A bunch of people who should avoid making things worse and instead lay their hindsight-laden thoughts out in 200-300 pages.

If you’re still with me after I just transcribed a joke, bless you.

I’m not the only one who would rather never hear from the likes of Bill Barr ever again. Seth Meyers carved out a segment of his show last night to take well-deserved shots against certain Republicans scoring book deals. Chief among his targets were former Attorney General Barr and former Speaker of the House (albeit not under Trump) John Boehner. Both men are basically on an apology tour. Seth is having none of it.

I was especially happy to see Meyers take shots at Boehner, who has been giving painful interview after painful interview. He’s projecting “now that your mom and I aren’t together, you and I can be friends and drink too much wine” vibes and it is the opposite of a good look. It’s also unwelcome.

None of the people mentioned in this segment are as wonderful as Mike Birbiglia, but they can take a lesson from his joke that I so expertly relayed. Chances are, though, they’ll keep making the same mistake Mike did.

← Morning Briefing: Sex Work Decriminalized in NYC, and the Bad Chauvin Responses | Serious Question: When Is the Last Time You Watched Netflix? →