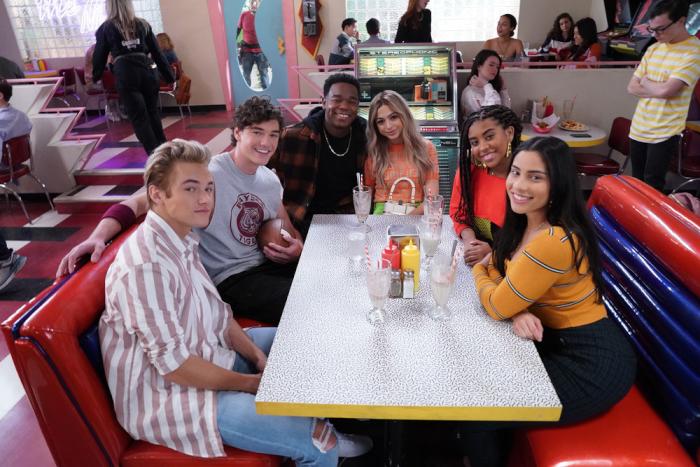 'Saved by the Bell' Review: A Charming, Funny, and Relevant Update to the '90s Sitcom

While revivals and reboots are no longer surprising, none of them can survive on nostalgia alone and often fail to balance the old with the new. Saved by the Bell, however, manages to successfully update the concept of the original sitcom to the present day, offering enough of the ’90s characters without allowing them to overtake the narrative. Meanwhile, the new Bayside High School students take center stage, with the series bringing heart, humor, and discussions of systemic inequality and stereotypes to the forefront in a thoughtful and organic way.

When Governor Zack Morris (a Mark-Paul Gosselaar who slips right back into the manipulative, ridiculous character) pulls billions of dollars from underfunded schools to balance his overspending, he’s called out and guilted into sending the students affected to Bayside High School and others (like its rival Valley High) in wealthier areas. And so, the teens of Douglas High School — the passionate, ambitious Daisy (Haskiri Velazquez), the fun and competitive football player Aisha (Alycia Pascual-Peña), and Dexter (Dexter Darden), the loner who finds a home in the school’s theater program — have to transfer and subsequently acclimate to their new surroundings.

If you’ve seen Netflix’s Elite, the premise of the Saved by the Bell revival is similar, though it’s obviously not melodramatic and there are zero murders involved. It takes them a bit of time, but Daisy, Aisha, and Dexter ultimately befriend Mac (Mitchell Hoog), the extremely privileged son of Zack and Kelly (Tiffani Thiessen), Lexi (Josie Totah), the dramatic theater geek, and Jamie (Belmont Cameli), the sensitive captain of the football team and the son of Jessie Spano (Elizabeth Berkley). Now a published author with a doctorate, Jessie now works as Bayside’s guidance counselor alongside A.C. Slater (Mario Lopez), the football coach and PE teacher who tries his hardest to connect with students.

Saved by the Bell is surprisingly well-written, genuinely funny, and heartfelt. The new characters are actually well-rounded and can carry the show on their own with very little support from the original cast (though Berkley and Lopez do make minor appearances in every episode and have their own subplots). Daisy and Aisha’s dynamic and friendship is the cornerstone of the sitcom and Velazquez and Pascual-Peña shine in their roles. Totah is equally a standout and the series carefully weaves in her journey of being accepted as a trans woman without making her identity her only storyline.

What makes the revival work is its endless charm, comedy, and the cast’s amazing chemistry. Saved by the Bell also chooses to tackle real-world issues (social, racial, and economic), embedding them into the narrative without hitting the audience over the head with it. It’s seamless and natural. Honestly, it’s incredibly refreshing for this balance to exist on a teen show and for Saved by the Bell to include such conversations without being superficial about it.

Amazingly, the series manages to retain its sense of humor and, unlike many comedies, isn’t overbearing in its schtick. The writers certainly know when to lay off, which is good because the possibility of relying too much on character traits or repeated jokes for comedy is too high. There is also the fact that, while each episode is a standalone, the overarching storyline involves the characters coming together as friends and developing as individuals. Their journeys are clear by the end of the season finale and it makes the payoff that much more meaningful.

The diversity of the show also matters and is representative of what an actual school in Los Angeles might look like. The original Saved by the Bell was actually diverse, but it never told its stories from the Black or Latinx perspectives of Lisa (Lark Voorhies, who makes a brief cameo midway through the season) and Slater, respectively. The revival acknowledges that it made a mistake with that, too (I love a show that is self-aware and unashamed to critique its past). At one point, Dexter points out that it must have been hard for Slater to fit in as a Mexican-American in high school and Slater is all like, “Thank you! No one ever mentions that.” Zack didn’t even know Slater was Latinx until college, which is ridiculous.

The revival also makes sure to stay focused on the Douglas students, who are all characters of color (with Pascual-Peña bringing some much-needed Afro-Latinx representation). The Bayside High students get their own stories as well, but the white characters never overpower the narrative and everyone gets a good chunk of screen time to evolve. Did I mention that the show is clever? Because it is. The series finds new ways to be funny and relevant. There’s even an explanation for why Daisy carries around the old-school ’90s cell phone!

Even when Slater or Jessie start to reminisce about their own high school days, they ease back on the nostalgia to recognize how ridiculous some of their antics (and certain storylines) were. The new characters are strong (that includes John Michael Higgins’ hilarious and bubbly Principal Toddman), the writing sharp, and the original characters’ arcs make sense after all these years. I never thought I’d say this, but Saved by the Bell may be one of the best revivals in recent years and well worth the watch.

Saved by the Bell is streaming on Peacock November 25.

← 'Our Friend' Trailer: And You Thought 'Blackfish' Was Devastating | Twitter Responds To 'What's The Best Fake Song?' →