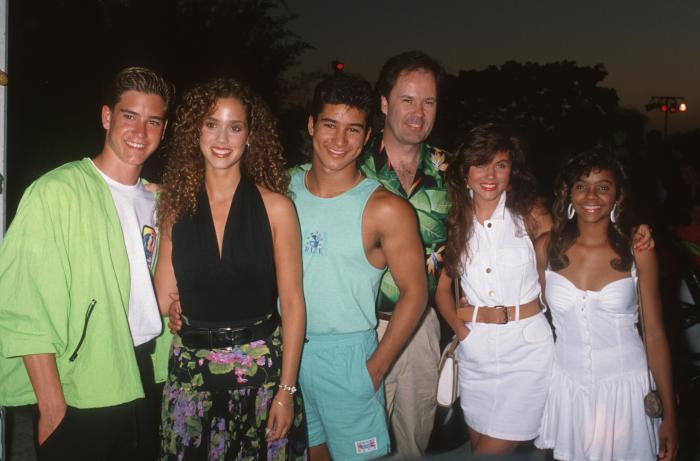 Saved by the Bell, like so many ’90s series, is getting a reboot and headed straight to Peacock, NBC’s poorly named streaming service. A new trailer revealed the November release date and, for reasons that still confuse me, it included a peacock (see what they did there?) strutting through the halls of Bayside High. Who approves this stuff? Was I supposed to laugh?

Anyway, now that the reboot is drawing closer and most of the ye old Bayside gang is set to reprise the roles that made the actors famous, I’d like to call a timeout to go over a few things the first trailer and synopsis has left me thinking a lot about. And no, one of them is not why Dustin Diamond is not a part of the series.

Zack and Kelly have a son, but are they still married?
Zack and Kelly were one of my first ships before I even knew what the hell shipping actually was. Looking back on the couple now, it’s hard to imagine that they’re still together considering Zack’s penchant for chasing after every attractive woman who catches his eye. Kelly also “cheated” on Zack in that frustrating storyline where she kissed, then dated her boss after breaking up with the “blonde Tom Cruise,” but I digress. It’s just that they got married when they were 19, which is SUPER YOUNG and, as ideal as it would be for them to still be together, I bet they had the divorce lawyer on the line right after Mac was born (yes, they named their son Mac. Mac Morris, say that five times fast).

Zack Morris is the governor of California…?
It’s time to pack up and leave the state. The reboot’s entire premise is predicated on Zack’s terrible decision to shut down lower-income schools and then make amends by sending them to more prestigious schools like Bayside. Apparently, the new kids will teach the snooty ones some lessons, how exhausting. Let’s back up though because Zack became a governor, WOW. Hell has frozen over.

Fictional people really voted for this often pretentious manipulator, which is possibly the most realistic thing about this reboot because Zack can con his way through anything. That said, it would’ve probably been more believable if Zack had ended up on Wall Street or became a greedy CEO or something because then his carelessness wouldn’t have impacted a bunch of students AND a whole state. Honestly, the more I break this down, Saved by the Bell’s reboot is starting to sound a lot like the synopsis of Netflix’s Elite…

Mr. Belding must’ve retired, right?
John Michael Higgins is playing Bayside’s principal in the reboot and this man’s whole look screams Mr. Belding to me. He’s decked out in a suit (is this normal?) and has a face that says “hey, I’m a cool principal.” Now, Dennis Haskins is still alive, so I’m going to assume that his character simply retired or got promoted to a higher position in the school district. Mr. Belding hasn’t been mentioned as appearing in the reboot, which is weird because he was a big part of the show. Haskins even reprised his role in the 2015 Saved by the Bell sketch for The Tonight Show Starring Jimmy Fallon. Belding was certainly no Mr. Feeny or anything, but so long as they don’t kill him off on the show then his absence is fine.

Will Lisa Turtle even be mentioned?
Lark Voorhies’ Lisa was one of the best characters and a major part of what made Saved by the Bell memorable and yet, she’s been absent from all of the cast get togethers, the Saved by the Bell sketch, and now, the reboot. According to Voorhies, she wasn’t even asked to return for the new series. WTF?

“I have to admit I did feel a bit slighted and hurt when I was not invited to be part of the Saved by the Bell reunion,” Voorhies said in an appearance on Dr. Oz, “as well as other cast members’ events. Yet of course, I also realized that having this puzzling disorder may have played a major part in that factual decision.”

Voorhies’ mother confirmed that her daughter had bipolar disorder in 2012 and the actress has kept herself out of the spotlight in the years since Saved by the Bell ended. While Voorhies thinks having bipolar disorder is an excuse for not inviting her to appear in the reboot, I think it’s BS. The least the writers can do is give an update on what happened to Lisa. I like to imagine that she became a famous designer and is off in Paris for Fashion Week or something.

← Review: 'An American Murder: The Family Next Door' Delivers A Haunting Yet Humane True-Crime Investigation | Laurence Fox, the Contrarian Attention Economy, and Another Reason Why Cancel Culture Doesn't Exist →