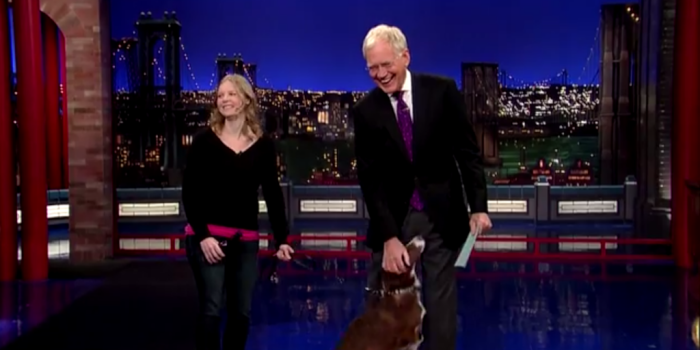 Sarah Silverman Is Resurrecting an Old Letterman Segment, but Alas, It's Not 'Will It Float?'

I don’t know for how long he did it, but for years, David Letterman would bring out a big-ass tank of water and he and Paul Shaffer would debate about whether certain items would float or not. It was so dumb, so low-tech, and so entertaining. It was called, simply, “Will It Float?”

Alas, that is not the segment that Sarah Silverman is resurrecting for TBS. Nor is it the old Letterman segment where he’d just drop sh*t off a tall building, which is infinitely better than whatever these YouTube stars are putting out these days:

Alas, Silverman is bringing back Letterman’s most popular segment, “Stupid Pet Tricks,” where he’d bring out pets with unusual abilities, like a dog who can put three tennis balls in his mouth at the same time:

Seriously, I could watch these old segments for hours, and I suppose if someone had to bring the segment back — with the blessing of Dave’s production company, Worldwide Pants (which is producing) — Sarah Silverman is as good as anyone to do it. Here’s what Deadline had to say about it:

Stupid Pet Tricks, the series, promises to retain all the original segment’s charm, silly fun and appreciation for the often-absurd bond between humans and their animal friends, with Silverman infusing it with a quirky vibe. Each episode will feature a parade of pets … in the quest to be crowned with the coveted title of Stupidest Trick of the Week.

I do hope, however, they’ll make some room for Stupid Human Tricks, too. I still have nightmare about the woman who could bug out her eyes. This is some real Beetlejuice energy:

← The Audacity of Piers Morgan, of All People, to Go After Simone Biles | Jodie Whitaker and Chris Chibnall Announce their Departures from 'Doctor Who' →