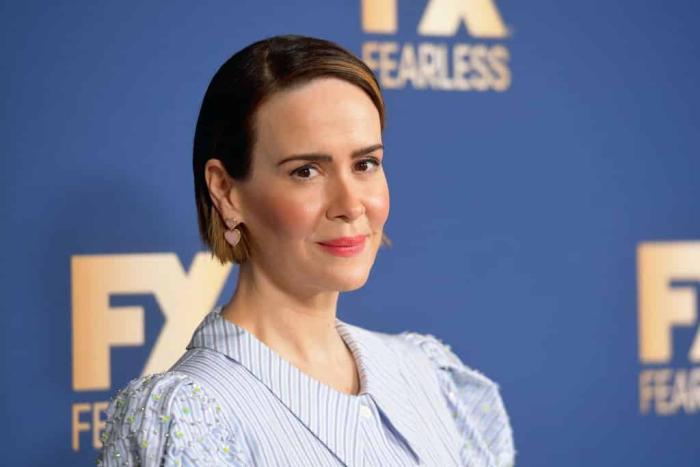 In the upcoming FX series Impeachment: American Crime Story, perennial Ryan Murphy favorite Sarah Paulson plays Linda Tripp, the former U.S. civil servant whose recorded phone conversations of Monica Lewinsky revealed her affair with President Bill Clinton. Tripp was the subject of much mockery in the press at the time, with the glut of jokes focused on her weight. This is something that Lewinsky herself faced, on top of the barrage of abuse and hatred flung at her, something she deals with to this day.

To play Tripp, Paulson donned heavy prosthetics and a fat suit, something that was immediately called out as both insensitive fatphobia and blatant awards bait. Hollywood loves nothing more than watching thin and ostensibly attractive people get ‘ugly’ for their craft. Paulson seems to have noticed this issue and is now talking about it.

In an interview with The Los Angeles Times, she explained her complicated feelings on the matter, acknowledging the real problem of fatphobia in the industry but also giving herself a long leash to excuse her personal choices:

‘There’s a lot of controversy around actors and fat suits, and I think that controversy is a legitimate one. I think fat phobia is real. I think to pretend otherwise causes further harm. And it is a very important conversation to be had.

But that entire responsibility I don’t think falls on the actor for choosing to do something that is arguably — and I’m talking about from the inside out — the challenge of a lifetime. I do think to imagine that the only thing any actor called upon to play this part would have to offer is their physical self is a real reduction of the offering the actor has to make. I would like to believe that there is something in my being that makes me right to play this part. And that the magic of hair and makeup departments and costumers and cinematographers that has been part of moviemaking, and suspension of belief, since the invention of cinema. Was I supposed to say no [to the part]? This is the question.

I also know it’s a privileged place to be sitting and thinking about it and reflecting on it, having already gotten to do it, and having had an opportunity that someone else didn’t have. You can only learn what you learn when you learn it. Should I have known? Abso-f**king-lutely. But I do now. And I wouldn’t make the same choice going forward.’

So. Where to start.

Fatsuits are garbage. All of them. They all look terrible and they’re all an impossible-to-ignore symbol of how the entertainment industry, and indeed the world at large, hates fat people. For them, fatness is a costume to don, something to struggle with then get rid of to show off how talented and committed you are. Consider how every actor who’s ever gained or lost weight for a role has to spend the majority of their promotional cycle talking about it. It’s always spun as this oh-so-difficult endeavor. How could you, a professionally hot person, go to such lengths for your ART?! You must be a true genius. Meanwhile, actual fat actors are marginalized, overlooked by casting directors, and stuck in roles as comic relief, the butt of many fat jokes, or just plain old cruelty. None of this is new, but it’s kind of startling how it continues to this day. Viola Davis wore a fatsuit for Ma Rainey’s Black Bottom, for example.

Paulson’s regretful now, but even then, she’s toeing a fine line. I get it. She’s promoting a hotly hyped series with her regular collaborator and she doesn’t want to throw anyone under the bus. She also admits that it was a good role and one she probably would have been foolish to turn down. But she had the privilege to turn down the role. How many more suitable actors didn’t even get close to an audition? Hell, you already cast Margo Martindale in another role so you knew there were options, FX! The creators of this series knew what they were doing, and they could have taken a different path. Remember when Julianne Moore was supposed to play Lee Israel in Can You Ever Forgive Me? and she was fired then replaced with the far more appropriate Melissa McCarthy? Moore was reportedly sacked for wanting to play the role in a fat suit and fake nose. Yikes. But instead, we got a great actress in a great role and an Oscar-worthy performance.

Paulson can learn her lessons now but it feels too late. She’s already set to reap the benefits of this series and will probably get a ton of awards buzz because Murphy-verse series are Emmy bait. On top of that, we have a whole new season of Oscar campaigning where prosthetics and fat suits are going to feature prominently. Thanks a lot, Jared Leto. Then there’s that Darren Aronofsky film we’re getting next year, which is just Yikes all around. Fatphobia is alive and well and it’s unfortunately now inextricably connected to prestige for thin actors.

← Farrah Abraham Is Suing Harvard for 'Educational Abuse' | Today, the Forever War Ends; Tomorrow, the American Media Forgets About It →