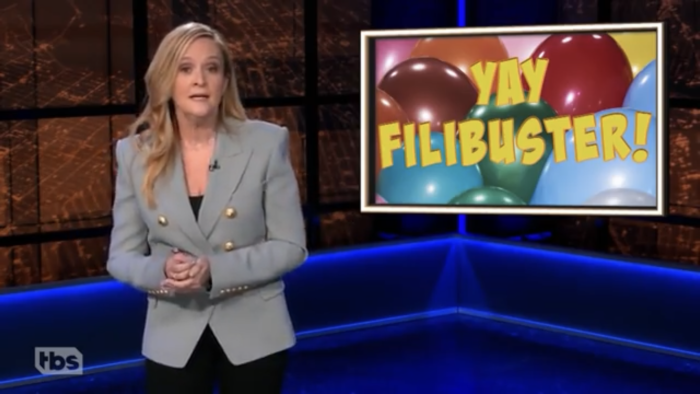 Samantha Bee Says We Need To Strangle The Filibuster To Death

I grew up in a five-person household: my parents, my two brothers, and me. Every now and then we would vote, as a family, on what activity we would do. My brothers and I would often vote for the video store (Hollywood Video 4 Life). There were three of us, so that would win out. My mom, however, hated the video store. So, on occasion, she would decide that we weren’t going to vote.

That sort of minority authority makes sense in a familial unit. It does not make sense in the US Senate. Because of the filibuster, that’s what we’re dealing with. With the filibuster, a vote cannot be brought to the Senate floor without the approval of a supermajority of at least 60 people. In a 100 person governing body, you need 60 of them to get something done, instead of 51. It’s horseshit. Samantha Bee readdressed it on her show Full Frontal this week. She’s discussed it before, but time is a flat, hellish circle.

As she points out, getting rid of the filibuster is currently being held up because of one or two Democrats who claim they are afraid of giving up significant power to Republicans when they eventually regain control. They are asserting that we need to work in a bipartisan manner to truly enact change. Luckily, Republicans are great at passing bipartisan HAHA JK I COULDN’T EVEN FINISH THAT SENTENCE.

The filibuster is a relic of another time that needs to be destroyed or else I’ll never be able to go to the video store again (and that’s the only reason). Until then, Bee will be stuck addressing why it needs to go again and again and again. I don’t wish that on anybody.