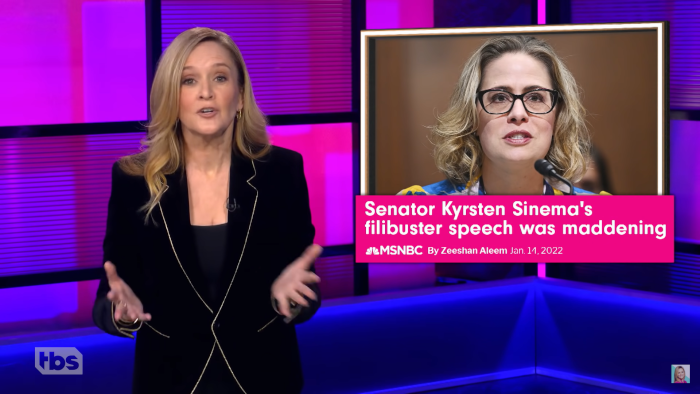 Samantha Bee Explains Why Kyrsten Sinema Is The Worst

There was a time when I was not interested in politics. I smugly drank my 99 cent Colt 45 from the one bodega that wouldn’t card me and laughed about people up in arms over John Boehner. Heck, I only knew his name because of how it looks. Then, I caught wind of a young, firebrand Congressman named Anthony Weiner. He came to the floor with righteous anger and made me think that politics were more than just who the president was. It wasn’t long after I discovered Weiner his career crumbled because he’s a gross moron. My faith in Weiner disappeared, but my interest in politics stayed firm. Part of me wishes that weren’t the case.

Since the election of Joe Biden, we’ve watched his agenda get skewered by fellow Democrats Joe Manchin and Kyrsten Sinema. As Samantha Bee explained on her show Full Frontal with Samantha Bee, Manchin makes sense. Sinema’s motivations are more of a mystery. Just kidding! She’s raking in cash from big-money donors. In two years, when she decides not to run for reelection, she’ll just move on. She conned us right out in the open, and she will likely get away with it.

Sinema was censured by the Arizona Democratic Party. She is losing donors left and right, but it still won’t matter. She won. There is, arguably, irreparable damage done to our democracy, and blame for that will rest on her shoulders. History books will not paint her favorably, and her colleagues will continue to give her a stern talking to. Some will even lash out at her publicly. It won’t matter. She’s going to pull a Steve Miller Band and Space Cowboy outta here. Is that the song I’m thinking of? Doesn’t matter.

There was a time when I was blissfully unaware of the shitty, money-driven machine that our Democracy is. That wasn’t the best thing, but it made life easier for me. It’s a selfish notion, I know. Now, thanks in part to Anthony Weiner, I can never go back. I have to sit here and watch as two people take it upon themselves to choose money over people. Thanks, Weiner.