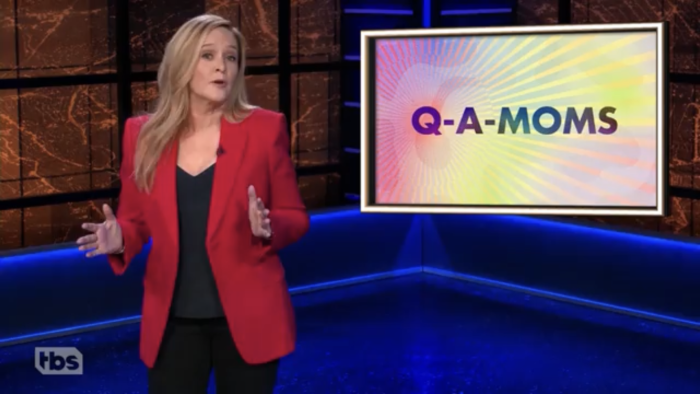 Samantha Bee And The QAnon Qarens

Is there a specific word to describe something you don’t want to hear about anymore unless it’s from a specific source? For instance, I’m done hearing about the NFL, unless I’m watching reruns of The League. For a more specific example, I could go the rest of my life without being told about QAnon, but dammit I’m gonna listen if Samantha Bee has something to say about the bats*** conspiracy theory.

Last night on Full Frontal, Bee took a deep dive into not just QAnon, but its large number of white, female supporters. It appears that QAnon has been empowered by a huge group of Qarens who are led in with promises of saving stolen children, and then they stay for the… elite pedophile rings. Q supporters have even started targeting white women with pastel-colored Facebook posts.

It also wouldn’t be a conversation about Q without a mention of its followers who have made it all the way to Congress. I don’t even feel like mentioning their names. You’ll see them in the clips. Is there a word for something you don’t want to talk about so you won’t? That’s where I’m at with these two.

Take a leap with Samantha Bee and hear about how deep this problem goes. It’s funny and smart (no surprise there) and despite being a subject that grows more exhausting by the day, it’s worth your time.

← Trailer Watch: The Isabella Stewart Gardner Art Heist Documentary, 'This Is a Robbery,' Is Finally Here | The Website for Seth Rogen's Newly Launched Cannabis Lifestyle Brand Crashes Due to Demand →