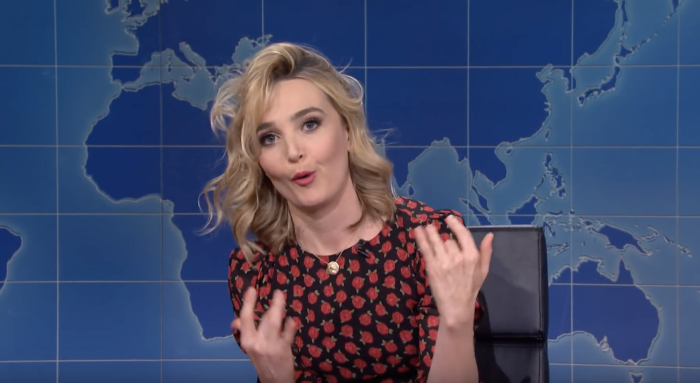 Cold Open — I really like the Democratic Debates on SNL, because when they make fun of Democratic candidates, it’s funny and mostly good-spirited. When they make fun of Trump? It’s just toxic and f**king depressing. Now, let’s get #WhiteObama trending for Mayo Pete, and not ironically! (I swear to God, Kate McKinnon makes me want to vote for Elizabeth Warren once in every state). (Score: 7 out of 10)

Rupaul’s Monologue — For all its problems, I cannot believe we live in a world where the host of one of my seven-year-old daughters’ favorite shows is hosting Saturday Night Live. How f**king lucky are we? 2020 is terrible in so many ways, but not in this one. Ru’s monologue, alas, is just fine. (Score: 6 out of 10)

Charades — A white family and Black family face off in a high-stakes game of charades, and the Black family figures out how to win no matter what rules they’re forced to play under, much to the dismay of the sore losers in the white family. (Score: 5 out of 10)

Chad — Pete Davidson’s Chad is back (“OK”), and Chad is apparently the future of drag. It’s a mediocre sketch and Pete Davidson is unimpressive in drag! It’s still early, but I’m concerned that RuPaul and SNL do not mix well. (Score: 5 out of 10)

Birthday Party Dinner — Two otherwise quiet employees (Cecily Strong and RuPaul) of a company become increasingly aggressive in their defense of a co-worker who is asked to share the cost of the wine during a birthday dinner check splitting, even though she did not drink any of the wine. Other than the fact that Cecily Strong’s character sounds just like her Jeanine Pirro, there’s not much to say for this sketch. (Watch Here) (Score: 4 out of 10)

Storytime with RuPaul — At the public library, RuPaul reads children’s books to a bunch of kids, only she doesn’t read the books so much as she reads the characters to filth. This one is best sketch of the night, except that there are some slight but weird difficulties, either of the technical variety or RuPaul just got lost. (Score: 7 out 10)

Weekend Update — God, they show the picture of Trump that’s been on every social media timeline for two days now on SNL (I just saw that Trump is saying that the pic is photoshopped. It’s not). They are brutal about Trump tonight, and Che blessedly shits all over Rush Limbaugh. It is very satisfying. New cast member Chloe Fineman also comes on “Update” as herself to talk about Oscar performances. She does some impressions, and somehow, her best impression is that of Timothy Chalamet. It is brilliant. The ScarJo impression IN FRONT of Colin Jost is very fun, too. Fineman rules! I love her. Cecily Strong’s Cathy Ann talking politics is pretty good, too. (Score: 8 out of 10)

Thirsty Cops — RuPaul and Ego Nwodim play two thirsty cops who, uh, are thirsty for a man (Pete Davidson) pulled over for texting while driving. It’s dumb as hell, but it’s spirited and the cast is having a good time with this one. I think this is the closest we’re going to get tonight to the Mat sketch of the week. (Score: 5 out of 10)

The Old New York Show with Madge and Dickie — I’m sure this one went over well during the read through. This talk show starring two vaguely Grey Gardenesque hosts reminiscing about the good old days (1994 under Rudy Giuliani) doesn’t work particularly well live. (Watch Here) (Score: 3 out of 10)

← 'Birds of Prey' Review: Harley Quinn Gets By With A Little Help From Her... Friends? | The Rock And Scarlett Johansson Are the Top Earners in Hollywood →