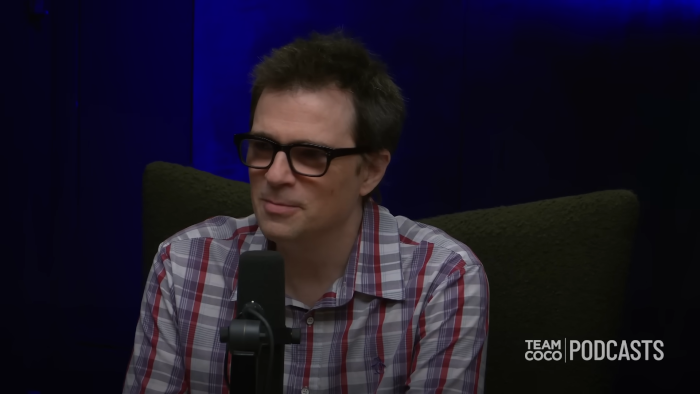 Weezer is my favorite band. Full stop. No runners-up. For me, it’s Weezer or bust. So, I was pretty frigging stoked to see that Weezer frontman, Rivers Cuomo, was going to be a guest on Conan O’Brien Needs A Friend. Rivers can be a bit of an awkward interview. I feel like he has a hard time leading the conversation into any new territory. It was a fun talk nonetheless and highlighted Cuomo’s unique college experience.

Like Conan, Rivers went to Harvard. Unlike Conan, he attended the Ivy League school after he had already gained some fame. Weezer’s Blue Album was already making waves in record stores and on the radio. The band had even started to tour. But the music, parties, and tour buses soon got boring for Cuomo, so he took the classic rocker route of applying to a prestigious university.

What’s even more delightful about Cuomo’s time at Harvard was his inability to blend in, which somehow made him blend in even more. He was sporting long hair and a beard and walking with a cane. Not precisely his look from the “Buddy Holly” music video. It’s also hilarious to hear Conan react to Rivers’ Harvard experience. The idea that the “Island In The Sun” singer just walked up and filled out an application on a tour stop seems to smack the late-night host in the face.

I’m just a big fan, y’all. Weezer’s plan this year, releasing four distinct albums to correspond with each season, is some of the best music they’ve produced in a while, and that’s coming from someone who has stuck with them even through the Raditude years. Hearing Rivers get reflective at this stage of his career was a true delight, even if Conan had to, occasionally, drag it out of him.