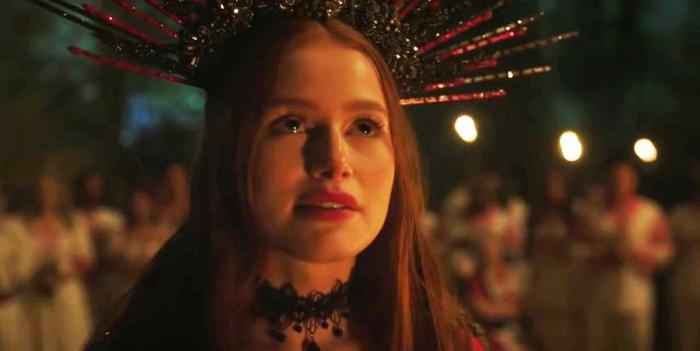 'Riverdale' Kills Off a Major Character with a Spectacularly Lame Stunt

I finally quit on Riverdale midway through its fifth season after all the chaos/delays with the pandemic, but it was a long time coming. I hadn’t liked the series since the first season, and its shenanigans were getting way out of hand. It was like the last four episodes of an American Horror Story season, only it’s lasted four full seasons. It’s full-on nonsense, and the logical continuity of the series has been shot to hell.

Still, I heard vaguely through the Internets that Archie died in the sixth season premiere, and I couldn’t resist: I had to see what it was about. I wish I hadn’t. It’s a farce. It’s meaningless. I hate it, and it gave me no reason whatsoever to jump back into Riverdale.

The long-and-short of it is this: Archie does die. The entire town makes him a blood sacrifice. The town of “Rivervale.” The episode itself pays homage to Midsommar and The Twilight Zone, setting the series in another alternate universe for a five-episode “event” that will eventually bring in Kiernan Shipka’s Sabrina from Netflix’s Chilling Adventures of Sabrina. This is how they do the crossover. By creating an alternate universe where the supernatural exists, and while Riverdale showrunner Roberto Aguirre-Sacasa says it will affect the continuity of Riverdale, I very much doubt that the star of the series has been written out (Aguirre-Sacasa says only that he is dead, and that he won’t appear in the next episode). I blame the MCU for this.

Rivervale picks up where Riverdale ended in the fifth season finale, which is to say: The kids are grown up and out of school, and several of the parents are no longer with the series, including Jughead’s dad, played by Skeet Ulrich, and the Lodge parents (Mark Consuelos and Marisol Nicols). Betty is now with Archie, and they’re contemplating having children; Veronica is with Reggie and they are the town’s new power couple, working together to open a casino; Jughead is with Pop’s granddaughter, Tabita Tate, who just moved in with Jughead; Alice is pursuing Frank Andrews (the brother of the late Luke Perry’s character); and Toni is with Fangs. They have a colicky child together.

Cheryl, meanwhile, is some sort of witch, and she has a coven of archers living on her estate, Thornhill, which is now its own entity independent of Rivervale. Her maple syrup trees, however, have been tapped out, and several otherwise young, healthy women in Rivervale are suddenly barren, including Betty.

Cheryl holds a maple festival, and at the end of the festival, she — and the rest of the town — decide to make Midsommar-like blood sacrifice so that the women can have children and the trees will produce sap again. That blood sacrifice is Archie, and the whole town — including Betty, now pregnant with Archie’s son — goes along with it because it’s necessary to the well-being of Rivervale. And why not? Archie Andrews had devoted his life to protecting Rivervale, so it only makes sense that he would be sacrificed. Cheryl pulls out his still-beating heart, and so ends the life of heroic Archie Andrews.

Sort of. Except that this is a five-episode special event, and special events are not canon, which means that it’s all a meaningless stunt designed to incorporate The Chilling Adventures of Sabrina into Riverdale and give K.J. Apa fans a brief heart attack. Lame.


← The Greatest Sci-Fi Show of the Century Bids Farewell: 'The Expanse' Releases 6th Season Trailer | The Best and Worst of Humanity Contained in One GIF →