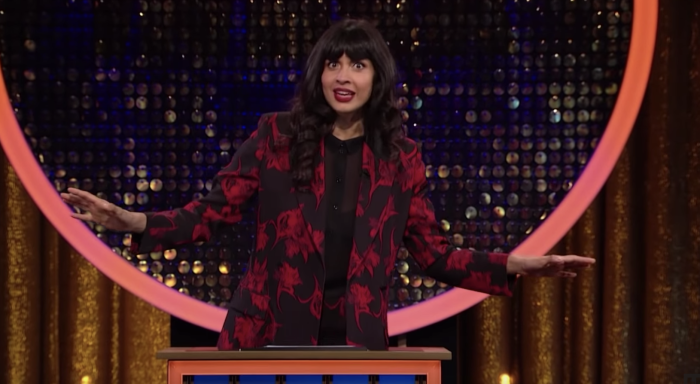 Review: What the Hell is the 'Misery Index' Hosted by Jameela Jamil?

My Podjiba co-hosts Dan and Tori have been talking about TBS’s new game show Misery Index for a few weeks now, and I couldn’t quite make heads or tails of the premise without seeing it for myself. It’s a game show based on a card game called Shit Happens, but the contestants themselves do not have to experience any misery, save for the pain of losing the game. It’s basically a show that offers the host, Jameela Jamil (from The Good Place), and the four members of The Tenderloins comedy troupe (Impractical Jokers) an opportunity to make jokes about viral news stories involving embarrassing and/or painful incidents around the world.

It’s pretty simple. They have a bunch of psychologists rate these news stories on a scale of 1-100, accounting for pain, trauma, and the impact of the incident. That’s the “Misery Index.” At the beginning of the game, Jamil gives a couple of baseline examples to the contestants. 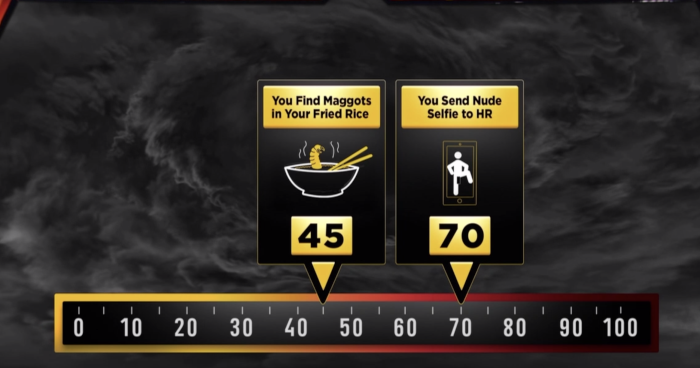 There are two contestants, and each gets to play along with two members of The Tenderloins. Essentially, they are told about a story or shown a video clip, and they have to guess where the incident lands on the Misery Index. Here’s one example used on the show of an idiot who thought it was a good idea to bring a bow-and-arrow to a bear fight (jump to the 1:00 mark).

Because the person wasn’t hurt beyond being “bitch-slapped by a bear,” the misery index was 52, which is to say: More miserable than finding maggots in your rice but considerably less miserable than sending a nude selfie to HR. There’s also, for instance, a story about a woman having an affair who called an Uber to pick up her and her lover only to discover that her husband was the Uber driver. Yikes.

Again, mostly it’s an opportunity for Jamil and The Tenderloins to riff on funny stories about other people’s traumatic events (such as a man whose testicle got stuck in an Ikea chair while he was showering). Jamil was actually a presenter in Britain before landing her role on The Good Place, so she’s a natural at this, and the sense of humor of The Tenderloins falls somewhere in between devastating pun and bad Dad Joke.

It’s silly, but it’s amusing. The gameplay itself is almost completely random and the stakes are fairly low: The winning contestant gets the opportunity to play for up to $30,000 in the final round. I don’t know that I’d ever seek out The Misery Index, but I suspect if I stumbled across it again, I’d watch the episode in its entirety. It’s good-natured, occasionally witty, and if you’re a connoisseur of the kind of funny/horrible stories that often circulate around on social media, The Misery Index is a morbidly enjoyable 23 minutes spent laughing at other people’s misfortune.

← VH1 Announces 'RuPaul's Celebrity Drag Race' | Reddit Asks the Question: 'Which Actor Portrayed a Character So Well That No Other Actor Could Ever Replace Them?' →