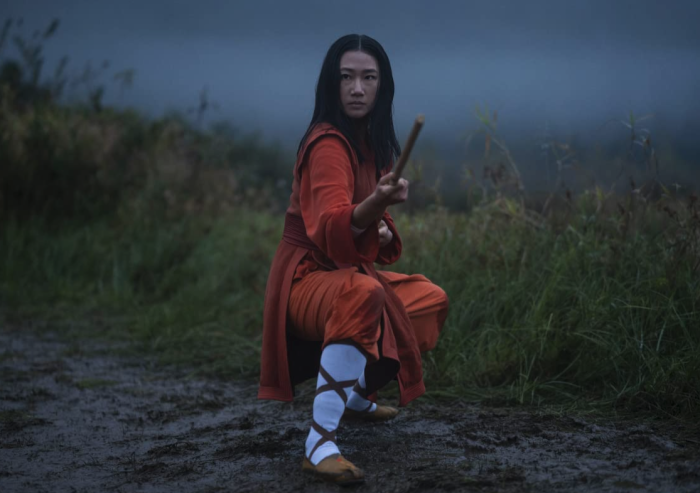 Kung Fu, The CW’s latest prime-time romp, seemingly comes with a lot of off-screen baggage. It’s the first American network drama to feature a predominantly Asian-American cast, and it arrives during a time of increased racist violence against the Asian-American community. It’s also a gender-flipped remake of show from the 1970s that starred a white man, David Carradine, portraying a half-Chinese monk — in a concept that was allegedly stolen from Bruce Lee himself, because networks at the time couldn’t imagine (white) American audiences accepting an Asian lead actor. The fact that it is this show arriving at this precise moment in time could so easily be both a blessing and a curse. This kind of representation is long overdue — and a lot of pressure for a CW show to shoulder.

So let me start off by saying that the weight of all those expectations never seems to burden Kung Fu in the slightest. The pilot episode that premiered last night was exactly the kind of breezy joyride that will bring a smile to your face. There’s a central mystery, a bit of mysticism, and a strong hero who finds her calling in life by protecting others. There’s a dynamic family and community, and a hint of (very sexy) romance on the horizon. It was, as Dustin stated over in our Podjiba Slack channel, “sort of what you’d expect from a CW show, but also it’s the best possible version of that!” If anything, the pilot may have suffered slightly from an overabundance of plot — but it was never boring, and it gave me plenty of reason to tune back in next week.

This Kung Fu, developed by Christina M. Kim, is a very shrewd top-down redressing of its predecessor. She didn’t merely recreate the idea of a wandering monk Western with an Asian-American actress. Instead, she took the idea of a Chinese-American woman becoming a Shaolin monk, and then crafted a quintessentially American story around her. Nicky Shen (Olivia Liang) is the eldest daughter of Chinese immigrants who run a restaurant in San Francisco’s Chinatown. She’s athletic, smart, and even got into Harvard. She is — or was — the perfect daughter. The show begins when Nicky’s mother sends her away for a cultural trip to China, except that in reality she’s there to attend a matchmaking service and find a suitable Chinese husband. So Nicky does what any of us would do when ambushed by the intrusive designs of our parents: she hides in the back of a pick-up truck and runs away, winding up at a Shaolin monastery where all the monks are women — and they’re all learning martial arts. She spends the next three years there, studying under her master Pei-ling (Vanessa Kai). Then one night the monastery is attacked by assailants, Pei-ling is killed by a woman named Zhilan (Yvonne Chapman), and Nicky is tasked with her master’s dying wish: to stop Zhilan and retrieve the mysterious sword she’s stolen.

First, though, Nicky decides to return home and regroup — and try to make amends with the family she abandoned three years ago. Her father Jin, played by the absolute legend Tzi Ma, embraces her in the doorway, while her mother Mei-Li (Kheng Hua Tan) takes one look at her wayward girl and says, “My daughter died three years ago.” Ouch! Disappointed mom alert! Similarly, Nicky’s siblings don’t quite know what to make of her sudden reappearance. Her energetic sister Althea (Shannon Dang) is planning her own wedding and takes Nicky’s return in stride, while her brother Ryan (Jon Prasida) caustically cracks jokes at Nicky’s absenteeism. The family is forced to come together, however, when local thugs attack Jin outside his restaurant, and the kids learn that their parents are deeply indebted to a predatory local gang. The rest of the episode follows Nicky’s attempts to gather evidence against the gang, before they have a chance to retaliate against her family.

But let’s put a pin in that, because remember how I mentioned romance? We need to talk about it! Olivia has a white ex-boyfriend named Evan (Gavin Stenhouse) who is fine I guess. Her mother didn’t accept him, however (hence the matchmaking excursion to China), so Nicky left him. Only now she needs his law enforcement connections to investigate Zhilan and the gang that’s targeting her parents, so he’ll probably be sticking around for awhile. You can ignore him, though, because as soon as Henry (Eddie Liu) turns Nicky’s head when he walks by her in a tank top, you know exactly how this sh*t is gonna play out. Henry, like Nicky, has some martial arts skills — and one hell of a smirk when he’s fighting —but he’s also a bookworm who is down to help Nicky research that mysterious sword I mentioned. Legend has it that the sword originally belonged to a female warrior who protected her village from intruders, and trained other women to aid her. She was, in fact, the start of the Shaolin sect Nicky trained in. The sword is also one of eight legendary weapons that maybe have some magic in them from a sorcerer, and if someone possesses all of them they’ll wield devastating power. But also the sword will only unleash its power when held by its destined master, or something? Look, all I know is that the sword’s handle burned Nicky when she touched it, leaving her with a unique scar, and since she’s currently taking it upon herself to protect her community from violent criminals, odds are that sword is her destiny. Which I’m sure is gonna put a kink in Zhilan’s evil plans.

Point is, keep an eye out for Henry’s smirk and hot infodumps, because goddamn.

As you can tell, Kung Fu covers a lot of ground in its first hour, but it was the kind of self-assured debut that knows exactly what it wants to achieve and lays all its cards on the table. The show introduces an authentic Chinese-American multigenerational family, and wider community, without ever condescending to explain every cultural touchstone to the larger audience. Each character begins with what almost reads as a stereotype — Althea’s over-the-top nuptial plans, Ryan’s lab coat, even those promo images of Nicky in her monk robes — only for those cliches to be knocked aside and dismissed by the specificity of the character work and natural camaraderie of the cast. Despite how plot-heavy the pilot is, it still established each member of Nicky’s family with enough richness to have you rooting for them. Or perhaps I should say that despite all the character introductions, Kung Fu still took care of business, which was to establish the exact sort of call-to-adventure hero tale you’d expect to find on The CW. And what a hero we have! Nicky is a woman looking for her own path in life, beyond the expectations of her parents. She wants to be the sort of sister and daughter her family can be proud of, while still being herself. She wants to bring justice to her mentor and peace to her city. She isn’t afraid to fight for what’s right, though she’s hardly some prowl-by-night vigilante. And maybe — just maybe! — she’s been chosen by a sword for a very special destiny. The point is, she’s a familiar and relatable character while also being a shaped by her cultural heritage — which is pretty much Kung Fu in a nutshell. It may have a lot riding on it but it rises to the occasion, offering something for everyone and making it look deceptively easy.


← 5 Shows After Dark: 'Rebel' Premiere ABC, 'Exterminate All the Brutes' Finale on HBO | Jerry Falwell Jr. Is Telling People to Get Vaccinated Now →