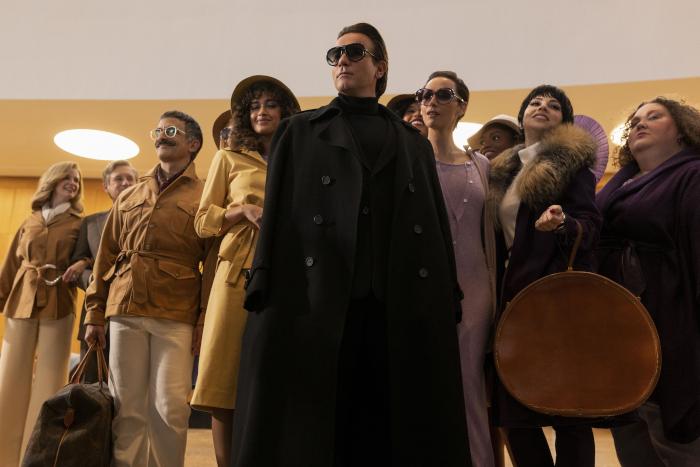 Review: Ryan Murphy Once Again Goes for Style Over Substance with Netflix’s ‘Halston’

There was a period in mid-20th century fashion where the name Halston was ubiquitous with chic. After initially rising to fame through his millinery, which landed on the head of Jackie Kennedy, Roy Halston Frowick reinvented himself as the must-wear designer of American style. Beloved by the likes of Bianca Jagger, Elizabeth Taylor, and Lisa Minnelli (a close friend and muse), Halston became a star in his own right. Eventually, his popularity declined and following a series of misguided business decisions, he lost control over his own fashion house and died of AIDS-related cancer at the age of 57. Today, he’s still considered a towering influence over the industry, beloved by the likes of Tom Ford. It’s not hard to see why this story would intrigue Ryan Murphy, who brings Halston to Netflix as a five-part miniseries starring Ewan McGregor in the title role.

The Netflix era of Ryan Murphy has been a curious one for one of the undisputed giants of modern television. While his shows seem to be pulling in viewers (at least, if the platform’s own questionable numbers can be trusted), critics have been less enthused. Efforts like Hollywood, The Politician, and Ratched have inspired reviews somewhere between disinterested and utterly baffled. Team Murphy with a blank cheque — reportedly $300 million over five years — feels off-kilter in an oddly uninteresting manner. His worst excesses as a creator have taken over, including his notorious ability to be bored with his own work after mere episodes. Those stylistic idiosyncrasies that made him a star — sardonic camp, pitch-black humor, the queer gaze, and a proudly lascivious sense of showmanship — have been stretched thin. His name used to guarantee a sense of excitement for what comes next. Now, it’s one of weariness.

Halston was a man who strived to be unknowable, to reinvent himself for whatever the occasion called for. He seems at odds with the approach of the show, which is primarily biopic-primed exposition. The rest is mostly people saying the word ‘Halston.’ If you want to play the title drinking game, wherein you take a sip every time someone says the show’s name, you may be wrecked before they get to the Battle of Versailles. Episode one starts with a flashback to Roy’s childhood and his mother being abused by his father, a moment that is very close to Walk Hard territory. The flashbacks work better as impressions of his former self, such as a fascinating scene where Halston recalls memories good and bad while putting together a perfume.

As Halston, Ewan McGregor attacks the role with relish. There’s certainly enough material for him to sink his teeth into here. McGregor’s obviously having fun with the ego, the scathing wit, and the performativity of a man always putting on a show. This is Murphy on solid ground, not so much when he needs to go deeper. It takes about three episodes for Halston to start expanding emotionally but by the time it tries to really get under his skin, time’s almost up. His insecurities and abrasiveness in expressing them are prime Murphy material, especially as he pushes his closest friends and collaborators away, but moments like him dealing with his childhood are pure tonal whiplash. This isn’t really McGregor’s fault. We know what he’s capable of when it comes to sharp-edged roles that need a healthy dose of charisma. Hell, just check out his recent turn in Birds of Prey for a recent example of that magic at work. Here, however, he feels underserved and occasionally under-directed.

Broadway star Krysta Rodriguez is well-cast as the oft-imitated Liza Minnelli. Introduced doing her iconic ‘Liza with a Z’ number in a club full of adoring gay men — of course! — she has the theater kid verve without ever slipping into parody. Once she’s allowed to step away from those hugely recognizable moments of Liza iconography, Rodriguez is allowed to be the person. Having seen many Liza drag acts in my time, it was refreshing to see Minnelli be shown empathetically, not as a cycle of tics. Would that she were given more to do. Her friendship with Halston is crucial to both of their stories, and the series quickly side-lines her in a way that does both Rodriguez and McGregor a disservice. Other supporting players get their moments, including Rebecca Dayan and David Pittu as regular Halston collaborators Elsa Peretti and Joe Eula. Shout out to Kelly Bishop of Gilmore Girls fame for her hilarious one-episode turn as the profane and ambitious publicist Eleanor Lambert.

What makes Halston an occasionally aggravating viewing experience is how it hints at so many other fascinating stories. Rory Culkin turns up in one episode as Joel Schumacher — yes, that Joel Schumacher — who briefly worked for Halston, and all I could think about is how perfect his life story would have been for Murphy. The high point of the series, wherein Halston and America’s fashion finest attend the Battle of Versailles, is where the show really comes to life, but it’s too short. It’s there where Murphy and company fully embrace the freneticism and addictiveness of fashion, turning purely aesthetic spectacle into a sport. Watching Halston swan around the crumbling ruins of the pre-renovation palace while bitching at Oscar de la Renta and getting ready to take on the French giants of fashion, I wondered why this story wasn’t considered worthy of more than 25 minutes of screen-time. Murphy is notorious for jumping around concepts and stories before tiring of his own creations, and even though Halston runs at a scant five episodes, you can sense his own tedium setting in.

Certainly, there is much to be mined from the tension between art and commerce, which defined much of the latter era of Halston’s public image. Bill Pullman plays a suitably smarmy businessman who buys control of the Halston brand, and most of the series’ conflict comes from the fight for Halston’s creativity in the face of growing dilution of his brand. Halston hates the business side of fashion but craves the freedom the money offers, a familiar dilemma for many. As he sells out hard, a lot of which we don’t see, we sense the work getting worse and Halston’s panic seep through into his already chronic drug habit and growing isolation. When your work is your passion and you stop caring, how does that stifle you?

There are enough Murphy-isms here that work in tangent with the Halston story. In one scene, a parfumier played by Vera Farmiga huffs the smell of a jockstrap as if it’s a bunch of roses. The tension of Halston’s life as a public brand and semi-closeted gay man at the dawn of the AIDS epidemic inspires moments of sharp pathos akin to Murphy’s work at its best. The increasingly cheap-looking ads for Halston-branded everything are inspired moments of Murphy camp, and the show nails the hedonistic magnetism of Studio 54 (another story I’m surprised Murphy hasn’t optioned already.)

The most obvious comparison fans will inevitably make with Halston is the Murphy company’s last foray into the world of iconic fashion designers, American Crime Story: The Assassination of Gianni Versace. It’s not entirely fair, of course, because that show was less about Versace than it was a murder mystery centered on the systemic homophobia of America that Versace and other LGBTQ+ people found themselves steeped in. Halston isn’t quite so ambitious. This is intended to be a story of a singular figure, but beyond the style it lavishes upon the viewer, it doesn’t seem concerned with saying much else about him. Style, of course, can be massively entertaining. Murphy’s brand is heavily dependent on that initial thrust of visual dazzle that seems tailor-made for gifs and Pinterest boards, and it’s here. The costumes are predictably fabulous, the production design engulfs you in the glamour of old and new money through the disco decade, and the music budget was put to good use with some classic pop of the time.

Halston posits that, all too often, art and cash are incompatible, even as the relationship remains wholly necessary. You can’t create without some sort of financial support, but the drive to make more and more money will inevitably weaken your work. Murphy has never dabbled in subtlety, so I’ll leave you to draw parallels between showrunner and designer at your own pleasure. It certainly feels true that Murphy has become weighed down by the faux freedom that his Netflix mega-deal offers. It feels like all we think about now with his work is the obviously exorbitant cost of it all. That should work well with Halston, the story of a man brought down by various excesses, but there’s a distinct lack of force behind it all. That’s not to say the show is devoid of entertainment. Even Murphy at his most uninspired inspires a primal response from his audience. Still, as his slate of Netflix productions continues to expand, one can’t help but wonder if Murphy will ever find what he’s truly looking for.

Halston is now available to watch on Netflix.