Review: 'Outmatched' Is a Dumb Show About Smart People For a Dumb Audience

I genuinely like the premise for Fox’s new sitcom, Outmatched, and I appreciate that it gives Maggie Lawson (Psych) some work, along with Tisha Campbell and former SNL cast member, Finesse Mitchell (Jason Biggs is also in this, too, for what that’s worth). However, the show itself, which comes from creator Lon Zimmet, is unsalvageably bad in its execution.

Outmatched is about blue-collar parents, Mike and Kay (Biggs and Lawson), who have been blessed/cursed with three geniuses for children, plus one regular dumb child who mispronounces words but delivers the moral lesson. Mike and Kay love their three genius children, but they are “outmatched” by their intellect. I genuinely like the idea of a fish-out-of-water premise where the parents are the fish, and here, there’s an occasional glimmer of cleverness (I like that Mike and Kay disappear into the basement to smoke pot and escape their competitive child prodigies, and Mike delivers one clever line, “I used guilt. It’s bullying, but from the heart”), but the humor leans heavily on broad stereotypes about nerdy kids.

It’s basically the family sitcom version of Big Bang Theory — Young Sheldon, but with siblings — complete with an obnoxious laugh track. Like Big Bang Theory, it’s designed to make people who do not value intelligence feel smarter about their choices, because it’s the pot-smoking parents — Mike is in construction, and Kay works in a casino — who are the relatable characters, while the smart kids are seen by both the parents and the audience as oddities. The parents teach the children lessons about valuing emotional connections over the pursuit of knowledge, and Biggs gets to deliver the sort of self-righteous line that every parent has ever delivered to their academically superior offspring: “For as smart as you guys are, you’re a bunch of dummies.” (My father’s version was, “For a college boy, Duuuuusty, you shore aren’t very bright.”) In the end, of course, it’s the non-genius kid who helps her smarter siblings navigate the parent-child relationship in the pilot episode, while Mike — who is both the dumb Dad and the dumb husband — sets a singing fish on fire.

I love Lawson, and she acquits herself well here, while Biggs has mastered the schlubby sitcom husband whose wife is way out of his league, but ultimately, Outmatched is just a collection of sitcom tropes remixed into a sort of bland King of Queens crossed with Big Bang Theory paste. It’s not good, but it’s the kind of bad sitcom that will either be quickly canceled or run for 11 seasons. 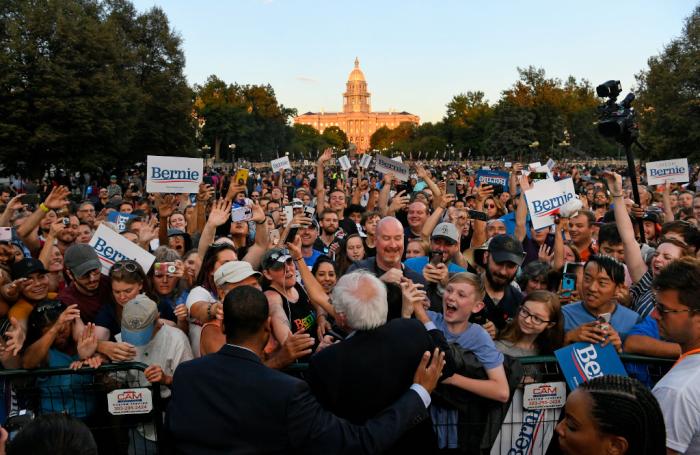 Only Bernie Can Win This Thing