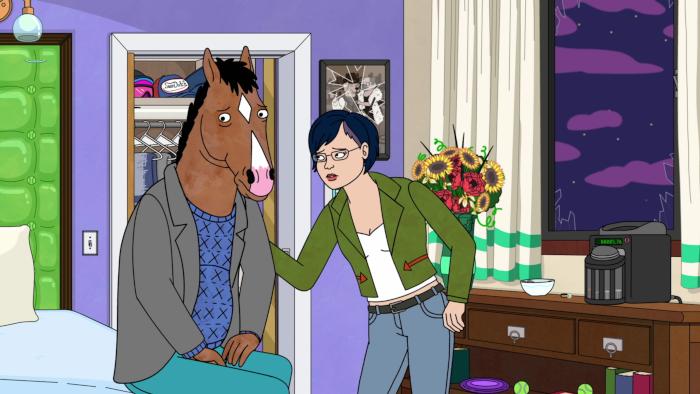 What do you do when you finally accept that you are a bad person? In the finale of the fifth season of Netflix’s BoJack Horseman, the eponymous has-been sitcom star, voiced by Will Arnett, somehow managed to fall to the next level below rock bottom, a new low point in his life so devastatingly sad that even he couldn’t dent it any more. The first handful of episodes of the final season, which dropped on Netflix last Friday, pick up from where we left BoJack: In rehab. For the first few weeks, he finds little solace and even fewer answers to his life in the endless cycle of therapy, yoga, and symbolism-laden mountain walks. It’s not until he’s ready to fully acknowledge his splintered past and the myriad mistakes he’s made that BoJack can do what he’s wanted to since the first season: Become a better person.

Whether or not he can become a good person is a whole other matter. One of the smartest and most emotionally piercing aspects of BoJack Horseman, the animated comedy that helped to build Netflix’s reputation, is its awareness of the trappings of ‘difficult men.’ The series has always played around with the now cliched beats of ‘prestige TV’, especially the troubled but charismatic anti-heroes who populate its most beloved programming. It’s a subgenre that’s reliant on the notion that if the narrative acknowledges these men to be bad people with a loveable streak, the story doesn’t have to do anything else to interrogate them. BoJack Horseman utterly rejected that last season with its own scathing parody of a bad man prestige series, but now it’s taken on an even trickier task in trying to show if true forgiveness and salvation can be found for a (horse)man who sincerely wants to try.

Of course, it’s never that easy, and these fleeting yet thematically dense episodes show that in an unforgivably harsh light. Remember, over the previous five seasons, we have seen BoJack skate by on his celebrity privilege as he descended deeper into alcoholism and drug addiction. He has hurt almost every person he’s encountered, however fleetingly, and left devastation in his path. The biggest tragedy of his life, it seems, is the decline of Sarah Lynn, his Horsin’ Around co-star who grew up to be a deeply troubled addict popstar and who died in what may be the show’s most heart-wrenching episode. Sarah Lynn’s shadow looms heavily over season six, particularly the realization that BoJack lied about being with her when she passed in the planetarium. The bastardized father-daughter relationship the pair had — part best friends, part enablers — haunts BoJack, especially as it is revealed that his treatment of her during the show’s production may have put her on a dark path.

The true genius of this season comes in one episode, where it is shown how the bad deeds of one person can cause a ripple effect throughout society. After being physically attacked by BoJack during one of his drug trips, actress Gina Cazador (voiced by Stephanie Beatriz) now lives with the trauma that makes doing her job increasingly difficult. Kelsey Jannings (Maria Bamford), the indie darling director who was fired from BoJack’s Secretariat movie, is now considered a ‘difficult woman’ who can’t get a major movie gig despite her skills. BoJack’s half-sister Hollyhock (Aparna Nancherla) still deals with anxiety and PTSD-like symptoms when around crowds and alcohol. If all BoJack has ever wanted is to be a good person and he’s now in a place to become such, can that ever truly happen if the rest of the world is still dealing with his mess?

While this season is mostly focused on The BoJack Problem, the old gang still have plenty to do (except for Todd, who the show has mostly accepted works best as a sidekick committed to exceedingly wacky adventures.) Princess Carolyn is struggling to balance life as a new mother to her adorable but prickly porcupine daughter with her commitment to her job and the insidious promise of being ‘a woman who has it all.’ In one detailed plate-spinning episode, we see the endless cycle of this labor made literal as the work mounts up and the levels of satisfaction sink to zero.

Diane, who has always been the show’s most fascinating figure aside from its protagonist, has a similar journey to her horseman friend. While she has never sunk to his depths, she too finds herself smothered by depression and the understanding that her old life holds little sway over her now. Currently working as a roving reporter for Girl Croosh, she’s found a lovely new boyfriend in the former of her cameraman Guy (voiced by Lakeith Stanfield). When Guy asks her to move to Chicago with him, she struggles with the decision. Can she take a risk on finding something happy in her life when everything else seems so sh*tty? Internet writers everywhere may find themselves cringing to the max at her own job evolution as Girl Croosh pivots to video (ugh) before being acquired by an almighty media monopoly that wants to severely limit its reporting in the name of corporate interest (UGH!)

Mr. Peanutbutter finally has to deal with the fallout of his d-bag behavior after cheating on his very young fiancé Pickles with Diane. He’s a terminally delighted figure whose blindingly sunny disposition blinds him to the ways his behaviour hurts those around him, especially his slate of increasingly younger wives who are initially dazzled by his positivity. Pickles, who can’t be any older than 25, seems perfect to fit this role since neither dogs seem self-aware enough to know that their marriage is doomed for all the reasons it seems perfect to them. Yet even she can’t burden the weight of his mistakes. The episode where they finally have a real adult relationship fight as surprise party guests try to escape their home has some of the best sight gags in the season.

As the show has evolved, BoJack Horseman has gone from being a comedy with serious moments to a brutal drama with great jokes, and this season has some amazing ones. The backgrounds are still loaded with detail that’ll make you repeatedly hit pause. This is a rare show that has always found a way to balance the meditative with the hilarious without losing the potency of either element.

It’s a shame that the makers of BoJack Horseman won’t get the end the show on their own terms (Aaron Paul admitted on Twitter that Netflix called time before they were ready), but the first half of the final season shows them getting ready to conclude a tough but necessary story. There are glimmers of hope amid the blackness, like the recurring image of the starry skies that seem to haunt BoJack, but this is a series too concerned with the truth to let its bad man off that easy.

Season six part one of BoJack Horseman is available to stream now, and part two will premiere on January 31, 2020.

← 'Maleficent: Mistress of Evil' and 'Modern Love' Share a Whitewashed Idea of Love | Review: Don't Dismiss HBO's 'Mrs. Fletcher' Until You Know What It's About →