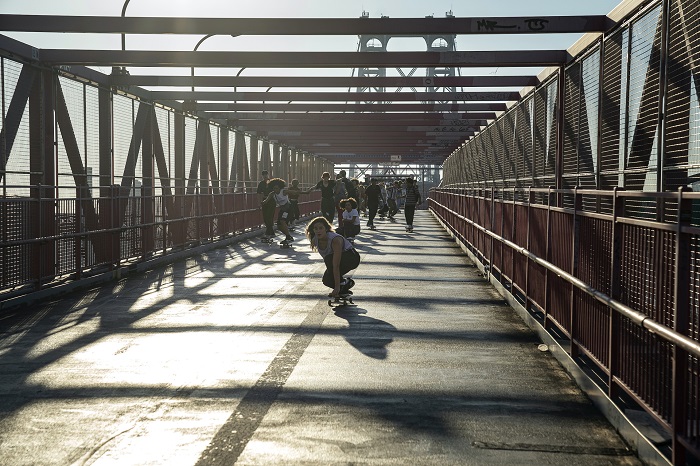 Crystal Moselle’s Skate Kitchen, about a group of female skateboarders struggling to find their own space in the heavily male-dominated New York City scene, was one of my favorite movies of 2018. In my review, I wrote:

To return to that in world in Moselle’s Skate Kitchen spinoff Betty, the first season of which wrapped on HBO on Friday, June 5, is an experience of profound joy. Moselle, who directed all six episodes, tweaks the Skate Kitchen story for this format. Certain character introductions are redone, relationships reframed, and character names changed; although the series reuses actors from the film, some of them go by different monikers. There is no role for Jaden Smith here; he was the biggest name of the Skate Kitchen cast, which was otherwise made up of first-time actors. But Smith’s absence isn’t necessarily felt because the nearly all-female writers’ room for Betty expands the show’s focus so precisely and intentionally.

The female skaters’ desire for respect is still front and center here, but each episode allows for further individual character development, for more detailed friendship dynamics, and for a greater exploration of the New York City around them. Most of Skate Kitchen was about the frictions between men and women running in the same super-small circles; Betty does more with the concept, elevating the discussions to ones about prejudice in the fashion industry, sexual abuse and questions of consent, and racial profiling and police harassment. Betty feels timely and urgent but simultaneously, per Moselle’s style, dreamy and whimsical. There’s a hard edge to these young women and a defiance to how they operate, but that fierceness guards not fragility, but tenderness. They care about each other, and their friendships are the most important things in their lives. 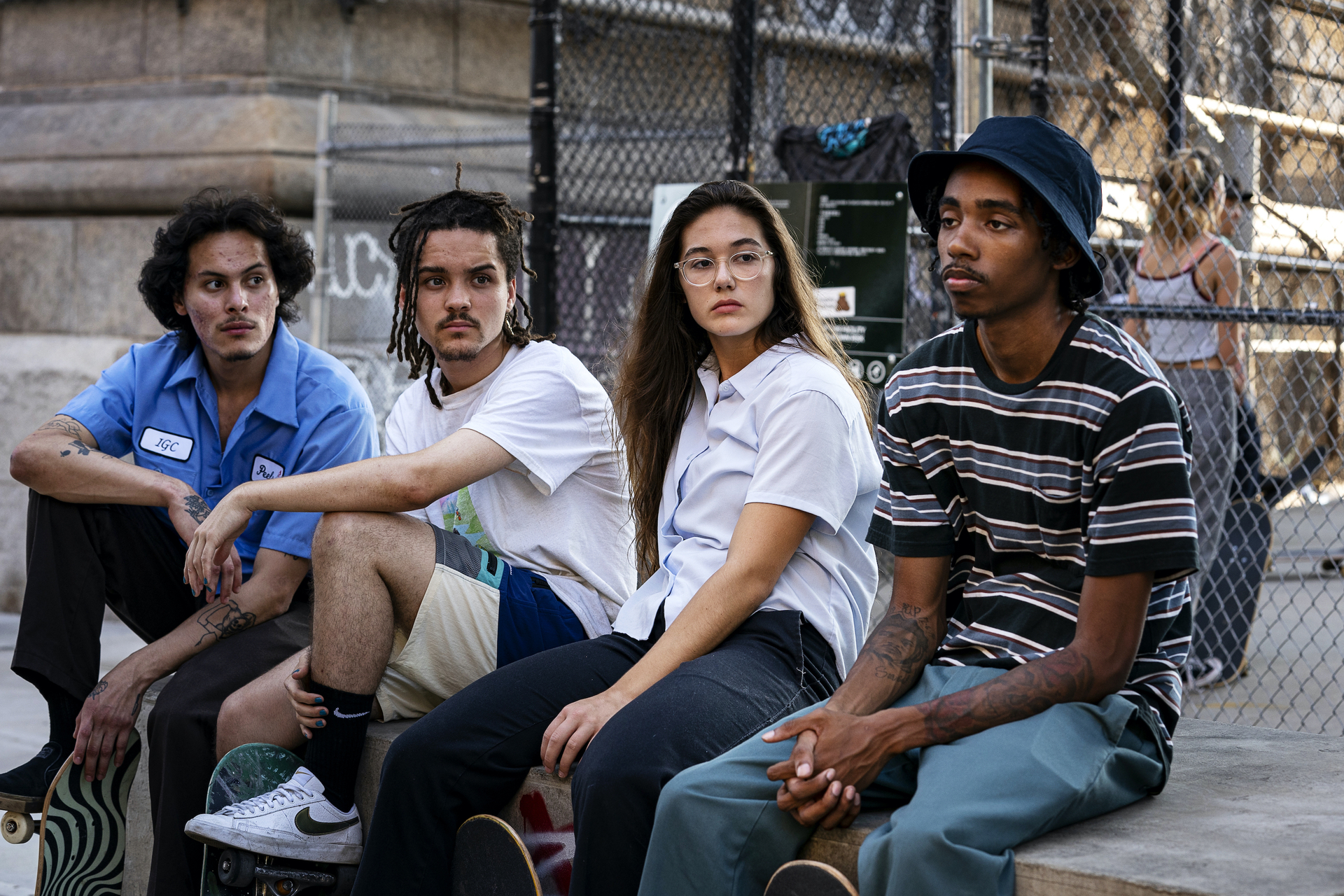 “Key Party,” the season’s first episode, does an efficient job laying out a variety of story threads that will sprawl forward throughout the season. Best friends Kirt (Nina Moran), Janay (Dede Lovelace), and Honeybear (Kabrina Adams) are mainstays at the local skate park, but their planned all-girl skate session fails to gather much attention. They have their own Instagram accounts on which they post content, but they’re mostly ignored by the male skaters, whom they know but aren’t particularly close to. In the first retcon from Skate Kitchen, the friends’ first interaction with Camille (Rachelle Vinberg), a female skater who nearly exclusively skates with guys, doesn’t go very well. She blows off their sesh; “Sorry, I guess I don’t follow you,” she says, and later on, we see Camille, Philip (Raekwon Haynes), Luis (C.J. Ortiz), and a few other male skaters laughing at the girls’ skating.

But an unexpected afternoon thunderstorm is a great equalizer, emptying out the skate park as the skaters scramble to find plastic bags to cover their boards. And when Camille realizes that she left Philip’s backpack behind at the park—with their wallets and her phone inside—the only people who will help her are Janay, Kirt, and Honeybear. As Janay and Camille chase her phone throughout the city, spending the day joking around and becoming more familiar with each other, Kirt and Honeybear meet up with their friendly neighborhood weed dealer and knockoff-fashion seller Farouk (Reza Nader, a true series highlight) and his associate Indigo (Ajani Russell). By the end of the episode, Indigo has agreed to learn how to skateboard from Kirt, Farouk has been established as a benevolent and eccentric figure on the outskirts of their group (“Damn, we’re like Dora and the Explorers, dude!” he exclaims when they find the backpack thief), and Camille insults the girls once again by abandoning them to rejoin the guys after they’ve helped her find the missing backpack. “Damn, that bitch is cold!” Kirt exclaims, and the tension between Camille and the other girls provides a frame to the rest of the season. 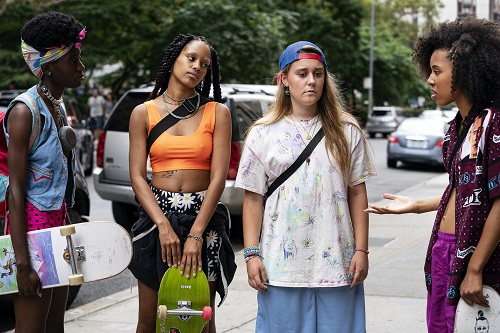 One of the greatest strengths of Betty is how it allows its characters to shift and transform over time, showing different parts of themselves to different people, providing us as viewers with a deeper understanding of what they care about, what they’re hiding, what they worry about, what they love. Through Camille, we see how certain pockets of the skateboarding community prioritize clips, Instagram views, and building a level of notoriety through their skill; her rejection of Janay, Kirt, and Honeybear isn’t excusable, but we grasp the tenuous place she inhabits as a really good female skater who still, in the eyes of some of her male peers, is lesser-than because of her gender. Honeybear and Indigo, both so striking in their personal style and instantly recognizable members of the girl crew, are expanded here from their roles in Skate Kitchen, and their lives thoughtfully explored—Honeybear’s sexuality, Indigo’s friction with her wealthy mother. Over the course of the season, Janay becomes embroiled in a Me Too-type accusation that threatens to derail her relationship with her ex-boyfriend Donald (Caleb Eberhardt, of Black Christmas), with whom she produces videos lamenting the increasing gentrification of their neighborhood.

And even Kirt, who so often serves as the series’s levity (the premiere of Betty begins with Kirt’s ass exposed, purple and yellow from a gnarly skating bruise, so that she can take a selfie of it on an NYC sidewalk) is given time to be more than just the girls’ Jason Mewes analogue. Her constant joking about her lesbianism is amusing and her lack of fear when stepping up against guys mocking her friends is admirable, but Kirt has massive blind spots about what her three closest female friends—all Black—must shoulder that she does not as a white woman.

It’s a credit to Betty that the show is able to distill the weightiness of these topics down onto the level of individual lived experience, tracking sometimes within a single episode but mostly over the course of the entire season the important role female friendships play in processing the world around us. “I wanna stop fighting the patriarchy and start helping the matriarchy instead,” Kirt declares, and some of the series’ strongest moments do just that.

Add onto that all the other stuff Betty does well, and the series transcends whatever genre limitations you could place on it. It’s funniest when the episodes place the young women in situations that tap into their outsider status while also underlining how the girls value the world around them; Janay’s insistence that “Basic bitches might skate too, you don’t know,” when Honeybear is shocked she hands out girls’ skate sesh fliers to a pair of white women with yoga mats is a legitimate LOL moment. Like she did with Skate Kitchen, Moselle makes sure to capture the fluid beauty and full-body athleticism required for skateboarding; she holds the camera on the girls when they skate, making clear to us their agility, fearlessness, and work ethic.

The vibrant multiculturalism of New York City is on full display in how effectively Betty builds a lived-in world for these young women, from their neighborhood bodega to the bubble-tea shop to Farouk’s van on the street corner outside of their skate park. This is a girl-power story, sure, but Betty doesn’t pay that concept lip service and then move on. Consider the title “Betty” itself, a poser-adjacent insult spewed at female skateboarders by dismissive men, a term often lobbed at Janay, Kirt, Honeybear, Indigo, and Camille, and one they reject completely. Moselle wants to confront stereotypes and unapologetically undercut them in Betty, and she does so in a series that with resonance, humor, energy, and poignancy invites us alongside a group of girls bonding ever closer to each other while transforming the subculture that can’t quite contain them.

Betty aired on HBO from May 1 to June 5, 2020, and its six-episode first season can be found on HBO On Demand, HBO Go, HBO Now, and HBO Max.

← J.K. Rowling Has Made Herself Completely Irrelevant and She Only Has Herself to Blame | This is 10-Year-Old Nandi Bushell Playing Rage Against The Machine →