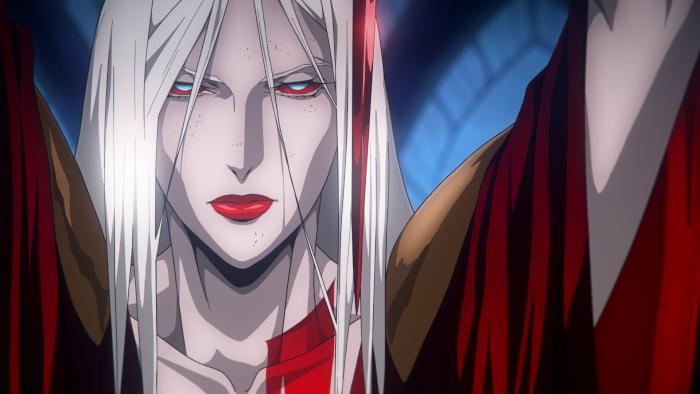 How old am I? I’m so old that my childhood home didn’t get more than 3 channels until I reached college. I’m so old my dad taught me to drive in a battered Jeep that didn’t have seatbelts or thirty percent of its floor when I was ten and it wasn’t a big deal. And I’m so old that at the tender age of eight years old I played the very first Castlevania game as the gods intended; on a classic NES console hooked up to my 13” color television that only worked on channel 3, sweating my ass off all summer long in a second-floor bedroom that had never known the crisp joy of air conditioning.

Thirty-four (34!!!) years and almost forty games later, Netflix has blessed us with the fourth and final season of Castlevania, a graphically violent homage to the series. Written by the contemptible Warren Ellis, who almost a year ago was accused of sexual misconduct by one hundred women, this season goes light on the plot in favor of frenetic action and gore. This isn’t necessarily a bad thing; there are only so many ways to explore the terrible things vampires and humans do to other humans before the point is hammered home. We’re here to see the monsters get their comeuppance and they surely do, but only after five hours of bloody swordplay and magic. If I had to describe what happens in a single word, it would be “SPLORT.”

When we last left our intrepid heroes, Sypha the Traveler and her lover Trevor “That’s a Terrible Name” Belmont had departed the town of Lindenfeld after burning down the Judge’s home in reaction to finding his secret room filled with the shoes of dead children. I know, right? You think you know a guy. Meanwhile, Alucard the vampire mopes about after murdering his Japanese exchange student lovers Taka and Sumi and staking their bodies by the front gate as a warning to future bang buddies. Saint Germain is somewhere in the Infinite Corridor, searching for his long-lost love who never gets any backstory. Whiny and easily manipulated Forgemaster Hector has been magically enslaved by Lenore, while his more focused counterpart Isaac seeks power and revenge for Hector’s betrayal. Vampire lovers Morana and Striga — the only characters with any sort of emotional arc apart from our protagonists — are off conquering Eastern Europe for Carmilla, who has only begun to reveal her plans. 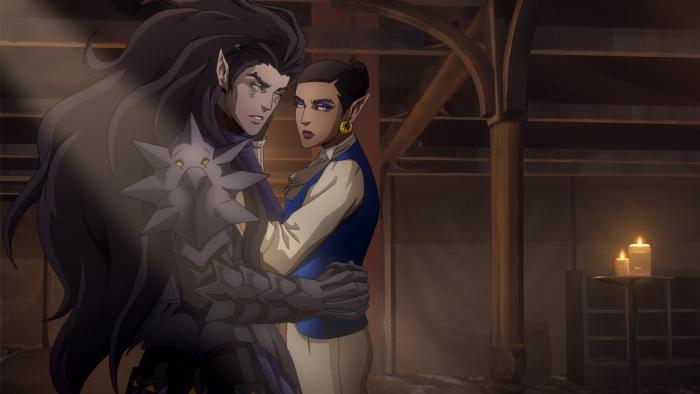 There’s a lot going on there. And the first episode of the latest season decides to ignore all of that in favor of 24 minutes of graphic violence. Trevor and Sypha are fighting an endless parade of would-be necromancers desperate to resurrect Dracula for a variety of motives. Alucard is slowly going mad in his solitude, though to be fair it’s difficult to tell the difference. Insanity is the theme for this final season in much the way betrayal was for season 3. Carmilla’s lust for power drives her ambition to mad heights. We meet Zamfir, a noble-born warrior desperate to save Târgoviște’s Underground Court while ignoring the plight of the city’s few remaining citizens in her own growing lunacy. And Saint Germain willingly steps ever further into his own corruption as he makes terrible decisions to save his lady love. 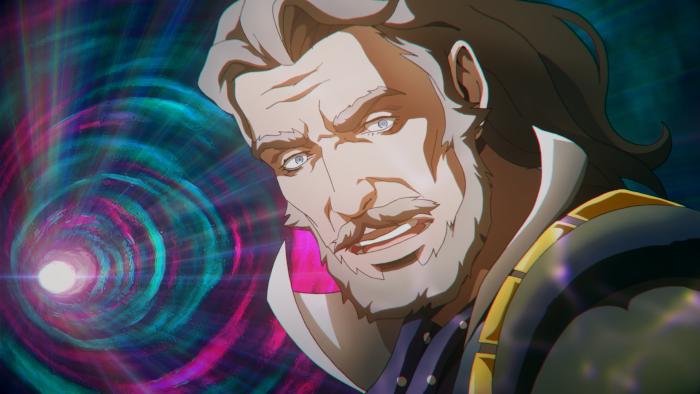 But that’s all window dressing for the action as Isaac invades Styria, night creatures invade Târgoviște’s underground sanctuary, and vampires invade Dracula’s castle. Blood, viscera, and appendages fly what seems like every few minutes, though it’s not until the penultimate episode when Belmont, Sypha, and Alucard finally rejoin forces that things truly shine. The animation and direction nail the superb teamwork utilized by our three heroes in a way reminiscent of Netflix’s own The Old Guard, where Andy and her merry band of paladins work together in unconscious unison so complete that violence becomes a thing of beauty. Honestly, the animation and art direction are gorgeous all the way through, particularly during the final act and Carmilla’s climax. The voice work remains solid if somewhat subdued, with Richard Armitage and Alejandra Reynoso leading the rest of a talented pack.

There are rumors of a spin-off now that Castlevania is complete, presumably without Ellis and his super creepy grooming and sexual manipulation of fans. If rumors are true, it’ll involve entirely new protagonists, and I for one am up for it. Castlevania staked out new territory for Netflix in terms of adult animation, and though it lacked the complexity and emotional impact of Amazon’s Invincible, it was still a wild ride and a great way to turn off your brain for a few hours. All of season 4 is currently available on Netflix.