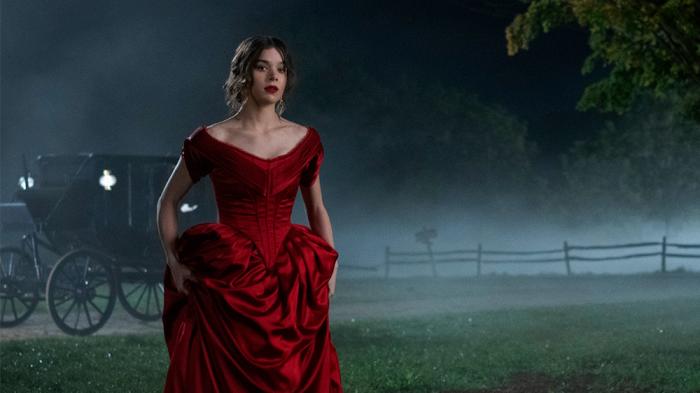 Generations of schoolchildren were taught to think of American poet Emily Dickinson as a stern and lonely recluse, whose thousands of poems were written for her private pleasure not publication. But that was a narrative peddled by an opportunistic and homophobic acquaintance who rewrote the poet’s personality and literally erased her queer identity to make her daring work more accessible to the stodgy folk in 19th century Massachusetts. That story was explored earlier this year in the absolutely sensational and hilarious biopic Wild Nights With Emily. Now, the wild nights of Emily Dickinson’s youth are being explored in the willfully rebellious Apple TV + sitcom Dickinson, which depicts its headstrong heroine as an imaginative, lusty, and patriarchy-defying rebel.

Dickinson stars Hailee Steinfeld stars as Emily, who lives with her wealthy parents, dashing brother Austin (Adrian Enscoe), and daffy sister Lavinia (Anna Baryshnikov) in a lovely home in Amherst, MA. All in the family know Emily is clever, maybe even a genius, but her ambitions to become a great writer are not taken seriously. Her father (Toby Huss) scolds her on the “proper” place of women, refusing to let her attend academic lectures much less have her work published. Her mother (30 Rock’s Jane Krakowski) is dedicated to training Emily and Lavinia to be perfect housewives so they might snag suitable husbands. Emily thinks chores like fetching water, scrubbing up, and baking bread, are a waste of time she could spend thinking. Besides, Emily has no desire for a husband.

Apple TV+ made the first three episodes of Season One available to critics. In the first, “Because I could not stop,” we meet the three loves of Emily’s life. The first is her writing, which she scribbles on scraps of paper and muses over throughout her day. Alongside Steinfeld’s face, scrunched in concentration, Dickinson’s famous words fade in and float as she ponders the poem’s creation.

Each episode ends with her penning a poem. This takes us to her second love, as hinted by the ep’s title, Death. A first wave Goth Girl, Dickinson was fascinated by death, which the show explores in macabre one-liners, like Emily quipping her funeral will surpass the one they’ve just attended, or her rejecting a suitor by saying Death is the only man for her. But at the end of the ep, the ride spoken of in this classic poem comes to life. A carriage pulls up to the Dickinson home. Emily, dressed finely in a garishly red satin gown and matching red lip, rushed to meet it. Inside, is Death played by a top hat-sporting pot-smoking Whiz Khalifa, who councils her to find immortality by breaking the rules that would bind her.

This takes us to her third love and her greatest muse, Sue. Played by Anna and the Apocalypse’s Ella Hunt, Sue Gilbert is introduced as Austin’s newly minted fiancée, news that infuriates Emily. And we soon learn why in a private conversation where the two childhood friends argue over the engagement. Her eyes aflame, Emily demands, “Promise me you’ll always love me more than him.” And they kiss. Over the course of the next three episodes, we’ll see this secret love blossom beneath the oblivious nose of her clueless family, who gleefully embrace their new daughter. So too will we see Emily struggle with the cruel reality that their love can only ever be secret.

Dickinson aims to re-adjust audience perception of its eponymous poet by reveling in the romance and rebellions that shaped her life and work. The way it goes about it may jar some viewers, as creator Alena Smith favors willful anachronisms in dialogue and music to bring a modern verve to this 19th-century rebel. Emily and her peers say things like, “We hang out, like, all the time,” “sexy as hell,” “just chillin’” and “let’s get the party commenced!” Non-diegetic music of smirking girl-rock plays over Emily as she writes. Hip hop blares over a make-over montage where she and Sue crossdress as men, and again when their peers cut loose at a house party fueled on opium. In this way, Dickinson connects the life of its teen protagonist to a tradition of coming-of-age series and movies, from My So-Called Life and The OC to Mean Girls or Steinfeld’s own Edge of Seventeen.

This clash of cultures might seem pandering to some, as if teenagers couldn’t possibly relate unless you looped in current slang and cool tracks. Despite the clunkiness of this collision, I found it charming. Smith’s anachronistic approach begs us to think of Dickinson outside of the black-and-white photo and the dusty narrative that strip away her color and liveliness. Steinfeld brings a spirit and unapologetic sexuality to the role. The actress/singer, who has explored sexual awakenings in her movies and music, offers a look into the lust of Dickinson in longing looks, heated kisses, and wild nights of Sapphic exploration. Then, Dickinson’s imagination is explored through fantastical bits like the carriage ride with Death and a drug-fueled trip that has her dancing with a giant talking bee, voiced by Jason Mantzoukas.

Not all of its enthusiastic flourishes work. The dialogue sometimes feels a bit “How do you do, fellow kids” in its earnestness for slang. Likewise, its comedy often feels clumsy, with mugging and mean girls making cheap punchlines. However, Baryshnikov as Lavinia is proving an early standout here, turning the awkward younger sister’s overeager attempts at flirting into comedy that is hilarious and relatably cringe-worthy. You may never have told a crush you made a pillow for your cat, but who among us hasn’t confessed something just as uncool in a moment of “please like me” panic?

Where Dickinson works best is in its fantasy, romance, and downright weirdness. I don’t know WHY Emily hallucinates a bee, but it’s a demented delight to behold. With other curious cameos already announced, like John Mulaney as Henry David Thoreau, there’s the promise of more quirky fun to come. Yet at its core, it’s the romance between Emily and Sue that will keep me coming back to Dickinson. Sure, I know the story (Thanks Wild Nights With Emily!), but Steinfeld and Hunt have a sizzling chemistry that seems like it could make up for many, many teen-drama romances that treated LGBTQA+ kids as tragedy props, queer-baiting, or “very special episode” fodder. They are not side characters or girls going gay for sweeps week. They are the leads in this story, which is unrepentantly a love story. With fresh music, frolicking humor, bizarre flares, and a deep desire to reveal the heart of Emily Dickinson, Dickinson is a show that’s easy to fall for.