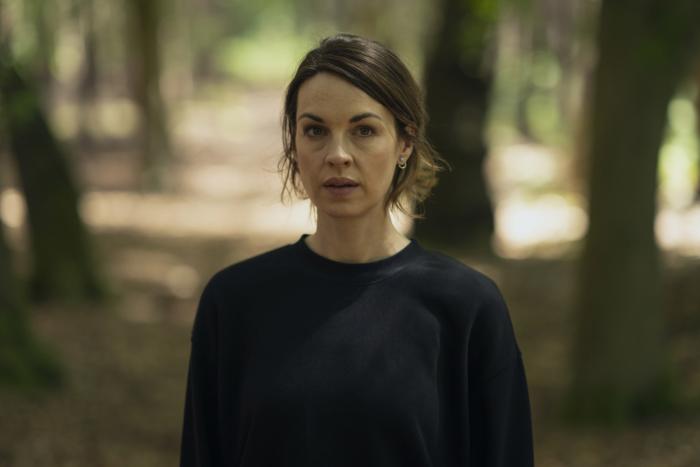 Prime Video’s The Devil’s Hour stars Jessica Raine (Call the Midwife, Wolf Hall) and Peter Capaldi (The Thick of It, Doctor Who) and that alone probably makes the six-episode series worth a look. Capaldi is terrific as the scene-stealing villain, but it’s Raine who carries the series, and though she’s been around for over a decade (and I saw her most recently in Becoming Elizabeth), this is the first time I’ve really taken notice. She is captivating in this, blending just enough humor into an otherwise darkly dramatic role to make The Devil’s Hour crackle with energy.

The series is part detective show, part sci-fi, and part thriller, and centers on Lucy Chambers (Raine), the single mother of Isaac (Benjamin Chivers). Isaac is troubled. He’s a husk of a child. He’s not neurodivergent. He has no mental problems. It’s just that, emotionally, the kid doesn’t work, so much so that Lucy’s husband, Mike (Phil Dunster, aka Ted Lasso’s Jamie Tartt) left because he couldn’t deal with the creepy-ass kid who can recognize emotions in others, but cannot express them himself.

Meanwhile, Lucy — who works in child services — wakes up every morning at exactly 3:33 a.m. She’s an insomniac who often experiences something akin to déjà vu, only she doesn’t have glimpses of the past, but of the immediate future. She does not, however, understand what the visions are, but they nevertheless allow her to protect a client from an abusive boyfriend and a teenage drug dealer from his supplier.

One day, Lucy’s son is abducted. Lucy and her visions ultimately partner with DI Ravi Dhillon (the very handsome Nikesh Patel from Starstruck) to locate and rescue her son from a man named Gideon (Capaldi), although Gideon’s reasons for taking the kid are complicated and not altogether sinister. That search puts Lucy and Dhillion on the trail of a decades-old murder case that also eventually connects to Gideon. The series’ framing device is Lucy and Dhillon’s interrogation of Gideon, who connects all the dots.

Plot-wise, it’s occasionally suspect as one might expect from a series exec-produced by Stephen Moffat (though, it was created by Tom Moran), but the story makes enough sense that it’s easy to overlook its flaws in favor of Raine’s stunning performance. The character appears to owe a small debt to Fleabag and the work of Sharon Horgan — Lucy is something akin to a muted Phoebe Waller-Bridge crossed with Ellie Kemper — but it’s interesting to see that sort of character mired in an otherwise dreary detective series. In fact, it’s considerably less dreary because of her, while her estranged husband makes for a terrific asshole, as he is in Lasso, only here he’s assholing it up in service of a drama.

The logic is not always sound, but I nevertheless found A Devil’s Hour to be strangely riveting, from Raine’s performance to the creepy kid, to the chemistry between Lucy and Ravi, and the way that Capaldi — in full Capaldi-mode — wraps it all up in the final episode before the series drops an ending that might leave viewers split. I liked it, but some viewers may feel frustrated after investing six hours into a series only to get an ending straight out of the Twilight Zone or an otherwise grounded Stephen King novel that has to rely on otherworldly elements to resolve the story. It’s fun, even if it isn’t fully logical.

The Ending, Explained: Capaldi’s character Gideon, like Lucy, also has visions of the future that feel like déjà vu. It’s because Gideon has lived the same life thousands of times. He can see an event happen, kill himself, relive the moment and prevent the event from happening. Gideon has basically devoted his entire life to preventing the unjust deaths of others. Lucy gets caught up in one of Gideon’s time loops because, as a child, Gideon prevented Lucy’s mother from killing herself. Lucy’s déjà vu is merely glimpses of the lives she has lived in all of Gideon’s realities, including one reality in which she marries Ravi.

However, Lucy’s existing reality — the one we watch in The Devil’s Hour — is not, in fact, Gideon’s final reality. In Lucy’s final reality, the creepy kid, Isaac, doesn’t exist, which is why he’s a husk of a child. In the final reality, Lucy is a detective. She does not marry Mike. She does not have Isaac. Isaac’s existence is an aberration, a mistake, one that Gideon — after he frees himself from the interrogation room — corrects, which sets Lucy on a different but related path.

If it sounds convoluted, it’s because it is, but creator Tom Moran makes it make sense, at least enough so that the characters and performances can allow viewers to overlook the inconsistencies.


← 'Tár' and the Language of Prestige | With One Week Until Election Day, the Political Climate Is Dicey →
Header Image Source: Prime Video
Most Viewed