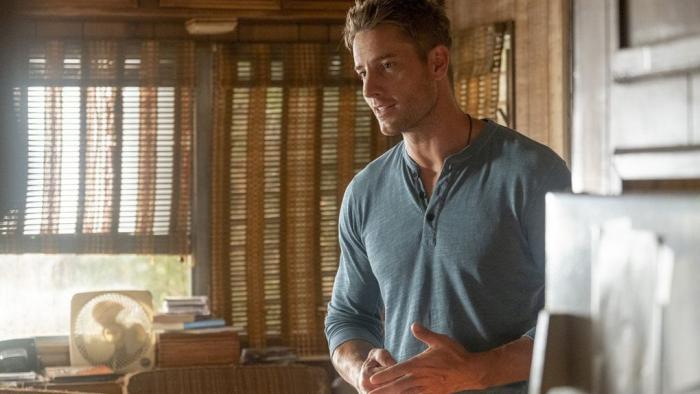 Recap: 'This Is Us' Is Adamant About Making Us Like Kevin

No offense to Justin Hartley, but Kevin has always been something of the weak link on This Is Us, a character either too obsessed with his career or with his love life, or sometimes with both. He’s the Pearson f*ck-up, and it’s a role he’s played well for three seasons, walking off the set of his sitcom; reconciling with his ex-wife only to blow that, too; getting addicted to pain pills and alcohol; and spending half a season trying to chase down his long-believed-dead uncle Nicky.

In recovery now, Kevin Pearson has become something of a new person. His worldview extends beyond himself. He’s not trying to get into anyone’s pants, and he has shown up for Nicky, determined to keep both himself and his uncle sober. In this week’s episode, Kevin takes a step even further: He wants to help Cassidy (Jennifer Morrison) maintain her sobriety and … he’s not trying to sleep with her. In fact, he is trying to help her reconcile with her husband, who wants to divorce Cassidy because a combination of PTSD and alcoholism has made her a danger to her son. I like this Kevin. He is warm and caring, self-deprecating and funny, as he walks around small-town Pennysylvania with Cassidy, takes selfies with fans, and recounts shooting the pilot for The Manny after learning earlier in the day of the show’s cancellation, eight years after its premiere. He recalls a moment at the end of the pilot in which he connects with a crying baby, which transforms his “stupid character on this stupid show into a real person.” This Kevin is more confident and self-assured, without being cocky, and he and Cassidy have great chemistry together. I almost hope that it remains platonic.

Meanwhile, Beth opens up her dance studio and her (judgemental) Mom, Carol (Phylicia Rashad), is in town to help, which proves concerning when a family of dead possums is discovered inside the new building. The smell is overpowering, and while Carol insists they cancel the opening event, Randall stands up to her, determined to make it work. He moves it outside, and that hustle ultimately gains the respect of Beth’s mom, who had been skeptical of Randall dating back to Randall and Beth’s courtship during college. “When I met you, I didn’t see the strong father and man that you would become,” Carol tells Randall. That’s a lesson that Randall needs to keep in mind after meeting Déjà’s teenage boyfriend, Malik, who has a child of his own.

We are also witness to the moment when Randall finally wins Beth’s affection in college. During a lunch with their parents after Randall and Beth’s first disastrous date, Randall gives Beth a lemon, because he’d remembered she’d ordered lemon with her Coke on their date. That’s the kind of attention to detail that wins Beth and earns Randall his first kiss from Beth that night in his dorm.

During that same time period, after Rebecca has lunch with Beth’s mom and sees how well she is doing a year after the death of her husband, Rebecca decides its time to get on with her life, as well. She decides to move out of the condo and find a “home,” a plan that Kate — who had decided against attending college — can get on board with on the same day in which she herself secured a job in a record store (that’s a job with a solid future!). However, just as Kate and Rebecca finally enjoy a moment of serenity and begin looking toward a future without Jack, Rebecca gets a call from 19-year-old Kevin, who is out in Los Angeles pursuing an acting career. “I had an audition last week, oh, and I got married. Her name is Sophie. Can you send me some money?”

We knew that Kevin and Sophie were married, but we did not know that Kevin had married her so young. He is an impulsive guy, however, as we learn in the present when — after Nicky declines to allow Kevin to buy him a new trailer — Kevin buys himself a trailer with his “Hollywood douchebag money” and parks it next door to Uncle Nicky. Kevin really is committed to helping Nicky.

Elsewhere, Kate and Toby continue to learn to care for their blind infant by taking their baby Jack to the beach, where he can feel the water on his feet. Good story, Kate and Toby. 👍

← Review: 'Greener Grass' Feels Like 'PEN15's Older, Weirder Sister, And We're Into It | A Brief Investigation Into Why Jared Leto's Joker Was So Terrible →