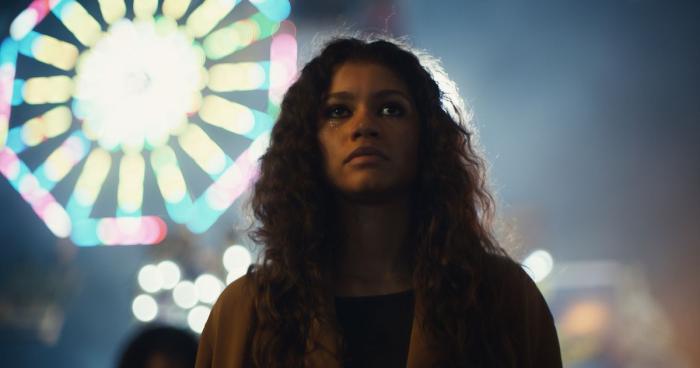 In the 'Euphoria' Season Finale, the Focus Turns to the Parents

We’ve been wrestling with who HBO’s often overly edgy Euphoria is targetted toward the entire season long. In its emotionally powerful season finale, in some ways, it feels strangely pointed as parents, the influence they have on their kids but also the helplessness and the complete lack of control they possess once their children reach a certain age.

“Here’s the toughest part,” Rue’s mom says in a letter she reads aloud in her daughter’s Narcotics Anonymous group. “No matter what you do, or say, or wish, the decision will be all hers. And all you can do is hope she gives herself the chance she deserves.”

We see in Nate and the self-harming tantrum he throws after a fight with his father the influence of his Dad’s violence and misogyny, and how Nate has not only internalized it but sometimes seems to want to fight against it. The episode takes place primarily at prom, but we are provided flashbacks to the last few weeks of the characters’ lives. In Nate, we see the emotional toll the past few months has taken on him when he can’t get it up for Maddy, who wonders aloud if Nate is also attracted to men. Nate lashes out at the suggestion and abuses her again. Maddy seemingly decides to break it off with him, but not before taking a flash drive containing a video of Nate’s father having sex with Jules. While Nate is in the shower, Nate’s father tells Maddy — as she’s walking out — that she and his son aren’t good for each other, that they bring out the worst in one another, and that she should cut him loose (he’s not wrong). When he confronts his son, however, a fight ensues, and even after Nate’s father pins him down, Nate continues to bang his head and thrash. Nate’s father can only walk away to his room, shut the door behind him, and listen, helpless to intervene — it’s too late. Nate’s father has put his son on an unhealthy path of abuse and misogyny.

Nate continues to pick at that thread in the present at prom, bringing a date he basically mauls on the dance floor in an effort to make Maddy jealous. It works. She can’t let him go, even knowing the danger he poses. “I really f**king hate you. You are abusive, psychopathic, and most of the time I really hate the way you make me feel. We shouldn’t be together,” she tells him, as she dances and hugs him on the dance floor. “I know,” Nate says, which at least suggests he’s self-aware enough to know how awful a human being he is. Their relationship is sadly still a work in progress as the season ends, and there’s no indication that the two have parted ways, even understanding how toxic their relationship is.

Cassie attends the prom stag — there’s no sign of McKay in the episode. In her flashbacks, we see her mom take her to get an abortion. The nurse asks her if there’s any family history of addiction, and Cassie tells her that her Mom is addicted to alcohol, and her father has a dependency to painkillers and heroin. Her parents addictions have manifested themselves in unhealthy relationships for Cassie, but her mother at least is able to pull herself together enough to be there for her daughter when it’s needed. During the procedure, Cassie daydreams; she goes to her happy place — ice skating — but it is yet another reminder of what her father’s addiction cost her.

Kat, at least, gets a satisfying end to the season. Her mother is supportive of Kat’s dominatrix-inspired prom dress, which is part of the reason why I think Kat — who has dropped the sexual bluster — is able to approach Ethan at the prom and admit she felt jealous after Ethan flirted with someone else. Her mother accepts Kat for who she is, no matter who that might be. In turn, with Ethan, Kat allows herself to be vulnerable for the first time in a long while. Ethan is adorable. “Is one of us going to get hurt?” He says. “Yeah. Probably. But I’ll do my best to make sure that it’s me.”

Fez, meanwhile: Oh Fez. His parents — in their absence (for whatever reason) — have had a profound effect on his life, too. He and his 11-year-old brother have been left to take care of their grandmother, which means not only being the adults but making adult decisions. Here, Fez flushed down his drugs after Nate called the cops on him, and he has to resort to robbing a dirty doctor to pay his dealer back. Fez’s fate has also been left undecided: Will his dealer let him go after he settled up? Or kill him for stealing from the doctor?

Finally, there’s Rue and Jules. At prom, Jules finally confesses that she’s in love with Rue, although she’s also in love with Anne, the girl back in her hometown that she hooked up with last week. After confronting Nate Jacobs — who basically tells Rue that she’s worthless — Rue asks Jules if they can run away together. Jules is like, “F**k yes!” but as they get closer to leaving, Rue has misgivings. I think what Nate told her sets in, and she begins to believe that she’s not good enough for Jules. She can’t bring herself to get on the train with Jules, and so she goes home crying before snorting a line of coke and entering into a dream-dance sequence set to the show’s theme song, Labrinth’s “All for Us,” which is probably a sign that Rue is either unconscious or dead. The latter seems unlikely — Zendaya is the star of a show that’s been renewed for a second season. Rue has, however, relapsed after three months of sobriety, which essentially puts her right back where she began the season.

“And all you can do is hope she gives herself the chance she deserves.” For Rue’s mother, who has done everything she can to support her daughter, hope is really all she can offer. Unfortunately for Rue, the addiction and the toll her father’s death has taken on her emotionally has left her incapable of giving herself that chance.

← Bill Maher Agrees with Marianne Williamson on Everything | 5 Shows After Dark: 'The Kleptocrats' on Starz, 'Divorce' Third Season Finale on HBO →