Recap: Rhea, Shiv, and Logan Are Playing a Game of Double-Crossing Musical Chairs in ‘Return’ as ‘Succession’ Travels Across the Pond

We’re reaching the end of this second season of Succession, and as Gerri tells Logan, “It might be time to start getting worried.” What the hell is going to happen to Waystar Royco? 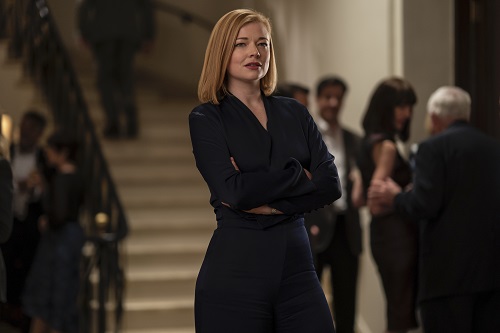 The Pierce deal failed. Sandy and Stewy are still going hard in the paint, now putting out ads directly attacking the company and encouraging doubt in the shareholders. They want the shareholders to demand a successor, because they know that’s a Roy family weak spot, and they’ll keep poking at it. Tom is getting increasingly caught up in the internal investigation looking into Lester’s behavior and the pattern of sexual abuse and violence going on in the cruise division he used to lead—and he’s looking really inept, by the way. That weak “I need lunch!” and then “I need to pee!” excuse when he was questioned by the investigators about document destruction? You couldn’t look more guilty if you tried! And who is Rhea amid all this? Now she’s helping Logan fuck over Shiv? Who the hell is Rhea Jarrell?

“Like, do you think they’re fucking?” Kendall wonders, and to be honest, the Rhea and Logan relationship is weird. He values her professional opinion, but she WAS just the CEO of one of his main competitors! Is there a history we don’t know? Or is there something far more cynical here, a suggestion that ideology doesn’t matter one bit as long as you’re making as much money as you can? Because Rhea, just a few days ago, was singing the praises of Nan Pierce, and now she’s out here helping Logan Roy double-cross his own daughter out of the inheritance he had previously promised her. I guess what’s in it for her is a future with Waystar Royco, but is she so self-inflated that she thinks her leadership would turn this all around? Can a hummingbird change a rhino? (Ahem, and again … did she actually spend the night? I am so confused by this dynamic!)

Aside from Rhea, we know what everyone else wants in this episode. Tom is rabid about figuring out what Greg knows and what documents he’s kept, but Tom is also so consumed with simultaneously being the tough guy and the fun guy that he can’t even figure out that Greg will, of course, continue to find a way to fuck him over. It’s such a Tom logic puzzle for him to say “It’s the insurance which is causing the nastiness. If you were uninsured, you’d be a lot safer, ironically,” and also such a Tom aggro move to say “If you squeal, or you try to take copies, I’ll break your legs.” Was it actually sort of genius for Greg to keep those papers in his desk at work? Potentially! And is it actually sort of genius for Greg to stuff those papers into his clothes? Also potentially! The investigation is ongoing, and if someone offers Greg the right kind of deal for the right kind of information, he’s going to spill … right? (Greg’s behavior while wearing that wire! Again, how does Tom not pick up on the suspicious vibe of this? I’m not sure he actually implicates himself, but still.) 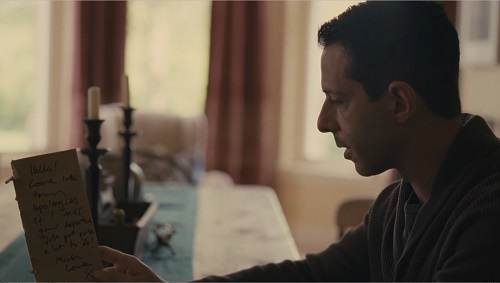 While Tom stays in New York, Kendall, Roman, and Shiv all travel to London, a return to their childhood home, to secure their mother’s 3% vote. They need her to hold the majority in the shareholder battle, and I loved how Logan reasoned this—his continued insistence that he would pay her off with up to $50 million, but he wouldn’t like it. I always wonder how the kids ended up with Logan in the divorce, but honestly, I can understand why they would leave Caroline. Both parents are acerbic, but at least Logan has the decency to ply and bribe his children with cash. What does Caroline offer, aside from comparing her children to Nazis? Pigeon full of shotput and a hastily scribbled note letting her children know she’s left the house instead of seeing them off. She is just as selfish and self-serving as Logan is, minus the physical abuse (at least that we’ve seen), and I can only imagine how awful their Christmas holidays together will be. Sniping and bitchiness between Caroline (“Should I be Mother?”) and Shiv (“Yeah, why don’t you give it a go?”) would be inevitable! I can’t wait! I need a holidays-themed episode immediately!

While Shiv and Roman are paying off their mother, Logan drags Kendall along to visit the family of Andrew, the boy whose death Kendall was involved in last season, and holy shit, is that uncomfortable. It starts with their car ride over there, during which Logan I think purposefully questions Kendall to put him off his game, and then with Logan’s insistence that Kendall come inside the home. And once Kendall gets in there, it’s an endless barrage of the life he helped destroy—photos of the boy everywhere, memories of potential cut short. Logan doesn’t take this seriously at all (“I suppose everybody has to apologize for everything nowadays,” he scoffs once he realizes that the family’s accusations that Logan bullied their son to death might endanger the shareholders’ vote), but Kendall is thoroughly rattled in this very normal home. It’s so intimate, so lived-in, so thoroughly different from the extravagant, extraneous world they inhibit, and I don’t think Kendall even knows how to exist in such a space. It hurts too much. His “Do you think I should maybe say something to them?” is self-aware, sure, but far too little, too late. (Them money he slides in the mail-slot later that night is disrespectful too, yeah?) And consider how Caroline, later on, rejects Kendall’s attempt at connection and honesty. She doesn’t even have patience for her first-born son! She flees the house the next day rather than listen to what he has to say! “We’ll feel better in the morning, and we can do it tomorrow,” but now we know that Caroline isn’t so different from Logan, is she?

Remember what Rhea said about the Roy children: “Shiv thinks she’s smarter than she is. Roman could actually be good, but nowhere near right now. Kendall’s, I don’t know, it’s like you put him in a big diaper and now he can shit himself whenever he likes. He has all the shots, but he doesn’t know how to play them.” Kendall could be a good leader, but he hates himself too much. Roman could be just as ruthless as Logan (“We do hate speech and rollercoasters!”), but he’s too much of a child. And Shiv, man, does Shiv get played here. That final scene, with her “Is it still me?” and Logan’s yelled “Family, Siobhan! If you don’t understand that, then fuck off,” is a perfect embodiment of her naivete and his ruthlessness. Logan has the balls to tell Shiv that she’s the one abandoning family when considering the Pierce job, when in reality he and Rhea made up the Pierce job to bamboozle her! The hypocrisy of that! The nihilism! 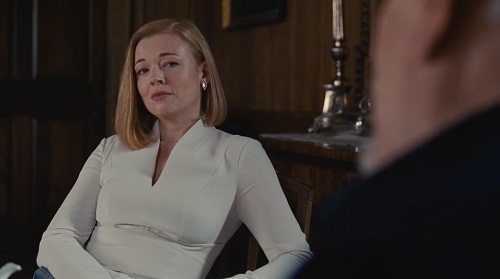 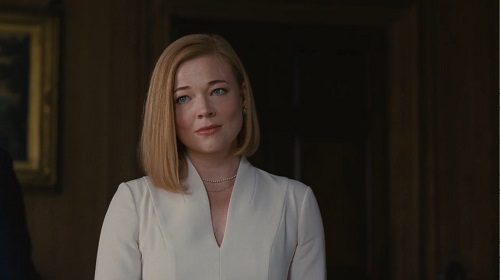 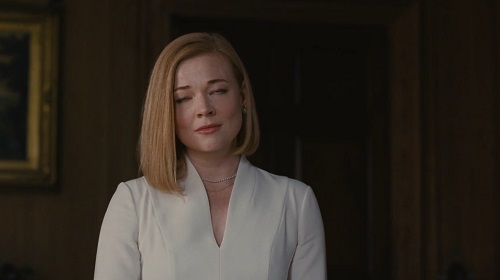 And yet even through it all, even though Shiv knows that Roman and Kendall are mocking her memo about Waystar Royco’s corporate culture (“I think the twin quotes from Thomas Aquinas and Amelia Earhart really kick us off with a bang”), even though Shiv is aware that Rhea helped Logan steal the promised job away from her, she still reaches out to Kendall. Maybe that moment with Kendall a few weeks ago, where he asked for her consideration and her mercy, came to mind, leading to her “Just be careful, OK?” But remember that Shiv doesn’t know that Kendall caused Andrew’s death, doesn’t know the depths of what Kendall owes Logan, doesn’t know how weak Kendall can himself be. Maybe the only person who can save Shiv is Shiv herself.

+ The scene between Logan and Roman, where Logan tries to excuse away his terrible slap of Roman in the last episode, plays out awfully, doesn’t it? Roman pretends he doesn’t know what Logan is talking about. Logan pretends he never connected with Roman’s face. It’s a dance that I think they’ve engaged in before, and either way, it sucks.

+ I love that Logan thinks ATN provides “news that doesn’t talk down” to viewers. And by love I mean, dear god, that’s totally what Fox News people think, isn’t it?

+ Holly Hunter is exceptional in that restaurant scene with Sarah Snook’s Shiv, where she plants the seed of the Pierce job, and she’s so good that I really can’t tell whether she actually likes Shiv or not! Because her “I feel we have a connection, and I like you” seems so genuine, and then she buries that dagger straight in Shiv’s back!

+ Naomi and Kendall are still a thing, apparently, and I love his confusion about how to take a dick pic: “How do you even do this?” was a great moment of bemused exasperation.

+ Gerri doing opposition research on Roman can’t end well, right? Also loved the little detail of her taking off her high heels when Logan declared an all-nighter; I could practically hear her thinking, “This motherfucker.”

+ I need to know more about Sally Ann, the previous woman Logan was obsessed with! What was “the summer of the horses”?!!

+ “I just wanted to someone to touch my head, you know—soothing.” Oh, Cousin Greg! You and your haircut! Also, your obsessive fear of “rape of the male” was a little jarring?

+ We saw the stress really get to Logan at Argestes, and a few more surprising things happen this week: He actually admits to Rhea, “I don’t fucking know” what to do regarding a successor, and when he is awakened by Kendall in London, he asks, “Where the fuck am I?” The man is still crude and rude (like when he calls Kendall “cuntstruck” by Naomi Pierce), but I do think these are signs of a health downturn that we can’t ignore.

+ Roman mockingly calls Shiv “Malala Roy,” but nobody can mock that blue plaid suit and turtleneck combo or her white cream pantsuit and blouse for her convo with Logan. These! Outfits! And! Those! Expressions! 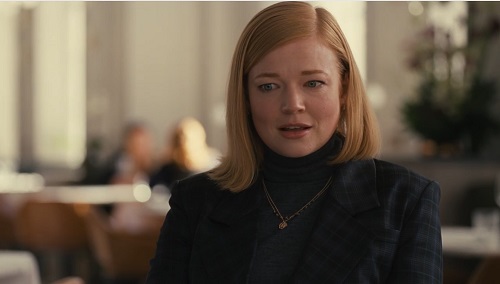 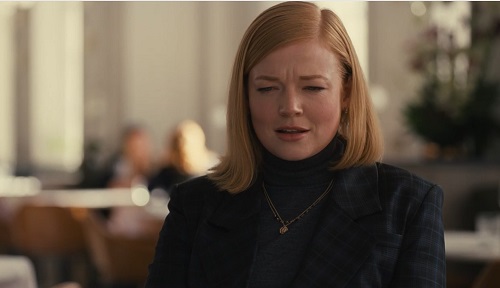 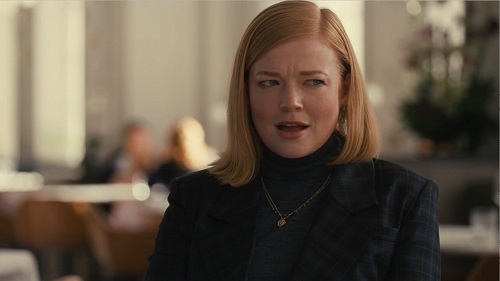 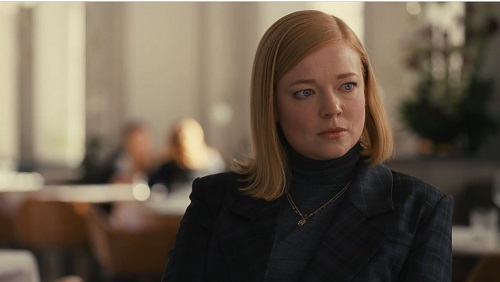 + Lots of weird parental sex stuff going on this episode, with Shiv telling Rhea, “It’s good to check before you fuck someone’s dad,” and Roman telling Logan, “I screwed Mom for you, that’s the fucking dream!” I guess this is all one way to keep it in the family.