Let’s start with the important stuff first: I hope you read the IndieWire story revealing how Big Little Lies season two director Andrea Arnold’s work was re-engineered by the show’s executive producers, by HBO, and by season one director Jean-Marc Vallée to greater fit the style of what Vallée put forth in season one. The awkwardness we’ve noticed over the course of this season, the jumpiness between scenes, the feeling that we see certain sequences playing out repetitively? I’m not sure if we can say all of that is because of how Arnold’s work was changed, but obviously some of what we’re seeing is a direct result of this. From that IndieWire piece:

While there was a significant reworking of the show’s story through additional photography and an increased reliance on Season 1 flashbacks, a large part of what guided Vallée’s reconfiguration of the second season was removing Arnold’s signature contributions. Sixty-page scripts were slashed down to 40-plus minute episodes, sources say, largely by chopping up a scene to remove what one source described as Arnold’s character exploration and “ephemeral stuff.”

When elements of Arnold’s work do remain on-screen - especially in the first episode - the scenes seem truncated, the editing especially choppy. As the season has progressed (episode 5 premiered last Sunday), the show has increasingly settled into the familiar S1 style and rhythm. Eleven editors are currently credited on the show.

According to sources close to Arnold — the director declined to speak to IndieWire — the filmmaker is heartbroken about the experience.

If you’ve seen any of Arnold’s films—like her sparse, gorgeous envisioning of Wuthering Heights—you know that she lingers in moments and margins, and certainly, this season of Big Little Lies has not reflected this on a consistent basis. It’s most clear, I think, in last night’s penultimate episode of this season, “The Bad Mother,” which again careens us between moments quite fantastic and cathartic and others that continue to suspend our greatest disbelief.

“The Bad Mother” begins with these five women, the Monterey Five, in the immediate seconds after Perry’s death: “You did not push him, and you did not push him,” we see Madeline insist to the other four, and Renata then chimes in with “No one did this, nobody.” They concoct a story and they stick with it, but to reiterate Bonnie’s constant refrain this season, the lie is getting to them—it’s getting to them all. 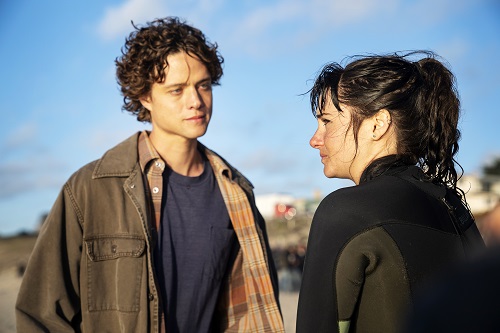 Corey isn’t a cop, he tells Jane, but he was still pulled in for questioning by the police (HOW ARE THEY STILL INVESTIGATING THIS DEATH, DOES DETECTIVE QUINLAN HAVE NO OTHER RESPONSIBILITIES?) and whatever early trust Jane built in her relationship with him is gone. Madeline had been so honest with Ed after their miserable experience at that marriage retreat, but as soon as she starts talking about the women’s meetup at the beach, Ed can sense that she’s lying again. (Adam Scott’s very dry delivery of “During all the solidarity, is that when ‘Fuck off’ came up?” was magic.) Renata is trying her hardest to keep it together during her bankruptcy proceedings, but the revelation that Gordon had an affair with their nanny is just too much (and taken from the book!), leading to yet another instantly meme-able moment in Laura Dern’s “Shut the fuck up for the rest of your fucked-up fucking life!” Where is my gif of this? I NEED A GIF OF THIS. 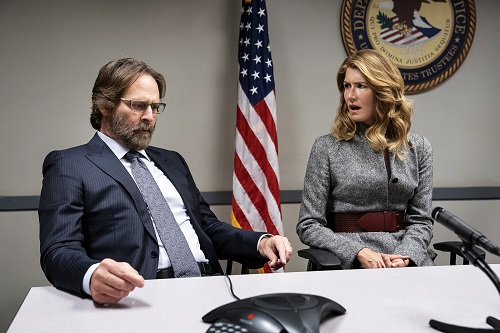 But all of these stories are secondary, of course, to Celeste and to Bonnie, their pain linked together, their trauma existing in silos. It’s interesting to me how many scenes this season Celeste and Jane have shared while Bonnie, who did this horrendous act to protect Celeste, doesn’t seem to have talked to her alone. Have we seen that? Have I just forgotten it? Or, now that we know how much alteration there was to Arnold’s original work, is there any possibility that we had those scenes previously, but it served David E. Kelly’s soapier preferences to have Madeline screaming at Bonnie or Celeste masturbating to Perry’s video chats? I don’t know! I can’t tell!

I will say, though, that as much as we whipped through our scenes with Bonnie and Celeste this week, it finally like we got some progress for both of them. Let’s start with Bonnie, whose scenes are dominated by visions, confessions, and memories—a dream of smothering her mother, a suggestion to the doctor that they kill her, flashes back to Elizabeth’s abuse but also her good moments, and finally the reveal that so much of Bonnie’s identity has been shaped in response to her mother’s presence and her absence. Did I think Bonnie was writing a confession to Detective Quinlan in her green notebook by her mother’s bed? I did! Do we see Bonnie imagining standing up while Celeste is in court to say her piece? We do! But if that confession to Detective Quinlan happens, we don’t see it happen yet: Instead, the twist here is that Bonnie confesses to her mother first. A confession about her anger, about her years of resentment, about the physical and emotional abuse she suffered, about the self-destructive choices she made, and, the kicker: “I resent you for making me feel so fucking worthless that I settled for a man I don’t…” Why is Bonnie with Nathan? Because she didn’t think she deserved anything, or anyone, better—because she had been conditioned to believe, because she had been taught, that she didn’t.

That feeling of never being enough links Bonnie to Celeste, who we see questioned viciously by Mary Louise’s lawyer during her two appearances in family court, and who comes off initially looking quite bad. The drugs, the drinking, the parade of men—so many men! Ira makes Celeste look like a liar, like a manipulator, like a fool, and as expected, the question of Perry’s death comes up as Detective Quinlan looks on, sneaking glances every so often to the row where Madeline, Renata, Bonnie, and Jane are listening with rapt attention to Celeste’s testimony. Is this the most Celeste has talked about what she went through while married to Perry, and about her grief and guilt and loneliness afterward? I think so, and this is obviously the flashiest work Kidman has done this season. I keep going back to that scene where Ira asks her about all the men, and the mixture of resistance and provocation and defiance Kidman brings to Celeste’s answers, how she knows that this man is trying to make her out to be a whore and how little shame she’s going to allow him to stick to her. Remember:

And what stuck out to me in particular was how Ira asks Celeste “Are you healed now? Are you really over your sickness?”, as if the pain of domestic abuse just goes away after a certain predetermined period of time. It’s clear in Bonnie and Jane that shit like that sticks with you, and I think what Celeste says about why she stayed with Perry is one of the most insightful rebuttals to those condescending “Well, why didn’t she leave?” comments about domestic abuse:

Her honesty sways the judge a little bit, I think, but I appreciate that Celeste refuses to be passive by the end of this episode. Her declaration that she wants to question Mary Louise herself is clearly charged with emotion, but isn’t this also the most we’ve seen Celeste in control, ever? And to be true, I totally see her point. Even if we didn’t despise Mary Louise—which, don’t get it wrong, I DO—wouldn’t it make sense that the person asking for guardianship should be able to prove their own worth, not just the flaw of the other person? I’m not a lawyer, so if someone can explain if/why I’m wrong in the comments, please do. But Celeste “It’s my fight, your honor, I ask that you let me wage it,” was a great moment, and Mary Louise’s smug little smile in response to that made me want to scream, and so I reacted in every way that Big Little Lies wanted me to. I just wish we knew if any of that was Andrea Arnold’s work or intention.

+ Why are Ziggy and Max and Josh running their mouths so often to Mary Louise?! We learn during Ira’s questioning that the twins had told Mary Louise about seeing a man in bed with Celeste, and then we learn later that Ziggy told Mary Louise Jane had bought a gun. Why don’t these children understand boundaries?

+ Shailene Woodley doesn’t have that much to do this episode, but again, I appreciate her dynamic against Meryl Streep. Jane’s “I see a woman who’s struggling. Who isn’t?” was so righteously defensive of her friend, and Mary Louise’s “Are you struggling, Jane? With your conscience, perhaps?” was so soapy, but I think Jane got the last word in with her screamed “Yeah, maybe I would have fucking shot him. I didn’t get the fucking chance!” When will Mary Louise ever accept that Perry was a monster?!

+ Oh, and by the way, if how Perry’s brother died doesn’t come up during Celeste’s questioning of Mary Louise, and if a revelation somehow tied to that information doesn’t factor in majorly to the conclusion of this custody hearing, then what is the point of this show? 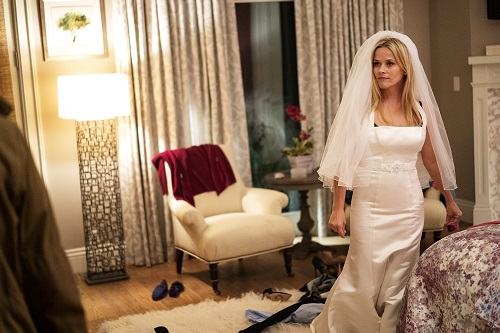 + Speaking of Ed, his bemused and charmed response to Madeline’s drunken dancing around in her wedding dress (“It doesn’t fit, but we’re not talking about that”) to Patti Smith’s cover of “Everybody Wants to Rule the World” makes me think they could make it as a couple, but only if Madeline comes clean. And there is something that happens in the book that I won’t address here, but … I’m curious about how this goes. And credit to Witherspoon for that scene, too; I tweeted this last night and stand by it.

madeline dancing around to patti smith in her wedding dress that doesn't fit anymore is recognizably clichéd but also the EXACT scene that reese witherspoon fucking nails — that mixture of hardness and softness and fragility and anger. that whole whiskey in a teacup thing. #bll

+ Aside from Patti Smith, last night we also got “It’s Over” by Roy Orbison (“All the rainbows in the sky start to even say goodbye/You won’t be seeing rainbows anymore”), “Rippin Kittin” by Golden Boy and Miss Kittin (“Mommy, can I go out and kill tonight?/I feel, I feel like taking a life”), “Until You Came Into My Life” by Ann Peebles (“I want you to know you became my everything”), and, most pleasing to 13-year-old me, Placebo’s cover of Kate Bush’s “Running Up That Hill”!

+ But also: Madeline was a grade-A bitch with her explosion at Bonnie, and it felt again like that scene needed a precursor. The intensity of Madeline’s fury was unexpected: “Fuck off, Bonnie, I’m so fucking tired of taking care of you and your fucking feelings” was intense. And interesting that it was Renata who came to Bonnie’s rescue in that moment with her “No one pushed anybody, he slipped,” and that it’s Renata who later says, “It’s a fucking pact, Madeline.” I suppose I’m not surprised that Renata takes all her vows seriously, even though that means she’s still married to Gordon, “you fucking fuckshit.”

+ Did you notice that “Michael Something,” one of the guys Celeste was sleeping with, was played by Travis Schuldt, of Passions and It’s Always Sunny and Splitting Up Together? Yes! IT WAS!

+ Mary Louise’s worst moment this episode, of course, is her thoroughly patronizing “At the end of the day, we are still family” before she tries to take Max and Josh away. Rip her apart, Celeste!