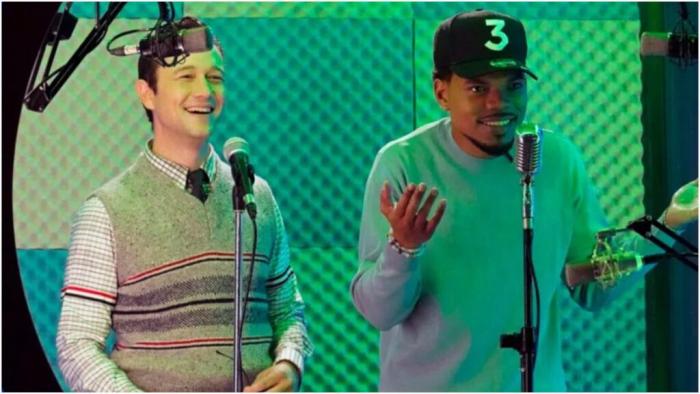 Please Don't Rake Me Over the Coals, but Jimmy Fallon's 'That's My Jam' Is a Blast

I dialed up NBC’s That’s My Jam on a whim around midnight a couple of nights ago out of morbid curiosity. I knew nothing about the show except that messy power couple Rita Ora and Taika Waititi would be appearing. I expected to give it a couple of minutes before turning it off.

The damn show sucked me in.

The game show pits two teams of celebrities against each other in a series of musical games that originated on Fallon’s The Tonight Show. The first bit I saw was a sort of Name that Tune game called “Launch the Mic,” where Ora and Waititi compete against Normani and Taraji P. Henson to see who can launch a microphone in the air, catch it, and identify a popular song that has been slowed down or speeded up. What becomes apparent immediately is that the rules do not matter, Jimmy Fallon has no ability to control the situation, and that either Taraji P. Henson is drunk or one of the most wonderfully wild celebrities on the planet. She also has an amazing voice. The whole thing is a spectacular, joyful mess.

The first half-hour of the show entails a series of goofy games that change each episode, but it’s in the second half — after everyone has loosened up — where it gets fun. That’s when they trot out “Wheel of Musical Impressions” where, for instance, a celebrity has to sing Katy Perry’s “Firework” in the style of Robert Smith of The Cure. To wit: Joseph Gordon-Levitt bringing down the house.

Or maybe Chance the Rapper singing Nelly’s “Hot in Here” in the style of a country rock. It should not work, but it absolutely works.

If that’s not your thing, first off, what’s wrong with you? Second, maybe Kelly Clarkson and Ariana Grande battling it out in a mixtape medley of Diva Songs will be your bag. Are you impressed by Kelly Clarkson? Because you’ll be even more impressed after watching this.

As you can probably guess, the game elements of That’s My Jam quickly become irrelevant, and it soon becomes about watching (mostly) likable celebrities both showing off unheard-of talents and f**king around. I doubt that JGL and Chance the Rapper knew each other before setting foot on the stage, but after an hour, they were practically best friends.

Needless to say, after tuning in on a whim, I ended up watching the rest of the available episodes with my family, who also came into the show skeptical but ended up demanding to watch the rest. I’ve never been a huge fan of Fallon and his earnestness, but he’s hardly a factor on the show. Besides, after four years of Trump and two years of the pandemic, our culture seems to be coming back around to what made Fallon so popular in the first place: A brief respite from reality. It’s pure stupid fun.

Let’s end this on my favorite moment of the series, so far. The final game is called “Slay It, Don’t Spray It.” The players are asked to sing along to a popular song karaoke-style. At some point, however, the lyrics are taken away from them and they have to finish the line from memory. Failure to do so gets you “sprayed” by the mic. Watching JGL briefly lose it when the game f**ked up after he clearly sang the lyrics to “Living on a Prayer” accurately is priceless.

That’s My Jam airs on NBC and Peacock. I promise to watch The Lost Daughter twice to make up for the lost brain cells.