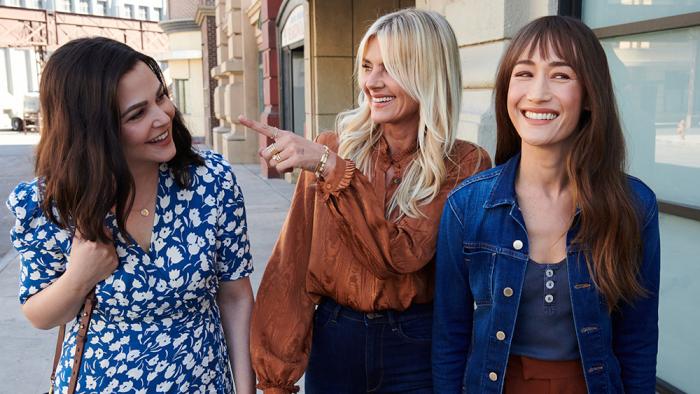 Is Fox’s new sitcom Pivoting a bad show? I don’t know. What even is bad? Did you know that it boasts a 100 percent on Rotten Tomatoes, which is interesting because Parks and Recreation only has an RT score of 95 percent? Is Pivoting better than P&R? It is not! But therein lies the limitations of Rotten Tomatoes where, despite its perfect score, it boasts review blurbs like, “Not wildly funny yet, but definitely wacky,” and such raves as, “the writing is inconsistent,” it has “occasionally funny moments,” and “it’s amusing enough,” plus, “Despite the phenomenal cast, Fox’s Pivoting is bad.”

That last one was mine. Why is that considered a positive review? It says “bad” right there in the blurb!

Maybe Rotten Tomatoes knew something I didn’t because Pivoting has grown into a splendidly and often very funny sitcom. Again, it has almost everything to do with the cast, although credit where credit is due. The writing, overseen by showrunner Liz Astrof (King of Queens, 2 Broke Girls), has also markedly improved as the season has progressed.

It always helps when a sitcom’s initial premise falls away, allowing the writers to focus less on the gimmick and more on the characters. The premise here is that three women decide to upend their own lives after their best friend unexpectedly dies. Amy (Eliza Coupe) decides to parent her children instead of leaving it to the beloved nanny; Jodie (Ginnifer Goodwin) decides to pursue an affair with her gym instructor instead of devoting herself so fully to a lousy husband; and Sarah (Maggie Q) decides to quit her stressful job as a doctor and work instead as a cashier in a grocery store.

That premise still exists, but Pivoting no longer feels hemmed in by it, although the best part of the show is watching Amy try to be a good mom after ignoring her children all their lives. That has a lot to do with Coupe herself, who has the best sarcastic and profane delivery in comedy. For reasons that make absolutely no sense, Coupe has been unable to land a gig that lasts more than a few seasons since Happy Endings, as she bounces around from one ill-fated project to another (Benched, Quantico), although Future/Man was good for a season and a half, and she has had some stellar recurring roles in The Mindy Project and Casual (the latter of which stars Tommy Dewey, who plays her husband on Pivoting). Watching Coupe curse her way through misguided parenting adventures is an absolute delight every week.

Goodwin and Maggie Q are both excellent, as well. Goodwin’s Jodie is a straight-laced soccer mom who has decided to live for herself, whether that means discovering the joys of a vibrator or sleeping with her much younger gym instructor (but only after she loses 8 more pounds, a goal she is having trouble meeting because doing her lousy husband dirty is causing her to binge eat). Maggie Q’s Sarah has the weakest storyline, although even she has been able to mine it for some decent comedy, like when she took offense to being referred to as a Millenial and spitefully f*ked her hot, younger co-worker in the break room.

It’s all come together surprisingly well, and the addition of Superstore’s Colton Dunn as their late friend’s widower has kicked it up a notch. Dewey is likewise terrific as the laid-back straight man to Coupe, while the occasional appearance of Jodie’s husband (Robert Baker, who looks like a good-looking version of Biff Tannen) has helped provide some dimension to her marriage (also fart jokes, for better or worse).

All of which is to say: I take back my earlier assessment, which was mischaracterized by Rotten Tomatoes. Pivoting is a blast that I look forward to watching every week, which almost certainly means Fox will give it the ax after one season — its overnight ratings are not good (it lost out to a rerun of CBS’s B Positive last night), but it might do better the next day on Hulu, which is where comfortable network sitcoms should be viewed, anyway.

Pivoting airs Thursdays on Fox and the next day on Hulu.


← Ryan Reynolds' 'The Adam Project' Looks Like Timey-Wimey Space Opera Nonsense. Sign Me Up. | Alice in Chains' Lane Staley The Most Cathartic Scream Of All Time →