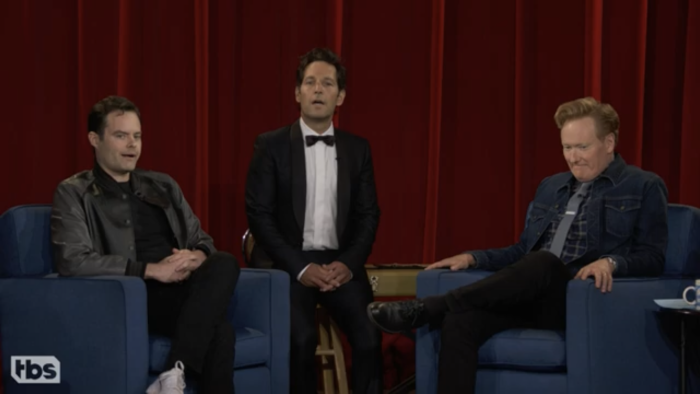 Paul Rudd Made One Last Triumphant Appearance On ‘Conan’

It happened! Just in the nick of time! Paul Rudd “interrupted” Conan’s interview with Bill Hader to make what will likely be his last appearance on Conan’s show. Over the years, instead of debuting a clip from whatever movie he’s promoting, Rudd would play a scene from the cinematic masterpiece Mac & Me. As many readers here will be happy to learn, he did not break that tradition last night.

Halfway through Bill Hader’s interview, Hader began telling a story about a sketch he pitched on SNL that went over … poorly. He accused then host, Paul Rudd, of being the reason why the sketch did not succeed. So, Rudd emerged, clad in a tux, to dispute this notion. He claims to have the sketch in question on tape and cues it to play and … look, just watch the interview first.

As you can guess, that’s the clip that Rudd plays instead. On TBS, it then cut to Conan wrapping up the show. However! If you find the clip on YouTube (which I will post below, I swear), Rudd and Conan discuss the history of the clip and Rudd’s appearances. It’s really wonderful and drives home the fact that everyone should be looking up the longer bits of Conan’s show on TeamCoco.com.

Only three shows left. Plenty of surprises left in store, I’m sure. It’s a true end of an era and I will miss it dearly.


← Real-Life Karen, Taryn Manning, Stars in the Trailer for 'Karen,' Which Is Real-Life Bad | There Will Be No More 'Before' Movies According to Julie Delpy →