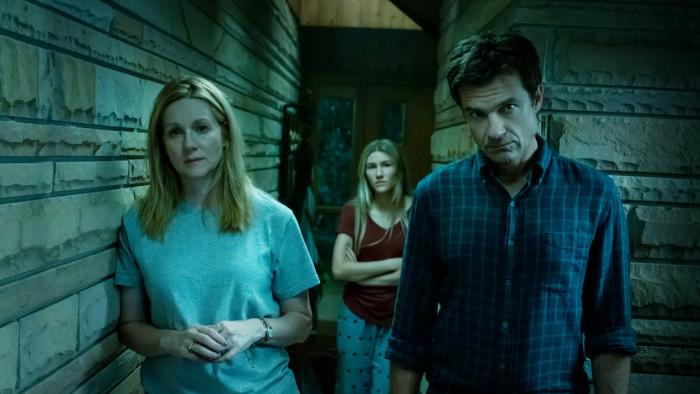 'Ozark' Is Still Doing What 'Ozark' Does, Now In Its Fourth Season

It’s the fourth and final season of Ozark. There’s not much else we can add about the series at this point, and in its last season, it’s not doing anything different from the prior three seasons. It is what it is, and either you like Ozark or you don’t, although whether you like it or not may have no bearing on whether you’re still watching. It’s a good binge. It’s hard to deny.

Ozark is heart-attack TV. The entire point of the series seems to be to try and stress out viewers as much as possible. It’s the television equivalent of a rubber band stretched to its limit. Will it break? Or will it hold? Do we care? Because save for Julia Garner’s Ruth Langmore, these are not particularly likable characters, but we care about them just enough not to want to see them die. Barely.

The stakes are bigger in the fourth season. Marty and Wendy Byrde (Jason Bateman and Laura Linney) are involved in a felony triangle of sorts. They’re working with the Navarro cartel in Mexico to secure enough opium to supply a family-owned Purdue Pharma type of organization with all they need to manufacture their pain meds. This gives them enough money for Wendy to amass legitimate power. The $150 million she receives from the sale will provide her with the necessary war chest she needs to exert enough political influence in the midwest to pick and choose the winning candidates. Wendy wants to be a political kingmaker, while Marty is mostly interested in transitioning their casino and money-laundering operation into a legit business and moving back to Chicago to open up some office space. Living the dream!

Drug kingpin Omar Navarro (Felix Solis) wants the Byrdes to launder him, so to speak. By working with the feds and their go-between, Special Agent Maya Miller (Jessica Frances Dukes), Omar wants them to cut him a deal so that he can walk away from his cartel with all of his money before he’s assassinated by an up-and-comer. That up-and-comer is Omar’s nephew, Javi Elizondro (Alfonso Herrera), a young and erratic successor who is quick to murder anyone who stands in his way. And he does.

Ruth, meanwhile, is now using the money-laundering skills she picked up from Marty to work with the Byrdes’ former nemesis, Darlene Snell (Lisa Emery), and her opium operation. That’s complicated, however, by the fact that the Navarro cartel wants the Snells out of the business, the KC Mafia no longer wants to work with them, and they’ve lost their grip on the local police force. Ruth has also recruited Marty and Wendy’s son, Jonah (Skylar Gaertner), to help her launder money. He is working for his parents’ former competitors mostly out of rebellious spite. Meanwhile, their daughter Charlotte (Sofia Hublitz) is considering skipping college and jumping right into the family business.

There’s also still the matter of covering up the murder of Ben — Wendy’s brother, whom she had killed — and the disappearance/murder of the Navarro cartel’s lawyer, Helen (Janet McTeer). There’s a hard-nosed former cop turned private detective trying to track down Helen to get a signature for her divorce, and his constant presence threatens to expose the murders of Ben and Helen and unravel everything.

A lot is going on here in terms of plot, but it’s also important to note that, as always, Ozark has absolutely nothing important to say. That is not necessarily to its detriment — not everything needs to say something — but it does keep Ozark out of the conversation when it comes to the best of what television has to offer. That doesn’t mean there aren’t strong performances on hand. Julia Garner is already the break-out star of Ozark, a hell of an actress who has already picked up two Emmys for her performance as Ruth. Jason Bateman is hilariously the same character whether he’s in a dark drama like Ozark or in a comedy like Arrested Development, and yet it works (there is almost no difference between when Bateman exasperatingly says his wife’s name, “Wendy,” or when he exasperatingly says the name of Will Arnett’s character in Arrested, “Gob.”) Laura Linney’s Wendy, however, is the most dynamic character. She’s evolved in four seasons from the clueless wife to the Margo Martindale of the whole operation: She is shrewd, ruthless, and power-hungry. She’s the Walter White, and also the most likely person to get them all killed.

Mostly, Ozark continues to work the way it always has: By slowly ratcheting up the tension so that viewers have no choice but to hit NEXT EPISODE because, only at the end of a season (or half-season, in this case), will it offer any sweet relief. Once that tension is released, however, you probably won’t think about Ozark again until the next batch of episodes.