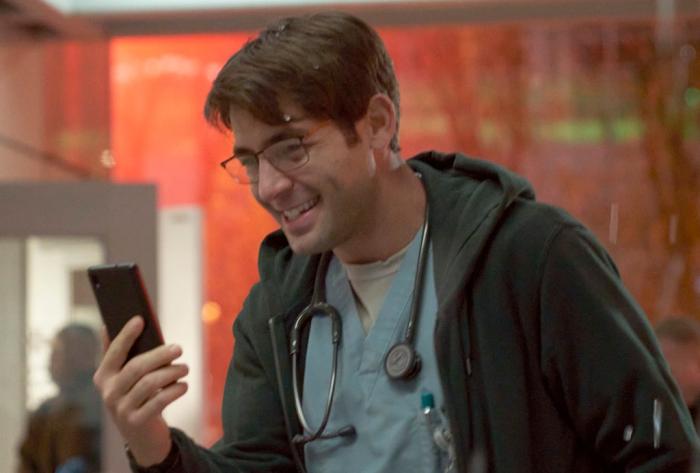 Best known now and perhaps always as Bob Benson on Mad Men (Not great, Bob!), I’ve long had a soft spot for James Wolk dating back to Fox’s beloved 2010 pilot for Lone Star, the best received new show of the 2010 network season. The Kyle Killen (Awake) series was canceled after two episodes because it was too good for network TV.

That’s how it’s gone for James Wolk for much of his career. He’s an odd bird as an actor, the kind of guy who plays sleazy in prestige dramas (see The Watchmen) but an average, good guy on network, which is what made him so good in Lone Star as a sleaze masquerading as an average guy on a network show with a prestige sheen (back when networks were still trying to compete with streamers). Wolk just looks like a midwestern guy who is the son of a teacher and a shoe store owner, which is exactly what he is.

It makes him well-suited to Ordinary Joe, a high-concept feel-good drama that could either tank and get yanked after half a season, or run for 5 seasons. Network television is completely unpredictable these days. Wolk plays Joe Kimbreau, who — after his college graduation — is faced with a choice between three decisions: Go have dinner with his parents; meet his best friend and occasional sex buddy, Jenny (Elizabeth Lail); or pursue Amy (Natalie Martinez), a woman he just met. The series picks up 10 years later, and in Sliding Doors fashion, we get to see how each of these decisions plays out.

In the life in which he goes to the beach with Jenny, he’s an overworked doctor, they have a son with cerebral palsy, and their marriage is falling apart, owing to the demands of his work schedule. Amy, meanwhile, is married to Joe’s best friend, Eric (Charlie Barnett).

In life number two, he pursues Amy. Here, he’s married to her, he’s a famous rock star, and his best friend Eric is single. In this life, Amy is having fertility problems, endangering Joe’s dream of being a father. Amy is pursuing political office, and Jenny’s a partner at a law firm.

In life number three — the one in which he goes out to dinner with his parents after graduation — Joe is single, he’s a cop, and he bumps into Amy — a campaign worker — kindling a potential romance. Jenny is a single mother and an assistant district attorney who Joe sees for the first time in a decade at their college reunion.

All three lives are populated with the same set of characters; the series is not really about which life is better or worse, but more about which directions one decision made at the age of 22 takes him. There are ups-and-downs and pros-and-cons in each life, and each of the three lives remain in the same orbit. There’s one sequence, for instance, where rock star Joe is playing a concert that conflicts with a campaign appearance where, in another life, cop Joe saves a Congressman from being shot, and a third life, where doctor Joe saves the Congressman after he is shot because cop Joe is not there to save him. Despite the show’s best efforts, keeping up with each timeline can be occasionally confusing.

It’s not a “great” show — and the writing can be wobbly at times — but it’s not a bad one, either. It’s a feel-good melodrama designed to elicit tears of both the happy and sad variety. Like The Big Leap, it’s also a decent alternative to a lot of the bleak genre television and superhero shows currently suffocating the streaming airwaves. I love Mare of Easttown and Y: The Last Man as much as anyone, but I’m not going to look askance at a comfort show featuring a likable, underappreciated actor, which is to say: This is not going to be this season’s Manifest. I am, however, still holding out hope that La Brea fills that hole. In the meantime, I’ll probably continue to watch this until it runs out of steam, which could be next week or midway through season three.

‘Ordinary Joe’ airs Mondays on NBC and on Hulu the next morning.