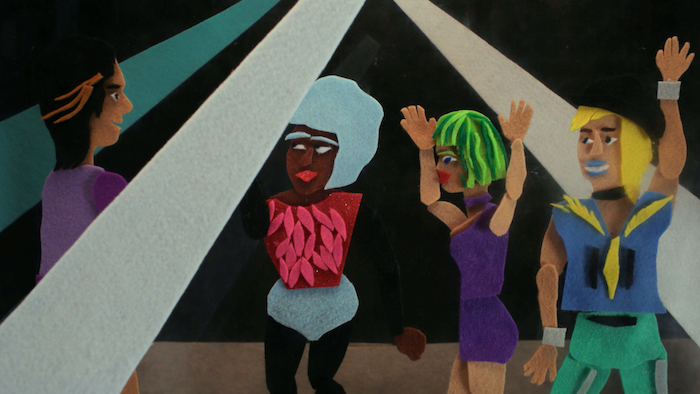 Now on Netflix: 'Worn Stories' Unfurls Yarns About The Clothes That Shape Our Lives

Is there something special in your closet that speaks to the very core of who you are? Perhaps it’s a pair of boots worn on a joltingly fateful day. Maybe it’s a jacket that allowed you to feel like the badass you dream to be. Possibly it’s been passed down, and so is a thread a back to family and heritage. These are some of the stories explored in Worn Stories, a docu-mini-series inspired by Emily Spivack’s New York Times Bestseller.

Over eight 30-minute episodes, Worn Stories unfurls the fabric of our lives with tales big and small. In a sparse space, an unseen interviewer urges people of various age, races, faiths, and genders to share their stories, and show off the clothes they center on. Some of these are told simply in talking head setups. Others get quirky re-enactments involving mixed-media animation, miniatures, and puppets. Still others get a more in-depth treatment, with camera crews traveling to New York City, Vegas, and Florida to get on-the-ground footage. The first of these is cheeky introductio to a trio of Kissimmee nudists, whose favorite garment leaves little to the imagination.

Rather than structured by location or chronology, Worn Stories names its episode after themes, like Community, Uniform, Chance, and Love. However, each of these themes is loosely realized, so every episode is a grab bag of stories, with mixed results. Some stories are treated as little more than cute accessories, given little screentime, but shining sufficiently for that. Some bigger stories have a flashier component, like an unexpected celebrity cameo. For instance, you might not know the name Tim Cappello, but you might recognize the sexy saxophone player’s signature leather codpiece. “I got that codpiece from Tina Turner,” he recalls, and just like that we’ve got a thread worth tugging at! Tim’s story weaves into how this one garment radically changed his life, not once but twice. He talks about fame, fortune, and the cold impact when both are lost, but then the dizzying delight when they come back without warning. With an unexpectedly mellow attitude, and a willingness to share the messier parts of his life alongside the glamorous bits, he becomes a standout in a long runway of Worn Stories.

Also excellent is Charo. More Charo please and thank you. The Spanish American triple-threat is one of the smaller sections, but makes every moment a treasure. At 70, she’s still got the energy of her Cuchi-Cuchi heyday, and comes alive when talking about how her “hippie” sister was her personal designer. Charo speaks about every aspect of the story of one particularly pristine stage-costume with electrifying energy, whether she’s lamenting the diet demanded or insisting that her sister “is a bitch” who “doesn’t care about money.” On paper, that might sound bad. But coming from the highly glossed lips of this iconic firecracker, it’s an ode of love so inspiring, you wish she’d call you a bitch too!

Of course, not all stories need celebs to shine. In “Growing Up,” a 13-year-old Jewish, non-binary child called Spirit explores how fashion might define their b’nai mitzvah. “I’m going to have the best outfit, and I’m going to look so awesome,” Spirit proclaims to friends. But in interviews, a nervousness creeps in, because this ceremony (typically gendered as bar or bat mitzvah) will be a major moment. So, what to wear? And how do gender norms play a part in the pressure of what’s appropriate? With green and purple hair and a matching vibrancy of personality, Spirit shares insights into their journey and what being non-binary means to them. Now, they have a chance to share who they truly are with their wider religious community. So the question of ‘which thrifted shirt truly says Spirit’ carries weight. Worn Stories gives Spirit enough space that we get to know them, so when the big day comes, we truly get to share in the celebration, not just watch it.

However, other stories feel underserved by this format. In some cases, I wanted more, like a fuller portrait of the Muslim teen who dreamed of being the first Kurdish player in the NFL. Other times, a main narrative felt confounding alongside other tales that had little to do with it. In particular, a story about a young white man who is walking across the world for fun (and presumably a book deal?) felt indulgent compared to the tales of adversity that surround it. Then there’s the uncomfortable story of a grieving father, who uses ghost-hunting tools to communicate with his departed son. This tragedy is barely revealed before the show rolls out EVPs and his ghost advocacy, which means recording white noise for others in mourning and in search of messages. That he sometimes wears his son’s old hoodie doesn’t feel a strong enough tie to the series’ central concept to justify this abrupt and controversial dip into paranormal territory.

That’s ultimately what makes Worn Stories feel a bit too fluffy. It’s not interested in digging deep into how clothes shape our lives. That might take us into territory too fraught to keep the overall bubbly tone that allows us to leap from codpieces to memorial t-shirts without whiplash. It’s a show that gleefully folds in club kids, firefighters, and luchadores, alongside quirky characters who are so much more than their most sentimental garment might suggest. There’s a gleeful “yay for everyone” attitude created by thoughtfully inclusive representation. However, the clumsy jumble of stories in each ep doesn’t do justice to the big messages within them. So, some tales turn into little more than filler.

Overall, Worn Stories is a feel-good watch, but frustratingly superficial. Still, while the execution is underwhelming, there’s a rich ribbon of open-mindness throughout, which unfurls lesser-told stories with a radiant empathy. That’s something special.

Worn Stories is now on Netflix.


← Stabler is Stabler, but 'Law & Order: Organized Crime' Is Not Like the Others | 'Manifest' is Back. Unfortunately →