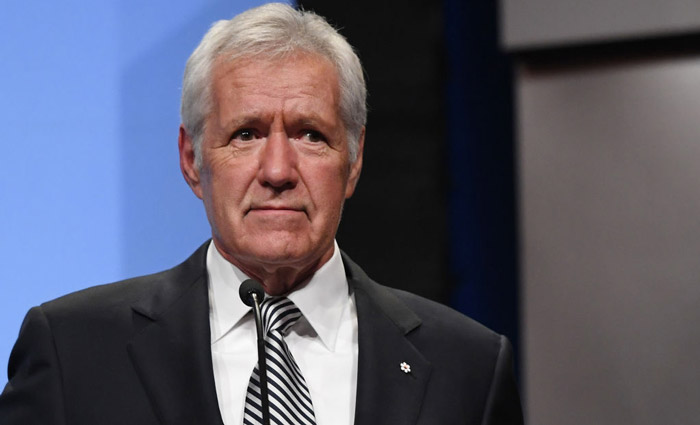 NO: Donald Trump Will Not Replace Alex Trebek On 'Jeopardy!'

With the passing of Alex Trebek, fans of Jeopardy! are wondering who could possibly replace the beloved game show host. Well, The New York Post is floating Donald Trump as a longshot, and no. Stop it. We hate it. Even by 2020 standards that’s sh*tty and ridiculous.

To be clear, if you click through the Post’s headline, you will not see any news that the lame-duck president, who is binge-eating fast food, golfing, and attempting a clumsy coup, is being considered for the position of Jeopardy! host. All this is about is that a sports betting site has listed a bunch of names for Trebek’s replacement. At the bottom of that list is Trump.

Former Jeopardy! champion Ken Jennings is the favorite for the position, both on the list and in public speculation. He’s followed by ABC news anchor, George Stephanopoulos, who The Wrap reports is actively pursuing the gig. Other popular suggestions on this betting site are Reading Rainbow’s LeVar Burton, astrophysicist Neil deGrasse Tyson, and Pat Sajak, who is already fully employed as host of Wheel of Fortune.

In short, the Post story isn’t news. It’s the same kind of “CONTENT” where certain blogs pluck fan art from the web to speculate WHAT IF THIS RANDOM CELEBRITY JOINED A SUPERHERO FRANCHISE AS THIS CHARACTER? It’s not based on any activity or even rumor. Yet, it’s the kind of thing that can spur clicks, because you’re taking two popular keywords that insight a lot of passion and jamming them together. It’s click-bait.

In this Jeopardy! instance, Trump is all over the news because of his refusal to concede or in any way behave in the etiquette befitting an exiting U.S. President. Trebek is all over the news because people around the world are mourning the loss of a man who exuded confidence, wit, and grace under pressure. Slamming those two names—and very different personas—together in a headline makes readers take notice. It doesn’t matter that the link offers no actual news because you’ve already clicked, and a click is a click is a click. $$$!

So, you might well wonder, are we at Pajiba doing the same thing as The Post hereby covering this non-story. To some degree, yeah. However, we’re not doing it to cash in on the panic of this moment, where many Americans still feel fear over Trump’s influence. We’re doing it to call out b*llshit:

No. Donald Trump will not host Jeopardy! No one has asked him. He is not lobbying for the role. He will be not allowed to use the podium of this revered trivia-show to further dumb down American audiences.

Trump’s odds on this sports betting site fall far below polarizing figures like Piers Morgan and Joe Rogan. It’s very unlikely the show would aim to court such controversy in recasting with any of them. (It’s not Dancing With The Stars). So, if you love Jeopardy! and hate the orange oaf who’s crop-dusting the Oval Office with burger farts, you don’t need to worry.

While we wait for actual news on the Jeopardy! front, revel in the glory that was Trebek by revisiting bloopers and the touching cold open that marked his passing. Or keep watching Jeopardy! Thanks to Trebek’s determination, there are 30-some new episodes coming that feature the impeccable TV personality.

← All That Trump Anxiety You Are Feeling? The News Media Feeds On It | Samantha Bee Thanks Nevada For Voting Blue This Election →