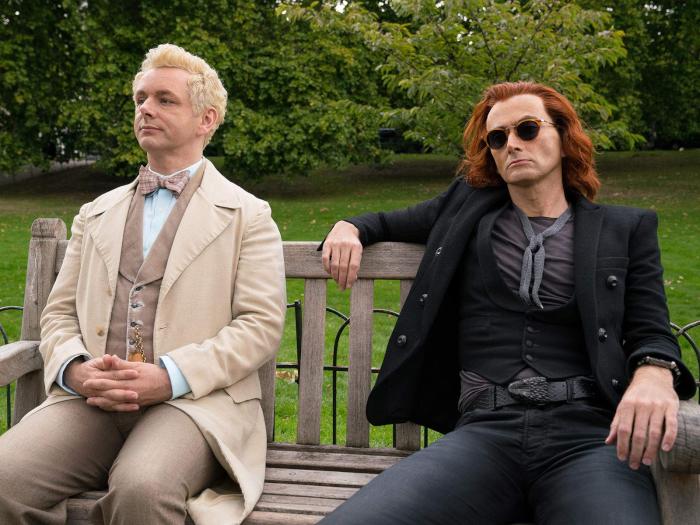 Not that we’re complaining. Have you seen Staged on Hulu? Tori turned me (and Mrs. Pajiba-hyphenate) onto it, and it’s an absolute delight. It’s Michael Sheen and David Tennant playing themselves (with their wives) and just dicking around with their friends during the lockdown. They have impeccable chemistry together, whether they play themselves or Aziraphale and Crowley, and I’d be happy to watch them hit each other with phone books.

Shooting will begin later this year in Scotland, and Deadline has a rough outline of what the second season will be about:

The new season will explore storylines that go beyond the original source material; having been on Earth since The Beginning and with the Apocalypse thwarted, Aziraphale and Crowley are getting back to easy living amongst mortals in London’s Soho when an unexpected messenger presents a surprising mystery.

Quick question: If a show wins an Emmy in the Limited Series category and subsequently airs a second season, do they have to return the Emmy?

Elsewhere, John Lithgow is returning to Dexter in a “short but decisive” appearance in the forthcoming Showtime revival, which is interesting because his character was actually killed off in the fourth season. Perhaps he will make a “short but decisive” appearance in either a flashback, or as one of Dexter’s Dark Passengers (it’s not been confirmed, but I expect that Jennifer Carpenter will play that role for most of the season). Lithgow previously won an Emmy for that role.

Side note: Lithgow also writes and narrates kids’ books, and this was one of my kids’ favorites back in the day. It’s so good:

Finally, did you know that three weeks into its streaming release, Manifest is still the top show on Netflix, despite its cancellation on NBC? And despite the fact that Netflix passed on picking it up? I don’t recall seeing anything remain on the top of the Netflix charts for this long. There are also only two seasons. I wonder if it has resulted in an uptick of Peacock subscribers, who want to watch the third season? Interestingly, it’s also resulted in a huge traffic uptick for a particular post of mine, “Why Viewers Should Stop Watching Manifest Immediately.” I wonder if it’s because thousands of viewers are frustrated with the series and wondering if they should quit already?

In any respect, despite the cancellation and despite the fact that Netflix passed on it, showrunner Jeff Rake is not giving up.

Your support is awe-inspiring. We’re trying to find a way to conclude the series. Could take a week, a month, a year. But we’re not giving up. You deserve an end to the story.

Keep the conversation alive. If it works out, it’s because of YOU. 🙏⁰⁰#SaveManifest

None of this makes sense to me, but it’s also clearly a big streaming hit and not a particularly expensive show to make, I wouldn’t imagine, so it would seem to make financial sense for someone to keep it around. It’s a co-production between Universal and Warner Brothers, and though it absolutely does not align with HBO Max’s brand, it’s a sensible relocation for the series if NBC is gonna continue to ignore it.

I’ve never been so invested in anything I disliked this much.


← Lucas Black, From the Worst 'Fast & Furious' Movie, Has Opinions | Tarantino's 'Once Upon a Time in Hollywood' Novel Erases the Mystery Surrounding the Death of Cliff Booth's Wife →