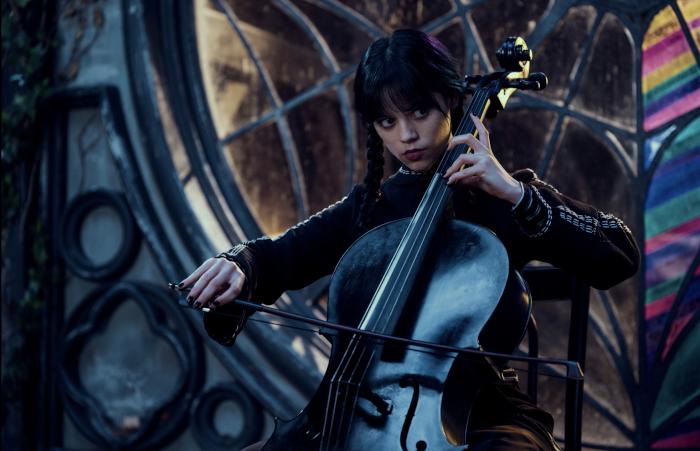 Wednesday is Netflix’s latest contribution to the gritty-teen-drama-IP adaptation-genre. Based on the Addams Family characters created by Charles Addams, the series follows a 16-year-old Wednesday Addams (Jenna Ortega; Scream (2022), X (2022), Jane the Virgin (2014-19)) as she navigates a new boarding school, her family, developing psychic powers, local politics, intergenerational trauma, boys, friendship, prejudice, secret societies, and colonialism. If you think that sounds like a lot of ground to cover for an eight-episode teen drama, you’re right. The fatal flaw of Wednesday, however, isn’t that it tries (and fails) to cover too much ground. Rather, it falls apart thanks to a fundamental misunderstanding, likely thanks to the show’s creators, of what “The Addams Family,” and its creepy/kooky members, represent.

At a boarding school for magical, mystical, and otherwise strange teens, Wednesday witnesses a monster attack that forces her to question her family, her school, the nearby town, and systems of power that prioritize preservation over the truth. Although we learn early on that Wednesday is (among myriad high-achieving interests) writing a detective novel, the show quickly thrusts her into the role of real-life detective. At times Wednesday partners up with the town sheriff, the boarding school headmistress, and various other students. The moral distinctions are never quite clear, making the stakes of the show (and the fate of various Addams Family members) murky at best.

The ever-resilient never-conformist Addams Family—especially the Wednesday (Christina Ricci)—of my childhood (Sonnenfeld version) is fundamentally incompatible with the good/evil binary all but presupposed by the structure of a detective drama. The Addams Family of my childhood, led by an impeccably lit Morticia Addams (Anjelica Huston), would know that monsters are just strangers waiting to become part of the extended Addams-clan.

Jenna Ortega does an excellent job as Wednesday and, frankly, brings more Tim Burton to the show than the director himself. In fact, there are only a handful of scenes and set pieces that feel remotely more like Tim Burton than an episode of Riverdale. Even then, many of the best beats are by virtue of Ortega rather than once notoriously ghoulish Burtonian direction. When she experiences a psychic vision, for instance, Ortega contorts herself to a harsh eighty-degree backbend, maintaining eye contact with the camera as it pans above her. Ortega’s interpretation of the vampy moves Wednesday would bust out at a school dance are probably the highlight of the season (Callback alert: They are very Mamushka-esque). Although the series “big bad” is a textbook Burton character, Burton fails to meaningfully put his mark on the beloved, and at this point much-adapted, Addams Family. After the first four episodes, Burton hands off direction to Gandja Monteiro (Episodes 5-6) and James Marshall (Episodes 7-8).

The problem with Wednesday wasn’t necessarily directorial. It likely stemmed from series creators Alfred Gough and Miles Millar, the writing/show running partnership behind more than a decade of Smallville (2001-2017), Spiderman 2 (2004), and The Mummy: Tomb of the Dragon Emperor (2008). The pair are no strangers to adapting IP with teen audiences in mind (Smallville was a young-Superman CW drama). However, Wednesday, given the “kooky” and often anti-authoritarian themes of the Addams Family, fails to represent the nature of its source material.

Wednesday is not sly about knocking off the Harry Potter wizard/muggle distinction (“outcast” versus “normie”). In the first episode, during a tour of the obvious Hogwarts stand-in (“Nevermore Academy”), Wednesday’s new roommate (Emma Myers) chipperly explains the boarding school’s demographics: “Outcasts, freaks, monsters—fill in your favorite marginalized group here.” She goes on to Mean Girls-style describe the different cliques and hierarchies that dictate Nevermore’s social norms…for a school catering to outcasts, it sounds very “normie”.

There are problems with the series from top to bottom; however, the most egregious is hardly re-rehashing high school social dynamics. Rather, in an ill-fated attempt to retcon “outcasts” as longtime victims of “normie” abuse, the series claims that Indigenous tribes of New England and “outcasts” existed together in harmony before English colonizers arrived. According to the series’ lore, a group of Addams were among those who coexisted peacefully with Indigenous people after immigrating from Mexico. The Wednesday Addams stand-in from 1625, it should be noted, was white and blonde.

I don’t mean to gloss over the glaring historic revisions and wannabe woke metaphors, both of which there are many—at one point, Wednesday’s werewolf roommate, Enid (Emma Myers), is approached by her parents to attend a werewolf conversion camp. However, Wednesday seems more concerned with turning the gif version of Christina Ricci’s Wednesday into a witty and cynical television-teen than thoughtfully interrogating what life as a teenage Addams might look like. For instance: What would boundary pushing in the Addams mansion look like? Would Morticia and Gomez’s characteristic radical acceptance grow tiresome for a broody child turned teen? Or, What is the line between spooky and evil, and does that matter?

All around the Netflix Addams clan pales in comparison to their black and white sitcom and Sonnenfeld counterparts. Luis Guzmán and Catherine Zeta-Jones make valiant efforts as the new Morticia and Gomez Addams, but don’t have enough screen time to solidify their characters’ infamous chemistry. Fred Armisen makes a goofy yet charming single episode turn as Uncle Fester, and the role of Thing is promoted from man’s best friend stand-in to one of Wednesday’s actual best friends, providing for the series’ most compelling show of character growth. Interestingly, Christina Ricci steps back into the world-of-Addams to play Marilyn Thornhill, a teacher of botanical sciences, dorm mom, and the only “normie” educator at Nevermore Academy.

Unfortunately I was under the impression this iteration of the Addams was going to highlight Wednesday as an angsty Latina. There are several moments where it is clear that Wednesday has more than a cursory understanding of her Latin heritage; however most of those moments become head-scratchers when you consider that (according to the lore of the series) the Addams clan immigrated before New England was colonized. Although it is wholly possible the Addams were native, the series fails to explain it in a meaningful way, especially considering that the 17th-century version of Wednesday Addams was, it bears repeating, white and blonde (with a vaguely Spanish accent). If you are interested in seeing contemporary high-concept Latinx-Horror representation, I instead point you towards a different Fred Armisen project, Los Espookys. You will not be disappointed.

I love The Addams Family and even celebrated Wednesday’s premier (November 23) with an Addams Family double feature. Wednesday, unfortunately, fails to even locate the itch that Sonnenfeld’s two movies so deliciously scratch. Although I think it would have helped to feature more of the family and less of the Edgar Allen Poe-themed boarding school and pilgrim-obsessed town, the show delivers a moderately satisfying mystery with room for a second season.

Wednesday is available to stream on Netflix


← Beth Needs To Get Over Her Hatred of Jamie on 'Yellowstone' | Danny Masterson's Lawyers Got What They Wanted: A Mistrial →


Image sources (in order of posting): Netflix, Netflix
Most Viewed