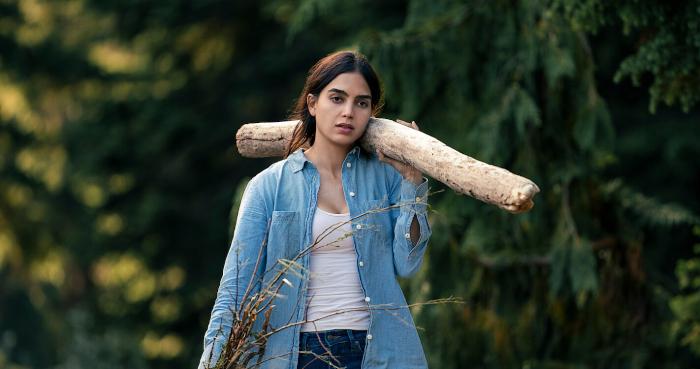 Though I am as guilty of it as anyone, attributing all of Netflix’s mediocrity to the algorithm can be condescending. It takes agency away from the creators behind these shows who are given paychecks in exchange for the limitations of those algorithms, a complete lack of transparency, no residuals, and writers’ rooms that are shut down as soon as shooting begins. How do you make magic while working within those parameters?

Creators Martin Gero and Brendan Gall don’t make much magic with the survivalist series Keep Breathing, but it is highly watchable, occasionally intense, and 60-65 percent entertaining. In fact, while watching Keep Breathing — during one of the listless flashback sequences — I found myself contemplating the purpose of this review. Aside from providing a space to comment or reflect on a series that our readers have already seen, what is the point of reviewing a series like Keep Breathing?

If have unlimited time and need a series to keep you occupied, Keep Breathing fits that bill! It’s an easy and largely satisfying binge — 6 episodes of 30-40 minutes apiece, not that much longer than a modern superhero film. It’s a Lost-like knock-off about a woman named Liv (Melissa Barrera, In the Heights, Scream) whose small plane crashes in the middle of the Canadian wilderness. After the death of the two pilots — who are, unbeknownst to her, transporting cash and drugs — Liv is left stranded with only a few items she’s able to pull out of the underwater wreckage. So, she MacGyvers some shit and endeavors to escape or be rescued before she’s swallowed into the wilderness.

If you’re a fan of Cast Away or Alone (a big hit on Netflix, which I’m sure contributed to the decision to greenlight Keep Breathing), the survivalist portion of the film is genuinely enjoyable. Unfortunately, per the rules of the Lost knock-off, the series also traffics in flashbacks, which see Liv grappling with her mother’s decision to leave her, the grief she feels over her father’s death, and the abandonment issues she has with her French boyfriend. If the series had been four episodes instead of six and excised all the flashbacks, I genuinely would have enjoyed it. Alas, in the streaming era, no good trauma goes unprocessed, which means the exhilarating survivalist drama is interrupted by clunky flashback scenes with flat characters, deathbed tropes, and achingly predictable storylines that not even Barrerra’s considerable talents can salvage.

Still, as a time killer, Keep Breathing is more than serviceable and scratches many of the same itches we get from watching Alone: Devastating setbacks, thrilling small victories. It’s decent competence porn. However, if your time is limited, and you seek out reviews as a way to prioritize your television viewing, Keep Breathing would fall low on that list of priorities unless Netflix is the only streaming service to which you subscribe, in which case Keep Breathing would probably fall into the middle-upper half of Netflix originals, one step higher than mediocre. There’s your pull quote, Netflix: “Slightly better than average!”