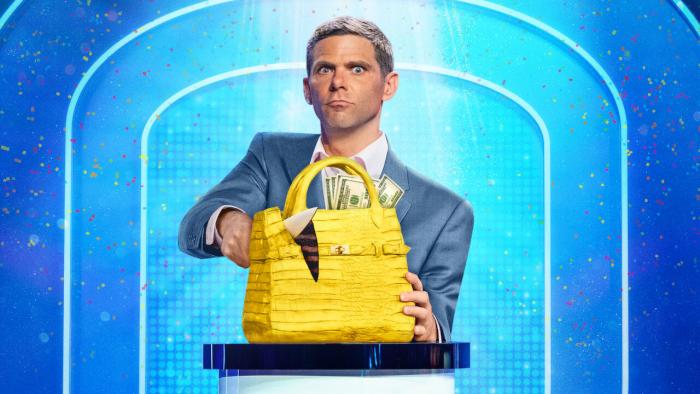 Netflix's 'Is It Cake?' Is An Appallingly Bad Game Show

Netflix’s short history of game shows has all seemed to rely on simple, high-concept premises and audiences who eat a lot of edibles. Take Awake, for instance, in which contestants are asked to perform a number of tasks after 24 hours of sleep deprivation. There is also The Floor is Lava in which adult contestants play a children’s game (not to be confused with Squid Game). There is also Flinch, where contestants have to endure flinch-worthy feats — like allowing a rat to crawl around in a cage with their faces — without flinching. Idiocracy is alive and well.

The latest is Is It Cake?, which is based on an Internet trend that was vaguely amusing for a short period of time when it involved 20-second TikToks. Is It Cake?, meanwhile, is a 38-minute game show that completely exhausts its premise within the first 20 seconds.

Mikey Day — “one of the white guys from SNL” — is the host of the game show for reasons that don’t make a lot of sense to me (did Lorne approve of this, Mikey? What are you doing? This is a gig you take 10 years after you leave SNL when everything else has dried up). It’s eight episodes that involve a limited number of contestants who have to play more than once because cakes-that-look-like-real-objects is a very niche profession and, if you don’t mind me saying so, involves a lot of eccentric personalities that you wouldn’t want to be trapped talking to at a party.

The first round of the game show asks three contestants to identify which of a series of otherwise normal, everyday items is actually cake. Whoever does the best in this round is able to choose first which of the otherwise, normal everyday items that they would like to duplicate as a cake.

In the next round, the bakers are asked to create the items. They are given eight hours. EIGHT HOURS. That means that viewers are subjected to a 10-15 minute montage that condenses eight hours of baking and decorating. This is the part you fast-forward through.

Once the cakes are created, three judges comprised of social-media influencers, food writers, and/or Finesse Mitchell from Saturday Night Live, are asked to choose which among five items is the cake. If the judges fail to identify the cake, the contestant moves on to the next round. From among the contestants remaining, the judges choose a winner based on the taste of the cake and the artistic merit. The winner receives $5,000 and an opportunity to win another $5,000 in the final round, where one contestant has to choose which is the cake between only two items (if the contestant loses, the $5,000 rolls over into the next episode).

That’s it. That’s the show. And it might have been watchable, but barely, if they’d limited each episode to 20 minutes or so, reconfigured the format completely, and spared Mikey Day from this humiliation, but at nearly 40 minutes an episode, Is It Cake? is both awful and interminable. Again, it’s the evil of the Netflix algorithm, which favors more viewing hours and works against the baked viewer at home, who doesn’t ask for much beyond a chill hang and a few minor dopamine hits. Alas, Is It Cake? can’t offer even that.