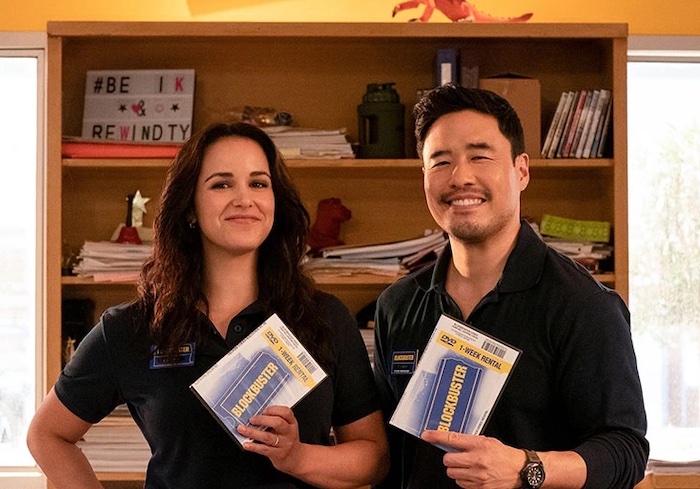 Netflix's 'Blockbuster' Is Pleasant But Dull

There’s nothing wrong with Netflix’s sitcom Blockbuster. There’s nothing spectacularly right about it either. It’s there, floating around in the algorithm, waiting for someone to stumble across it and say, “Oh, I like these actors; let’s watch this.” It lulls you into such a comfortable state of oblivion, with its toothless jokes and rote storylines, that you forget it’s even on.

That’s how I ended up watching the entire season of Blockbuster in one day.

Creator Vanessa Ramos (Brooklyn Nine-Nine, Kenan) has put together a reliable cast, anchored by Randall Park (Fresh Off The Boat, WandaVision) and Melissa Fumero (Brooklyn Nine-Nine). Even they can’t elevate the script beyond middling. The point it’s trying to make about how disconnected we have become as a society feels at least five years too late. The irony of framing Blockbuster as a Mom n’ Pop shop being put out of business by the internet is not lost on me — someone old enough to remember when Blockbuster put all of the Mom n’ Pop video stores out of business. Yes, this Very Last Blockbuster In The World is a franchise location owned by Park’s bumbling boss character, Timmy. But even in the speech he gives about faceless corporations destroying local business, he conveniently skips over Blockbuster’s role in that.

Melissa Fumero plays Eliza, who resents being forced back into her old, high school job at Blockbuster after experiencing setbacks in her life and marriage. Eliza and Timmy play the standard “will they/won’t they” game throughout — complete with the requisite plot devices around dating other people, getting Eliza’s marriage back on track, and her interviewing for another job. There’s no new ground being tread here.

The supporting cast is fun. Olga Merediz (In The Heights, Encanto) has some good moments as the out of touch Boomer, where she gets to lean into the silliness of some of the situational humor. Madeleine Arthur plays ditzy Hannah with more enthusiasm than she displayed in Devil In Ohio. J.B. Smooth plays Timmy’s best friend since high school, and fellow small-business owner, Percy as … well, as J.B. Smooth. That isn’t a bad thing! The cast of regulars is rounded out by Kamaia Fairburn, Percy’s somewhat estranged so-hip-it-hurts teen daughter, and Tyler Alvarez, who plays aspiring filmmaker, Carlos.

I would classify the whole season of Blockbuster as “Mostly Harmless” because there are worse ways to spend your TeeVee watching time. I enjoyed the diversity of the cast and the stories they were trying to tell. I am An Old and still reveling in every move we make away from white-dude narratives. If you’re looking for some comedy comfort food that will wash over you and then be gone from your mind, this fits the bill. While it won’t change the television landscape, there are some laughs to be had and nobody involved is particularly objectionable. That goes a long way these days.


← Casey Anthony Is Ready to Talk, But She Doesn't Look Happy About It | Let's Talk About The 'Recast T'Challa' Hashtag For 'Black Panther: Wakanda Forever' →