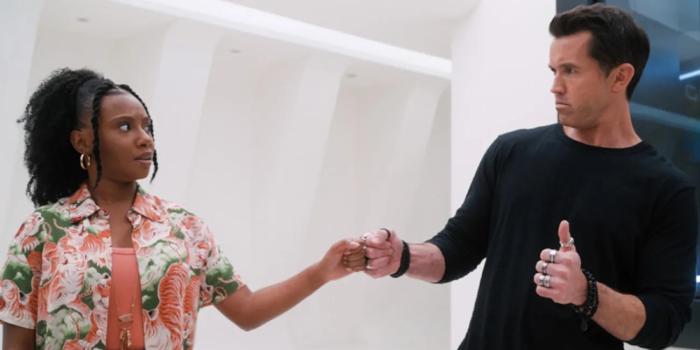 The Mythic Quest offices are open and back in action as the show’s third season kicks off with a strong start. Despite in-narrative changing circumstances, prison sentences, promotions, and departures, the core cast of this ensemble show keeps going strong.

David (David Hornsby) now helplessly in charge of the company and finding himself with next to nothing to do, anxiously treads water. His assistant Jo (Jessie Ennis) remains a holy terror of anti-“woke” ideology and absolutely zero empathy. Carol from HR (Naomi Ekperigin) tries to keep the dysfunctional ship upright. The conniving Brad (Danny Pudi, having a great time as always) returns from his stint in jail to return as … Mythic Quest’s janitor. Ex-testers and now-girlfriends Rachel (Ashly Burch) and Dana (Imani Hakim) hang around the offices, while Sue (Caitlin McGee) emerges briefly from her basement moderation chamber. Derek Waters returns as the continually browbeaten artistic lead Phil, replacing his Drunk History exuberance for a hilariously morose character.

The only exception is C.W. (F. Murray Abraham), to whom the series bids a touching farewell in its first episode of the new season. I won’t spoil that.

Meanwhile, our series leads, Ian (Rob McElhenney, also the show creator and frequent director) and Poppy (Charlotte Nicdao), have relocated downstairs from the Mythic Quest offices to their new ultra-minimalist lair of Grimpop, where as creative partners they butt heads, lifestyles, philosophies, and egos in the process of creating their new masterpiece game, Hera.

Mythic Quest’s human remains sharp, open-hearted, and heartfelt. In its stew of deeply flawed characters, the show finds a balance between making its jibes and maintaining a level of humanity. That balance, for me at least, has translated over the first two seasons into emotional investment and plenty of laughs.

Season three keeps the trend going with a mix of ridiculous set-up scenarios (the Grimpop office is so minimalist there are no lines or markings on the wall, leading David to become trapped there after being unable to summon the elevator to escape) and genuine emotional uplifts (Jo takes Poppy and Rachel to a car-crushing, tank-driving arena, giving them back a sense of power while Jo tentatively begins to believe she really has friends).

Ian as a character lampooning the tech-bro fantasy narratives about crypto, the metaverse, and “web four” continues to be a timely and irritating punchline. He seems harmless compared to his noisy real-world counterparts—like the looming behemoth of an egotist who just purchased Twitter and says things like “vox populi, vox dei” without any apparent irony or critical thinking (or even the time to Google the full quote). But I digress.

Ian remains a comfortable source of humor and mockery because he’s so obviously ridiculous. He recites hollow Elizabeth Holmes sales pitches with sincerity (and we recently saw how that one turned out). He idolizes people based on how much money they’ve made, without worrying about how that money was made. In the real world, Ian would likely be a deeply unlikeable Musk-like figure. But in Mythic Quest, he remains an essentially good and kind person, though deeply misguided, out of touch, and self-centered, which keeps him nebulously on the side of the sympathetic. Everyone can be assholes to each other, but even the heartless Satan-esque folks (Jo, for one) get to have their moments of heart and connection.