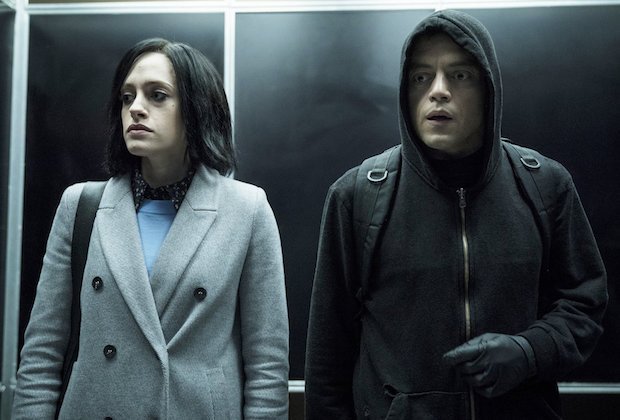 'Mr. Robot' Recap: Sam Esmail Delivers a Gimmick Episode, but It's a Hell of a Good One

This week’s episode of Mr. Robot, “Method Not Allowed,” is set on Christmas Day and contains only two lines of dialogue. The first, in the episode’s opening scene, sees Darlene pick Elliot up in her stolen car soon after he sets fire to the van containing the Dark Army agent that shot and (presumably) killed Tyrone Wellick. “It’s cool, dude. We don’t have to talk,” Darlene says to Elliot as they drive away from the burning wreckage. They don’t speak again for the entirety of the episode. In fact, no one else speaks, either, until the final moment of the episode when Elliot’s former drug dealer, Vera, says to Elliot’s former therapist, Krista, “OK. It’s time we talk.”

What happens between those two lines of dialogue is one of the most thrilling episodes of the series, in spite of its silence. Elliot and Darlene must break into a server farm and crack into Cypress National, the bank used by Whiterose (Cypress National is basically this season’s MacGuffin). To do so, they must quietly navigate by and around security guards, who end up walking around the server farm like ghosts in a game of Pac-Man. While they successfully manage to evade guards long enough to perform the necessary hack, they’re spotted and the cops arrive before they can exit. Elliot takes off and runs past the cops, while Darlene stays behind, poses as a member of the building’s gym, and walks out unnoticed.

The most thrilling and intense sequence in the episode sees Elliot on foot running away from cops, down NYC streets, through Central Park, and across the ice skating rink before running face-first into a car. Elliot manages to get up before the cops arrive. He leaps over a wall in a moment that echoes the one in which we saw Mr. Robot push Elliot off a railing. After violently rolling down a hill, Elliot finds Darlene waiting in her car to pick him up. After a heart-racing run and several near-death experiences, Elliot is so relieved to see Darlene that he actually places his hand over hers, exhibiting physical affection toward his sister for the first time that I can remember on this series.

Price and Dom, meanwhile, have their own silent storylines, although Esmail uses texting several times to work around the lack of dialogue. Both Price and Dom are awaiting instructions from the Dark Army, Price to find out when his resignation meeting with the Deus Group will be held, and Dom on details of her next mission. Both are otherwise quiet for different reasons as they go about their day: Phillip Price because it’s lonely at the tippy top, especially now that he’s alienated himself from other members of the Deus Group. Dom, meanwhile, has nothing to say to anyone — even her own mother — because she’s so miserable and stuck in her own head. By episode’s end, however, she gets instructions from the Dark Army to locate a couple of troublemakers. 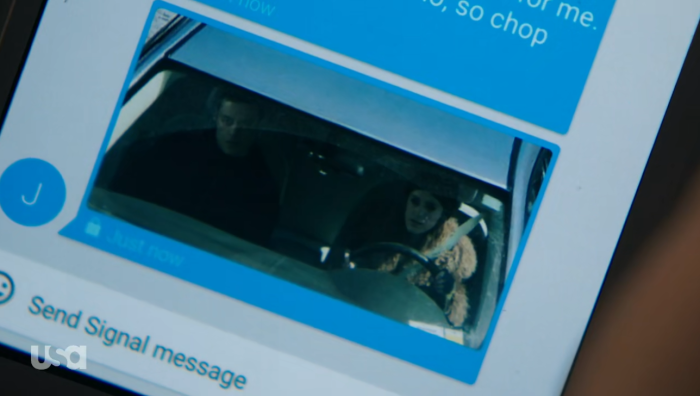 As we see in the promo for next week’s episode, Dom finds at least Darlene.

— Krista, Elliot’s former therapist, goes about her day, too, texting with her boyfriend and preparing for Christmas night. However, she’s accosted by Vera at the end of the episode. He plans to use Krista to leverage Elliot into working for him. Vera remains a wildcard.

— The name on Darlene’s fake ID? Dolores Haze, the real name of the Lolita, which is a frequent reference on Mr. Robot.

— So, when Elliot doesn’t speak, Mr. Robot does not appear. He makes no appearance in this episode, which I suppose says a lot about how Elliot uses that alter to communicate with others.