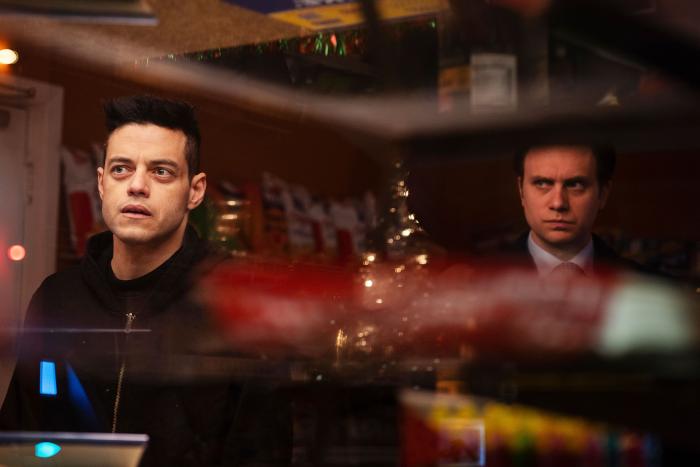 Given the nearly two-year break between seasons, I appreciate that Sam Esmail streamlined and simplified this final season, essentially boiling it down to one storyline: Killing Whiterose to avenge Angela’s death. That mission requires hacking into Cypress National Bank — which is where Darlene gets stuck in this week’s episode — but Elliot also gets sidetracked after Wellick kills (or tries to kill) a Dark Army agent, and they have to dispose of his body.

Notwithstanding Dom’s extended dream sequence, it seems like a fairly straightforward episode, but I don’t trust anything I saw in “404 Not Found.” Historically, Elliot has been too unreliable a narrator to trust storylines in which he is involved, and in this one, Wellick (presumably) dies in the end. But did he? Was the glow in the end Wellick walking into the light? Was it the glow of the terminal? Or was that a literal light, a purple-ish glow that Wellick finds in the middle of the woods that somehow prevents him from dying of a bullet wound?

Or maybe Wellick was never there in the first place? Maybe it was all another dream? Or maybe Wellick has been dead all along? Ultimately, that’s my issue with Mr. Robot: I just don’t trust it.

But let’s take the episode at face value. Here are the Cliffs Notes: After trying to get off to interrogation footage of Darlene, Dom falls asleep in the midst of a sex chat with HappyHardonHenry806 (another nod to Christian Slater’s Happy Hard-On Harry in Pump up the Volume). We don’t realize it’s a dream until later, but HappyHardOnHenry reveals herself to be a woman, and ostensibly comes over to fuck Dom but ends up trying to drown her in the bathtub, telling her to stop fighting and “realize you’ll never be free” before Dom wakes up from the dream. She’s feeling the pressure of the Dark Army, plus she’s very horny and clearly has a thing for Darlene.

Meanwhile, Darlene is trying to find her brother Elliot to let him know that she’s hit a roadblock in her attempt to hack into Cypress National bank. Elliot, however, is nowhere to be found. A spiraling Darlene tracks Elliot’s GPS coordinates on his phone and offers to hotwire the car of a drunken Santa who has lost his keys and give him a ride back to his home in exchange for the use of his car (we later learn that the car is not actually his, either; it just looks like it). Tobias, the Drunk Santa played by Jon Glaser, confides in Darlene, and Darlene gets the wrong idea that Tobias wants to end his life. In the end, it turns out, Darlene is the one who is depressed, but Tobias offers to be her sounding board as she rails about how everyone in her life is gone except her brother, who is a dick, but she’s still afraid that he’s about to die, too. 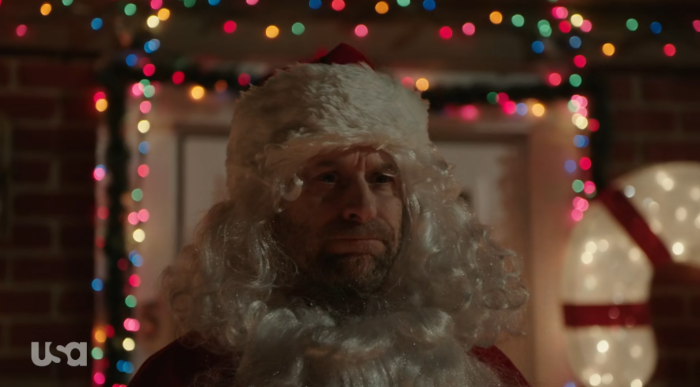 Elliot is not dead. Yet. After spotting the surveillance van in last week’s episode, he and Wellick go out to the van and Wellick hits the guy in the head and kills him, so he thinks. They take the van out into the Upstate Bumfuck to ditch the body and torch the van, but while inside paying for gas, the Dark Army agent apparently recovers and disappears with the van. There’s no Internet service, so the gas station attendant directs Elliot and Mr. Wellick to a shortcut through the woods.

Over the course of their hike, Wellick and Elliot blow up at one another before ultimately coming to an uncomfortable truce: Elliot won’t admit to caring about Wellick, but he will express an appreciation to Wellick for being one of the few people left alive who actually cares about him. It almost feels like there’s closure before Elliot spots the van, which has crashed into the side of the road after having swerved to avoid a deer. Elliot and Wellick approach it from different angles and find the Dark Army agent inside. He unloads his gun, and Wellick gets a bullet into the stomach. Wellick insists that Elliot leave him to die, but Elliot is reluctant to do so. Wellick says he’s just going to take a walk. He stumbled into the woods, sees a glowing light and … dies (Maybe).

This is an Instagram message from Martin Wallstrom 13 weeks ago.

It’s the same tie he was wearing in this episode. 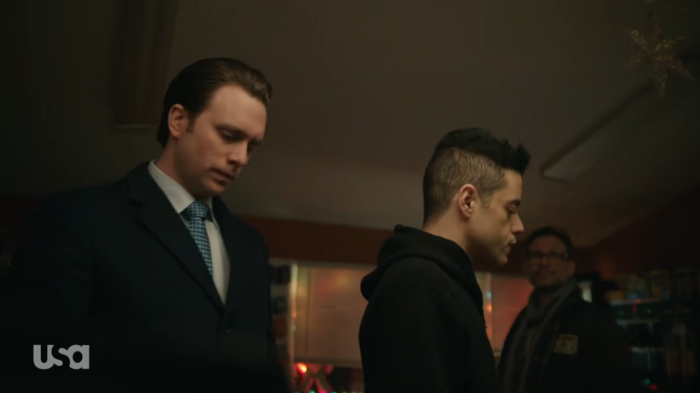 ← Review: Apple TV+'s 'Dickinson' Gives Poet Emily Dickinson The 'My So-Called Life' Treatment | Meghan McCain to Cory Booker: 'My Brother Will Shoot You If You Try to Take His Guns' →