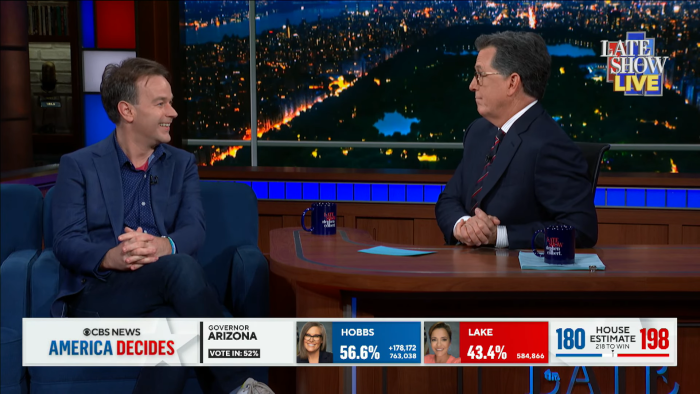 Mike Birbiglia Thought Someone Was Catfishing Him As Taylor Swift

Hey, you! Yes, you. Things aren’t as bad as they could be right now, but you’re probably still in the mood for a nice distraction. Well, have I got the anecdote for you! Mike Birbiglia appeared on a live episode of the Late Show with Stephen Colbert last night (don’t ask why it was live). In his chat with Mr. Colbert, Mike was asked about his recent job as an actor in a Taylor Swift music video. The gig came about in a pretty fun way. Just ignore the chyron at the bottom of the screen!

Birbiglia had a chance meeting with Swift through mutual friend Jack Antonoff (celebrities, so like us). She was in the middle of scripting one of her new music videos that day and thought Birbigs would be a perfect fit. So, she did what any normal famous person would do. She texted him from a number Birbiglia did not have, claiming to be Taylor Swift. Naturally, Mike assumed this was some sort of prank.

He would come to learn that it was, in fact, the real Taylor Swift. So, one of the most unhip guys in comedy ended up in a video for one of the biggest pop stars on the planet. It’s something most people would not have assumed would happen. Like, for instance, Democrats holding onto the Senate despite projections of a red wave this fall. Dammit! I’m sorry, I tried. At least the thing I just mentioned is a good thing!

The whole interview with Birbiglia is delightful (no surprise there); helped in no small part by the fact that he clearly loves being in front of a crowd. If you need eight minutes to think about something else today, you’ll be hard-pressed to find a better choice.


← 'Blockbuster,' 'Inside Man,' 'Quantum Leap,' And More As Podjiba Returns! | The Red Waves Bye Bye as Democrats Stomp the Face of Political Gravity →