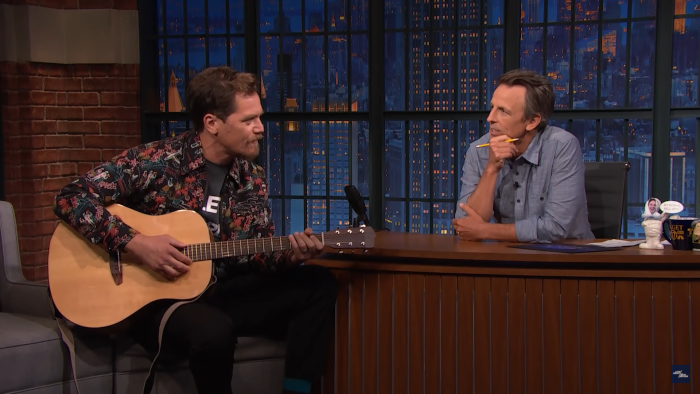 I watch a lot of late-night interviews. Not just for this website but in general. There has always been a love of the late-night scene in my bones. It started with a love of sketches and weirdness (thank you, Conan). Eventually, I would find myself falling in love with the interviews, the good, the bad, and the awkward. Most of them are awkward, yet now and then someone will shine through. Today, that person is Michael Shannon.

There’s a reason most of the interviews are awkward. They tend to be stilted. Some people are just bad at them. Then there are the notorious pre-interviews. Before someone is a guest on a late-night talk show, they have a pre-interview phone call with one of the producers. The point is to make sure that the host isn’t struggling to find something to talk about with their guest. The host then knows what to ask and their guest knows what to say because they’ve already said it.

This is why you will often see celebrities tell the same story on several shows. They’ve got their story or anecdote and they’re sticking to it, either because they don’t have much to say or they’d rather not come up with something new. Ironically enough, this process can make the interviews more awkward. They rarely feel like organic discussions and instead feel like two people checking off boxes. Some interviewers are good at throwing a few curveballs. Some interviewees are good at feeling more natural. One of those people is Michael Shannon.

Shannon was recently a guest on Late Night with Seth Meyers. I’ve seen some interviews with him before, but never really clocked just how sincere and delightful he is. You can tell there are things he and Seth planned to talk about in advance. A koala sighting, for instance, Michael Shannon’s band. It’s clear that they had things picked in advance, but Shannon makes it feel effortless. Even when he is “surprised” with a guitar, he makes it feel natural and funny. Oh yeah, Michael Shannon sings a song in this interview. It’s a song about armadillos.

So please, celebrities (I know you’re reading this) take a few cues from Michael Shannon.

By that I mean give me more songs about armadillos.

I’m lookin’ at you, Joseph Gordon-Levitt! (JK, you’re delightful too.)

← What Does Roy Kent Look Like When He Smiles, Plus How Tall is Hannah Waddingham? | This Week On Podjiba: 'Nine Perfect Strangers', 'The Chair', 'The Walking Dead', And More! →