Mia Farrow’s Fear is the Most Revealing Part of ‘Allen v. Farrow’

I can understand if you haven’t felt up to watching Allen v. Farrow. It’s been a hard year. Maybe you think you know this already. Maybe you read Dylan Farrow’s 2014 open letter published on a New York Times blog, which ran after the Golden Globes awarded Allen the Cecil B. DeMille Award and Diane Keaton accepted in his honor and people like Emma Stone, one of many A-listers who continued to work with Allen in the past 30 or so years since 7-year-old Dylan said her father molested her, got onstage to call the filmmaker a genius. (You can’t find the full segment, which included both Keaton’s speech and the tribute segment, online anymore, although the documentary uses it. It’s been pulled from YouTube. All I could find was Diane’s isolated speech.)

It’s funny now to read how this was covered back then. Not even a decade ago! This was the night Ronan Farrow, already a respected journalist at that point, tweeted in support of Dylan “Missed the Woody Allen tribute - did they put the part where a woman publicly confirmed he molested her at age 7 before or after Annie Hall?” The Hollywood Reporter buried the tweet at the end of their story. CBS News described Farrow’s tweet about not watching that portion of the ceremony by saying, “she discovered the director was having an affair with her adopted daughter from another marriage, Soon-Yi Previn, now Allen’s wife”—no mention that Soon-Yi was a teenager who saw Allen as a father figure when the affair started, and no direct mention of Dylan’s accusations. TMZ, the only place I can find video of Keaton’s speech, mentioned Ronan’s tweet, saying of Allen, “he allegedly fondled his 7-year-old adopted daughter.” So much distance in all this coverage, right? So much doubt.

But Allen v. Farrow, from filmmakers Kirby Dick & Amy Ziering and Amy Herdy, doesn’t leave much room for doubt. If you think you can watch it, do. Interviews with Mia, Dylan, Ronan, some of Mia Farrow’s other children, including Kaeli-Sha Farrow and Fletcher Previn, friends, prosecutors, lawyers, and even goddamn Carly Simon paint a pretty compelling and convincing picture. Something happened in that attic. That something was an incestuous act of sexual assault. Dylan has always been consistent in her story. Connecticut authorities believed there was enough probable cause to bring charges against Allen, but didn’t because they didn’t want to retraumatize Dylan. A very long custody battle dragged on afterward. And Allen has controlled the narrative in all the decades since. He painted Mia Farrow as a jilted partner, scorned woman, and unfit mother. He used Soon-Yi and their relationship—already so inappropriate—as a shield. He was, and still is, rich and powerful. Ronan talks about Woody offering to pay for his college if he discredited Dylan. Mia plainly says that Woody told her she would never work in Hollywood again, and lo and behold, she had to start working abroad after all this because no one would cast her. And no one in the industry seemed to care as long as Allen was making them money.

It’s sort of amazing what gets accepted over time. Look at all the A-listers smiling at Keaton’s praise for Allen in that video, in particular those who worked with him: Julia Roberts, who was in 1996’s Everyone Says I Love You, and Cate Blanchett, who won her Best Actress Oscar for Blue Jasmine and called Dylan’s accusations a “family matter.” You know all the young names who worked with him recently, too: Selena Gomez, Elle Fanning, Miley Cyrus, Timothée Chalamet. Yes, some of them then expressed remorse and donated their salary from his films to charity. Yes, it finally seems like Allen’s “I hide in plain sight by making movies about a young woman and an old man, always played by me, falling in love, and that’s my goofy, self-deprecating schtick” is finally catching up with him businesswise. But what Allen v. Farrow lays out so clearly—in a way that will sickeningly remind you of the feature film The Assistant (not nominated for any Oscars this year, how coincidental!), which showed us how the industry let Harvey Weinstein slide for so long—is how methodical this all was. How long it went on. How Allen remained untouchable in this industry. And how much pain it caused Mia, Dylan, Ronan (who was instrumental in breaking the Weinstein story wide open), and the Farrow family.

There are a lot of questions raised by this documentary that I’m not smart enough or articulate enough or well-versed enough to navigate or explore. There are very good pieces out there, in particular, about Mia’s adoption practices, and about her relationships with her non-white children. Those are worth finding and reading, but again: I have not seen any of those pieces also say, “And oh yeah, Mia and Dylan are clearly lying.” Two things can be true at the same time, which is that Mia’s approach to growing her family might not have been great, and Woody being a sexual predator is also obviously not fucking great. They don’t cancel each other out. These are not the same kind of problematic.

I’ve complained and preached enough, I guess, so let me get back to my original point. This is the moment that will haunt me from Allen v. Farrow, and I do not mean to discredit or diminish Dylan in any way by making this moment about Mia instead of her. I am not saying that Mia’s pain is more than Dylan’s. This isn’t a contest. But what I am trying to convey, and hopefully I do, is how sadly recognizable this moment was for me as someone who has been around and experienced domestic abuse. (As I’m sure Dylan’s experience is recognizable and relatable to anyone who has survived sexual abuse or incest.) The Mia moment is about dread. This is about the feeling of someone you believed in and loved making you terrified, and if you’re a woman, statistically, the person causing that is most often a man. 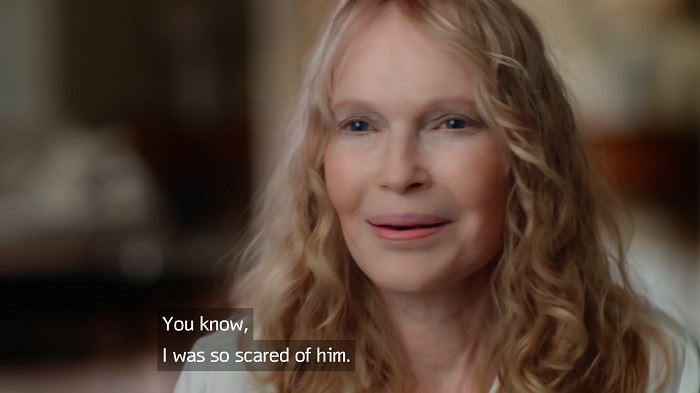 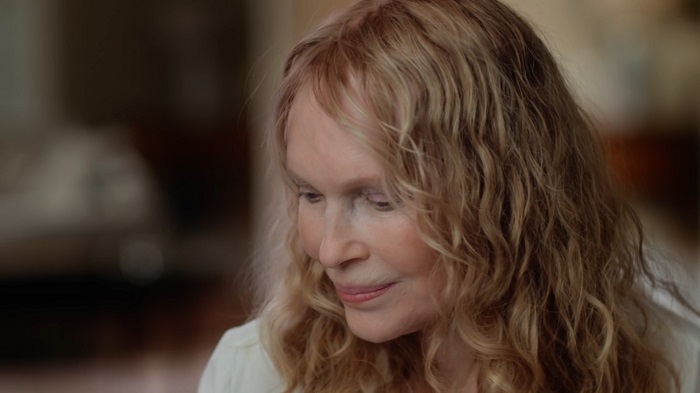 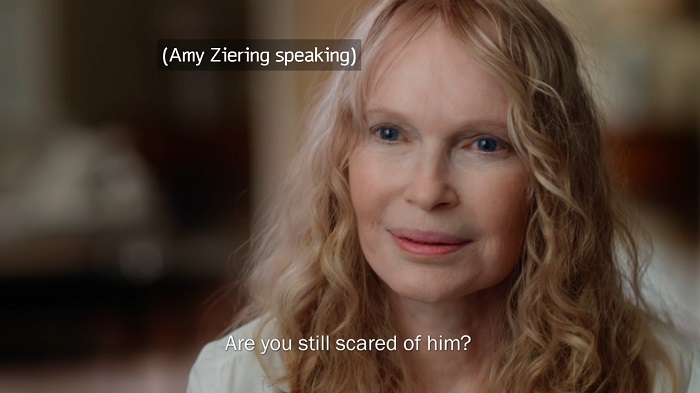 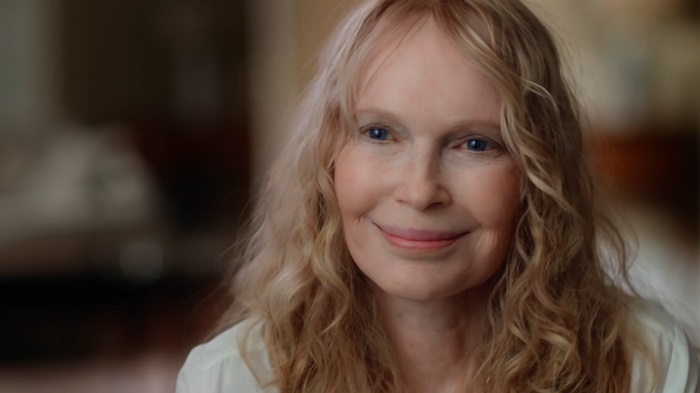 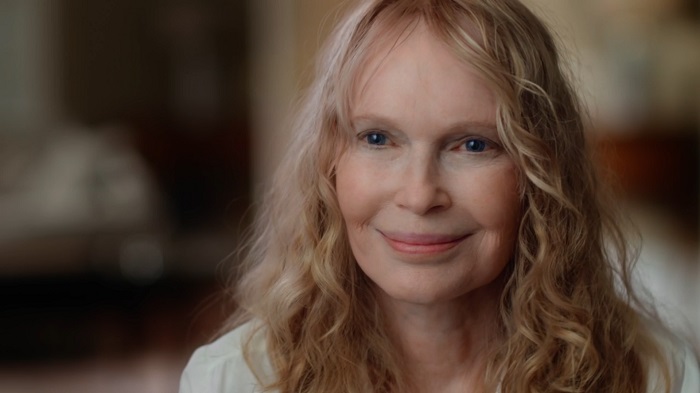 It’s Farrow looking away from the camera. It’s her nod when Ziering asks if she’s still scared of Allen. It’s the shrug. It’s that slight glassiness to her eyes, like she’s said this exact same thing a hundred times, and sometimes it still surprises her, even if she thinks she’s made her peace with it. It’s the realization that the vulnerability and fragility and honesty and intimacy you shared with a person is totally gone now, and the person you trusted most in the world to honor that, instead destroyed it. It’s fear. I’m not sure how you could see Farrow in this moment and not believe her story. I’m not sure how you could see Farrow this raw and this bare and this resigned, and instead, choose to believe Allen.

All four episodes of the documentary series Allen v. Farrow are streaming on HBO Max.

← 'That Scene in a Christopher Nolan Film When You Give Up Trying to Follow the Story' | The Alternative 2021 Oscar Nominations, Made Up Entirely of Snubs and Omissions! →