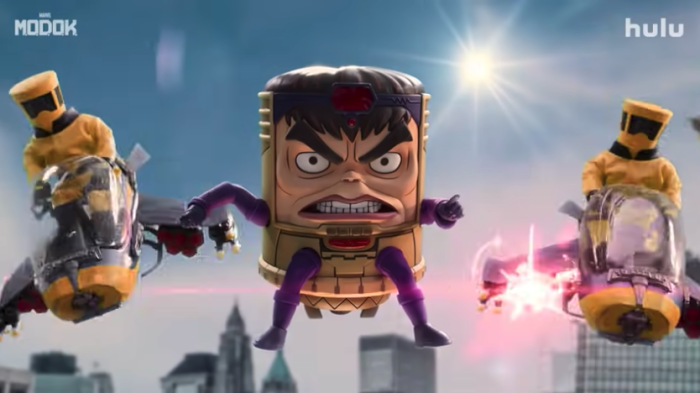 May Streaming Guide: The 19 Must-See Movies And TV Shows

Spring is in the air, vaccines are getting into arms — yet despite all the very good reasons we have for going out, the streamers are offering up some pretty compelling excuses to stay on our couches this month. And no, I’m not just talking about Marvel’s M.O.D.O.K. (though personally, yes I am absolutely almost exclusively talking about Marvel’s M.O.D.O.K., duh, it’s STOP MOTION ANIMATED Y’ALL).

Tenet: Did you skip seeing Christopher Nolan’s latest mind-bender in theaters during a pandemic? Yeah, me too. Anyway, our patience has finally paid off because now it’s available on HBO Max.

Star Wars: The Bad Batch: Launching on May The Fourth (Be With You), Disney+’s latest animated entry in the Star Wars universe is a Clone Wars spinoff that will also feature a very familiar face (well, voice) from The Mandalorian. After the jumbo 70-minute premiere, regular episodes will continue on Fridays starting May 7th.

Girls5eva: Sara Bareilles, Renée Elise Goldsberry, Busy Philipps, and Paula Pell star as the members of a one-hit wonder girls group from the 1990s who decide to get the band back together for a second chance at stardom. The show is created by Meredith Scardino, who has previously written on Unbreakable Kimmy Schmidt, SNL, and The Colbert Report. (Peacock)

From Cradle To Stage: Look, I’m not gonna sugarcoat this. This is a docuseries in which Dave Grohl and his mom going on a road trip to talk to other rock star moms. It’s AGGRESSIVELY adorable, and timed for Mother’s Day, and… did I mention it’s directed by human hardcore marshmallow Dave Grohl? (Paramount+)

Shrill (Season 3): Aidy Bryant’s great comedy is entering its final season this month. After dumping her childish boyfriend at the end of last season, is Annie finally on track find the happiness she’s been looking for in work and life? (Hulu)

Jupiter’s Legacy: Netflix may no longer the home of Marvel’s more serious television fare, but that doesn’t mean it’s out of the superhero game entirely. This month it’s launching a new Mark Millar joint, about aging superheroes trying to prepare their kids to be the next gen protectors of humanity. Or… something. I dunno, I’m stuck on old man Josh Duhamel honestly.

Castlevania (Season 4): It’s the final season for this silly vampire video game cartoon show, and frankly I shall miss it. (Netflix)

Hacks: If I had to pick one show that doesn’t involve an animated floating murderous Patton Oswalt to highlight this month, I’d have to go with this one. Sure, I’d be excited for any show that gives Jean Smart the spotlight she so richly deserves, but Hacks just may offer a scenario worthy of its star. Smart plays Deborah Vance, a legendary Las Vegas comedian, who brings on a talented twentysomething writer to help her freshen up her act. It’s being described as a story of “dark mentorship” and I really wanna know how dark it gets. (HBO Max)

The Woman In The Window: Amy Adams sees Julianne Moore get killed. Or DID SHE?! This thriller about maybe not staring into other people’s houses is directed by Joe Wright (Atonement) and also stars Gary Oldman, Brian Tyree Henry, Jennifer Jason Leigh, Anthony Mackie, and US Agent himself, Wyatt Russell! (Netflix)

Those Who Wish Me Dead: Angelina Jolie protects a traumatized boy from mysterious assailants (Littlefinger and About A Boy). Meanwhile Jon Bernthal is also there but maybe as the good guy? Directed by Taylor Sheridan, this one is in theaters and on HBO Max on the same day.

Marvel’s M.O.D.O.K.: WE MADE IT! Phew, let’s talk about this. It’s, um… about a floating murder dude, voiced by Patton Oswalt. Only he’s stop motion animated, kinda like Robot Chicken. And yeah, he’s a Marvel comics villain, but the show is about his crumbling marriage and midlife crisis. But funny! After The Falcon And The Winter Soldier, we’ve EARNED some funny.

Cruella: Emma Stone stars as Disney’s puppy coat-loving villain, but before she turned evil! Also, maybe Emma Thompson had something to do with it! (In theaters and on Disney+ with premier access)

Lucifer: Season 5 Part 2: Tom Ellis is very, very charming, and Dennis Haysbert is excellent God-casting. I mean, he’s no Chuck, but still — I dig it. (Netflix)


← Review: 'Alien on Stage' Is Exactly What You Want When You Hear "A Documentary About A Local Theater Production of 'Alien'" | Ben Affleck & Jennifer Lopez Are Probably Back Together Again →